Alexandre Dumas was one of the most prolific French novelists of the nineteenth century whose writing encompassed more than 37 million written words featuring a staggering 4,000 main characters and 9,000 secondary roles. The 1844 first edition of The Three Musketeers alone totals 228,402 words and that is just a small fraction of his entire voluminous collection that gives real meaning to the phrase labelling Alexandre a writing machine bar none.

The Musketeers have become the stuff of legend with their adventures etched into the minds of countless generations worldwide. His works have been made into in excess of 200 movies with the Musketeers alone inspiring more than 30 film versions whilst his novels have been translated into over 90 languages. The swashbuckling writing continued and who could forget the epic tale of The Count Of Monte Cristo with a story line of melodramatic twists of fate as the hero gets back on his feet and plots vengeance on those he tried to destroy him.

Dumas was a larger than life character whose extravagance and generosity saw him squander the fortunes that he earned through his writing. He loved the arts, fine dining and he had a penchant for beautiful ladies who he would shower with expensive gifts. In his lifetime he had hundreds of affairs with many illustrious ladies of his day becoming his mistresses including: Marie-Laure Labay, Mélanie Waldor, Belle Kreilssamner, Emma Manoury-Lacour, Isabelle Constant, Marie de Fernand, Emilie Cordier, Olympe Audouard, Fanny Gordon and Addah Menkken.

Alexandre came in for some criticism with accusations of creating pulp fiction but his literary successes speak volumes as do the millions of books he has sold worldwide. In 1970 a Paris metro station lying in between the 11th and 20th arrondissements was named the Alexandre Dumas Paris Métro station as a geographical legacy in his honour. As you would expect from such an adventurous and colourful writer he was never short of a quick witted quip so here is my compilation of 15 of the best Alexandre Dumas quotes

French President Jacques Chirac was impressed to say: "With you, we were D'Artagnan, Monte Cristo, or Balsamo, riding along the roads of France, touring battlefields, visiting palaces and castles, with you, we dream"

The Russian author Leo Tolstoy was quoted as calling Dumas a: "Novelising historian"

The acclaimed French writer Victor Hugo rated him highly: "No figure in this century has exceeded the popularity of Alexandre Dumas. His successes were not merely successes, he made them triumphs; They had the brilliance of the brass band about them" 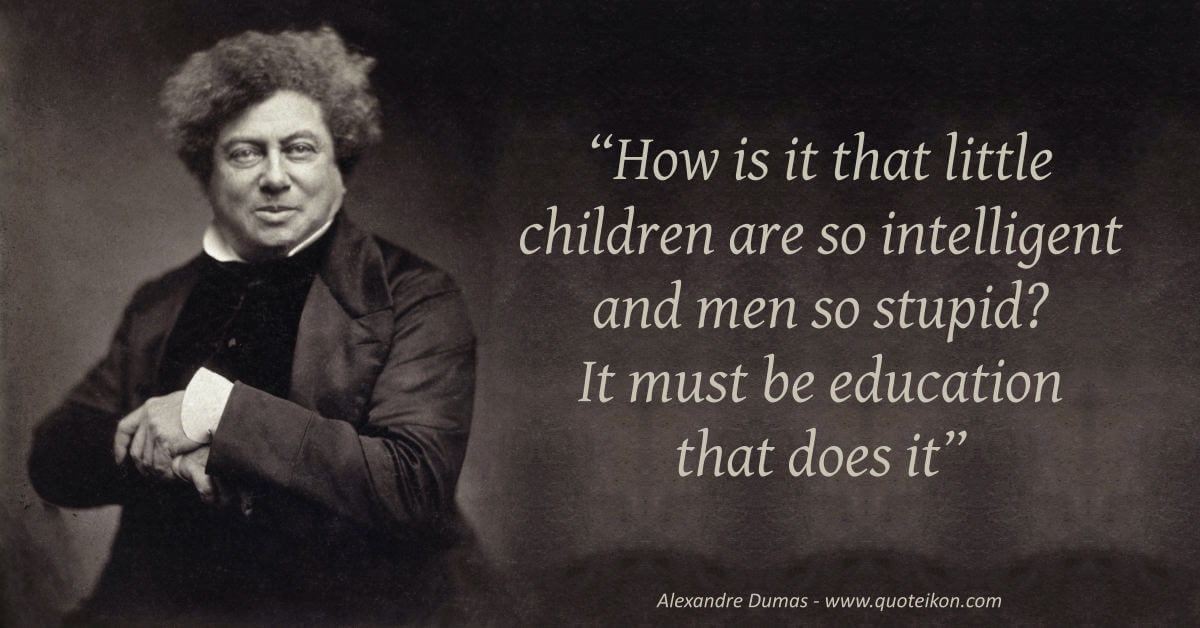