Emile Zola rose to the top of the French literary world in the latter part of the 19th century as he established himself as the leading light of the literary school of naturalism. His 1877 novel L’Assommoir stirred Parisian society as he plumbed the depths of alcoholism and poverty and his subsequent works covered all aspects of French life that gripped the French reading classes.

Zola's most controversial novel was L’Oeuvre published in 1886 as it was loosely based on his childhood friend Paul Cézanne. L’Oeuvre revealed the bohemian lifestyle of the French art clique exposing the artistic self doubt that haunts so many great painters, but it went further than scratching the surface as his descriptions cut deep into the personality of the gifted artisans.

The obsessions with nudity and passions for all things feminine and beautiful yet never satisfied with the resultant nude painting so on to the next revealed a pent up frustration within the artist about his own sexuality. Cezanne never forgave Zola for L’Oeuvre as this was the book that shook Paris society to the core.

Years later Zola published a story on the front page of the Paris daily L'Aurore whereby he accused the upper echelons of the French army of a massive injustice by covering up evidence that would have vindicated a Jewish officer called Alfred Dreyfus whose claim of innocence to the charge of treason saw him wrongly convicted.

The embarrassed government allowed Zola to slip out of the country rather than risk a trial and offered Dreyfus a deal where he would be pardoned and set free providing he admit his guilt, Dreyfus reluctantly accepted.

Zola eventually returned to Paris and in 1902 he died of carbon monoxide poisoning and his death has been the subject of controversy with many suspecting foul play by French right wing fanatics still outraged at Zola's defiant stand for truth and justice for a Jew called Dreyfus.

He was interred in Montmartre Cemetery until his body was later exhumed in 1908 for burial in The Pantheon which was the final resting place for the great and the good of the French nation. The best writers often concoct great one liners so here is my compilation of 15 of the best Emile Zola quotes.

The French poet Anatole France complimented him on the magnitude of his work: "He was a moment in the conscience of Man"

In 1898 The Times newspaper in London described him thus: "Zola's true crime has been in daring to rise to defend the truth and civil liberty... for that courageous defense of the primordial rights of the citizen, he will be honored wherever men have souls that are free"

The law professor Donald E. Wilkes Jr. was impressed to say: "J'Accuse! (I Accuse!), rightly has been judged a "masterpiece" of polemics and a literary achievement of imperishable beauty" 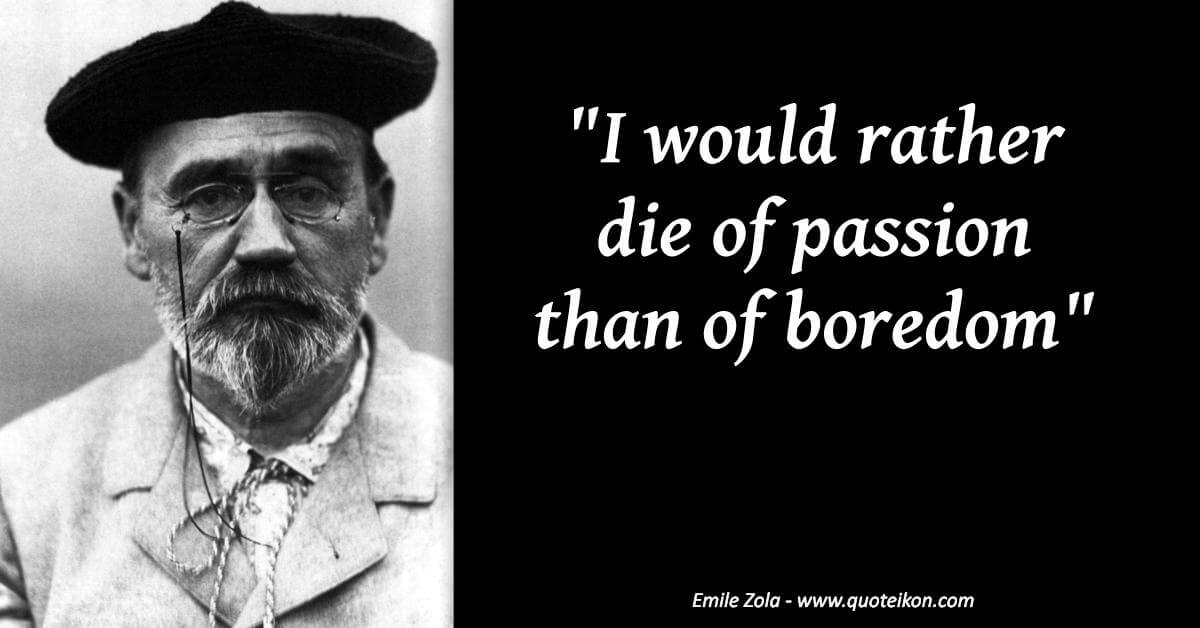