Some men are born to be emperors. Some men are born to topple dynasties where emperors have ruled for centuries. One such man had a dream for a China free from the bondage of imperial rule that would see the fall of the Qing Dynasty. His name was Sun Yat-sen, he was the man who inspired a revolution that bestowed him the honorific title of Father Of The Nation.

Revolutions rarely just happen. There are reasons. There is a build up of frustrations, there will be evidence of injustices and there will be economic hardships. People tend to accept these things unless they are guided to open their eyes to viable alternatives, this is the biggest challenge, upsetting the status quo. What's more it is a tough task to convince people to join a revolution when they know the consequences of standing against a brutal regime.

These are the challenges facing all well meaning revolutionaries determined to improve the welfare of a people. These were the daunting challenges facing Sun Yat-sen as his frustrations at the Qing Dynasty grew diametrically to the Emperors refusal to accept advanced western concepts and technologies that would benefit the nation.

Yat-sen was born to peasant stock and received a traditional Chinese elementary education. At thirteen he left China to live with his elder brother Sun Mei in Honolulu, Hawaii. His education received a boost by learning English and benefitting from the western syllabus at King David Kalākaua school and Oahu College. Yat-sen left Hawaii aged 17 in 1883 and returned to China for a short spell until he went to Hong Kong to further immerse himself in his studies.

His years in Hong Kong were highly influential in moulding the thinking of Yat-sen as he combined a diverse education, both culturally and linguistically, with his derived inspiration taken from the classical school of Confucianism which he studied in his spare time.

He was surrounded by like minded souls who also yearned for revolution to bring about the modernisation of China. His peers were: Yeung Hok-ling, Chan Siu-bak and Yau Lit and collectively they were to become known as "The Four Bandits". They fed off each others discourse of dissatisfaction with the archaic thinking of the Manchu dynasty of Qing and they would all play their parts in forthcoming revolutionary activity.

Dissatisfaction with the Qing Dynasty was nothing new. The Manchu Qing had been putting down rebellions for much of the nineteenth century. The common denominator of insurgency was failure. Sun Yat-sen realised a people rising up in anger and frustration could only flirt with small victories before being crushed. He recognised what was needed was a political ideology that the people could understand, relate to and actually benefit from.

Without this, all rebellions were rudderless fits of pique that lacked feasible objectives. To form a successful revolution the objectives have to have clear benefits for the people and they must be championed by the cohesive charisma of a respected leader.

This was the formulation of thought that led Sun Yat-sen to create and develop what is famously known as: The Three Principles Of The People. The basis of the three principles were: nationalism, democracy and welfare of the people.

Yat-sen was inspired to develop these principles as his political philosophy during his time in exile including just under three years spent in Europe raising funds and awareness for the cause. Although these three principles appeared political in nature they were more ideological in reality. They were an appeal to action backed by sound reasoning. There was an undercurrent of faith in his wisdom that was appealing to a culture steeped in the history of three millennia.

In Hong Kong, Yat-sen was also introduced to the radical thinking of the Furen Literary Society. Their leader, Yeung Ku-wan, was an inspired writer who was disseminating the ideals of revolution to overthrow the imperialists and establish a republic in China.

Sun Yat-sen had set up the Revive China Society in 1894. Yeung Ku-wan swore an allegiance, and similarly, all new members had to swear an oath which read: "Expel Tatar barbarians, revive Zhonghua, and establish a unified government". The rhetoric was getting stronger. It was only a matter of time before the words would become deeds.

Both men went onto lead failed uprisings. The first was the Guangzhou uprising on the 26th October 1896. Unfortunately their plans were leaked and 70 of their members were rounded up by the Qing authorities.

The second uprising came four years later and the Huizhou uprising in Guangdong on 22nd October 1900 was also doomed to end with the Manchu Qing authorities prevailing. Sun Yat-sen was now an enemy of the imperialist state and living in exile. Yeung Ku-wan was back in Hong Kong but he succumbed to an assassins bullet on 10th January 1901. He was killed in his own home by a Qing government agent.

In 1904 Yat-sen was in Tokyo where he formed an underground resistance movement called the Tongmenghui. This was an amalgamation of various Chinese revolutionary groups with a common goal to usurp the imperialist Qing Dynasty. With the birth of the Tongmenghui came a new oath which obliged members to: "overthrow the Manchu government, consolidate the Republic of China, and implement the Min Sheng Chu I" (3 principles). The Tongmenghui set up branches across SE Asia with the Singapore and Penang chapters being especially influential by spreading awareness and raising funds.

1907 was a very active year for Sun Yat-sen. There were four uprisings including the Zhennanguan uprising in Guangxi that failed after seven days of fighting. The uprisings of 1908 did not fare much better with the Qin-lian and Hekou revolts both put down by the Qing government. The failures led to some anti Sun Yat-sen sentiment. Disillusioned but undaunted Yat-sen soldiered on by publically countering criticism and increasing the rhetoric in his revolutionary speeches.

Another round of fund raising in Penang subsidised the second Guangzhou uprising on 27th April 1911. Again this was doomed to fail leading many to think this imperial system of government was too entrenched to be removed by revolution. Sun Yat-sen was still resolute. He embarked on another round of foreign fund raising and in an irony typical of life's histrionics he was absent during the first uprising that proved successful.

On 10th October 1911 his second in command, Huang Xing, led a military uprising at Wuchang. The following day the whole city of Wuchang was under the control of the revolutionaries. A military government in Wuchang was announced and the Xinhai Revolution of 1911 was underway. Sun Yat-sen was raising money in America and immediately set sail back to China to rejoin the revolution.

This was the beginning of a series of revolts against the Manchu Qing dynasty who were in decline for many years due to their ineffectual government that was reluctant to the notion of modernisation and displayed an arrogant disdain towards the people.

Amidst the adrenaline fuelled euphoria of the revolution one man stood tall in the minds of an expectant nation. Sun Yat-sen had been unanimously elected as the first provisional president on 29th December 1911. Yat-sen agreed, but he vowed to step down once a constitutional national assembly was set up and a permanent leader was selected.

He was a man of honour, principle and conscience. Sun Yat-sen held onto the reins of power for nine short weeks. His aim had been to overthrow the Qing Dynasty and this outcome was now not in doubt. He wanted the emperor and his dynasty removed from power but not killed so Yat-sen offered them a settlement if the emperor abdicated.

Sun Yat-sen proposed to resign as President in favour of the Prime Minister of the Imperial Cabinet, Yuan Shikai. This was the olive branch that convinced the advisors to the emperor that abdication was his family's best option. It was a selfless act by Yat-sen to prevent further bloodshed as the imperialists would have fought to the last man to save their emperor and his failing dynasty.

Yat-sen knew in himself that he would be a good leader but he sacrificed his opportunity to lead the country.

Whilst October 10th 1911 was the pivotal moment. February 12th 1912 was the last day of the revolution. In another of history's great ironies it was the day when a six year old child emperor, Puyi, abdicated the throne of an empire that brought the curtain down on 2,000 years of imperial rule. This marked the beginning of the Chinese republican era.

His life work was dedicated to championing the cause to an independent and democratic China, albeit with an oriental slant of ancient culture. Yat-sen had found inspiration from many sources, but one line always stood out in his mind: "government of the people, by the people, for the people". It was from Abraham Lincoln's famous Gettysburg Address and it inspired Sun Yat-sen to become the ideological bridge between the ancient knowledge of the Chinese sages and the needs of modern day China.

Both the Communist Mao Zedong and Kuomintang leader Chiang Kai-shek claimed the Three Principles by Sun Yat-sen to be the basis of their political ideologies. To this day, Yat-sen is highly venerated in both Taiwan and China giving him a unique legacy amongst Chinese leaders of the twentieth century.

Throughout his journey sacrifice was a close companion of Sun Yat-sen. He spent sixteen years in exile and went from one failed uprising to the next with the vital energy, enthusiasm and dogged determination that kept the revolution alive even in its darkest moments of despair. His was the spirit of the people, by the people and for the people. The name of Sun Yat-sen has been carved into the annals of Chinese history and he will be forever remembered as the father of the nation and one of the greatest revolutionaries of the 20th century.

His command of an audience was as compelling as his ideology on revolution as his words of wisdom influenced his peers to rise up against seemingly insurmountable odds and inspired me to compile this list of 22 of the best Sun Yat-sen quotes.

Xi Jinping was praiseful: "Mr Sun was a great patriot, and his loudest slogan of all was to call to rejuvenate China"

Vladimir Lenin was inspired to say: "The real emancipation of the Chinese people from age-long slavery would be impossible without the great, sincerely democratic enthusiasm which is rousing the working masses and making them capable of miracles, and which is evident from every sentence of Sun Yat-sen’s platform"

The author Orville Schell gave this assessment: "Ultimately, like so many other reformers had late in their lives, Sun became a proponent of protecting China as a traditional culture and the Chinese people as a race. He had hoped that with the end of the alien Manchu Dynasty, the country would achieve a new state of equipoise. But as the situation continued to unravel, he, too, found himself turning to those very reserves of traditional culture and social structure for support"

Wing Chin Foo, who was the president of the Chinese liberty league stated: "Had the Tartar government our interest at heart, instead of their own, they would have selected just men as Sun Yat Sen at the head of their recent affairs with Japan"

The author John Delury shared this observation: "What Sun seemed to be reaching for in his third principle was some expression of sympathy for the plight of ordinary Chinese"

The Westminster Gazette reported in 1896: "Whatever else may be said of Sun Yat Sen, he knows the truth about his country"

Dr. Joseph Ting, of Hong Kong's Museum of History recognised the importance played by the former island state: "We want to tell people the role of Hong Kong in the shaping of modern China and that starts with the shaping of Dr. Sun Yat-sen's ideas" 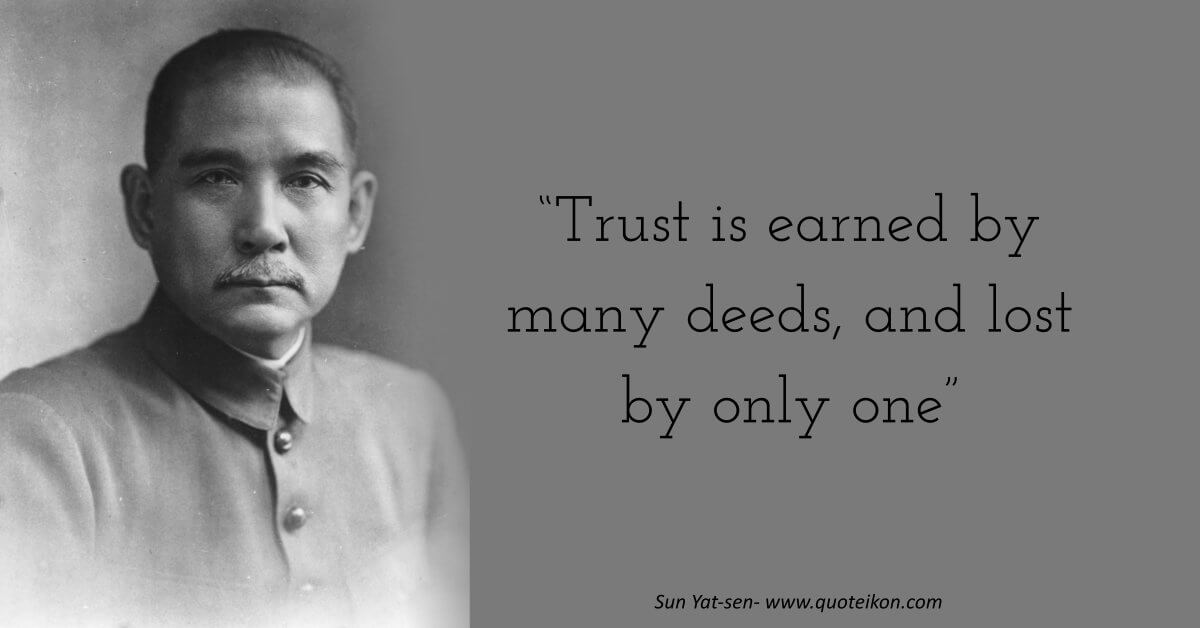