Renowned today as the father of existentialist thought, Kierkegaard was a philosopher of irony who squeezed himself into a vast number of pseudonyms in order to view the world from another man's shoes. His pseudonyms eased the passage to create different forms of expression from the view point he was considering.

His 360 degree study of philosophical thinking shone a light across the spectrum of his mind that explored angst, fear, joy and suffering. All his neural pathways seemed to lead to faith. He concluded that reason alone would never provide all the answers, but, by exhausting rationality the only rational thing to do would be to take a leap into faith.

Not just a philosopher, Soren Kierkegaard was a poet and a theologian all rolled into an intensity of thought that drove the question how to be a good human being and live a truthful life.

His written output was voluminous with more than fifty titles pondering a rich tapestry of complex philosophical notions that touched the thinking minds of subsequent generations.

The philosopher Karl Jaspers pondered his place in the historical hierarchy of philosophy: "I approach the presentation of Kierkegaard with some trepidation. Next to Nietzsche, or rather, prior to Nietzsche, I consider him to be the most important thinker of our post-Kantian age"

A scholar, Paul Holmer, shared this interesting perspective: "Kierkegaard's constant and lifelong wish, to which his entire literature gives expression, was to create a new and rich subjectivity in himself and his readers"

The American philosopher Jerry Fodor summed him up thus: "A master and way out of the league that the rest of us play in"

The writer Adam Phillips shared this view: "Kierkegaard’s life and writing are a testament to the cruelty, the generosity and the inventiveness of those who believe in the Real Thing, the prophets of authenticity"

A theologian, Rabbi Milton Steinberg, left this cryptic advice: "Søren Kierkegaard addressed himself neither to Jews nor to Judaism. But they have overheard him. In part because they could not help it... Jews are well advised to be on the alert for what they can learn not only about him but about themselves also"

An American philosopher, Mortimer J. Adler, opined this opinion in 1962: "For Kierkegaard, man is essentially an individual, not a member of a species or race; and ethical and religious truth is known through individual existence and decision-through subjectivity, not objectivity"

The writer Gordon Marino shared this rueful observation: "In an age when all psychic life is being understood in terms of neurotransmitters, the art of introspection has become passé. Galileos of the inner world, such as Soren Kierkegaard, have been packed off to the museum of antiquated ideas"

Marino then mused on what the Danish philosopher would make of today's world: "If Kierkegaard were on Facebook or could post a You Tube video, he would certainly complain that we, who have listened to Prozac, have become deaf to the ancient distinction between psychological and spiritual disorders, between depression and despair"

The scholar Clare Carlisle spoke of his industrious nature: "He was extraordinarily prolific, producing on average a couple of books each year during the 1840s. Some of these are provocative, genre-defying works on philosophical and religious themes"

The German theologian Otto Pfleiderer aired this view in 1887: "Kierkegaard can only find true Christianity in entire renunciation of the world, in the following of Christ in lowliness and suffering especially when met by hatred and persecution on the part of the world"

The Austrian philosopher Ludwig Wittgenstein was impressed to say: "Kierkegaard was by far the most profound thinker of the last century. Kierkegaard was a saint"

Wittgenstein then dug deeper: "Kierkegaard is far too deep for me, anyhow. He bewilders me without working the good effects which he would in deeper souls"

The Danish scholar Georg Brandes pondered this comparable question that highlighted the visionary mind of Kierkegaard: "There are two types of the artistic soul. There is the one which needs many varying experiences and constantly changing models, and which instantly gives a poetic form to every fresh incident. There is the other which requires amazingly few outside elements to fertilise it, and for which a single life circumstance, inscribed with sufficient force, can furnish a whole wealth of ever-changing thought and modes of expression. Soren Kierkegaard among writers, and Max Klinger among painters, are both great examples of the latter type. To which did Shakespeare belong?"

The scholar Maurice S Friedman noted the influence of the Danish philosopher: "Probably the strongest influence on Buber's concept of realization, however, was the existentialist philosophy of Soren Kierkegaard"

The philosopher Christopher Sverre Norborg described him thus: "Kierkegaard does not deny the fruitfulness or validity of abstract thinking (science, logic, and so on), but he does deny any superstition which pretends that abstract theorizing is a sufficient concluding argument for human existence"

The Austrian writer Friedrich von Hügel shared this description: "Kierkegaard, the deep, melancholy, strenuous, utterly uncompromising Danish religionist, is a spiritual brother of the great Frenchman, Blaise Pascal, and of the striking English Tractarian, Hurrell Froude, who died young and still full of crudity, yet left an abiding mark upon all who knew him well"

Perhaps Carl Jung should have looked more closely at the political arena where they are bountiful: "For all its critical analysis philosophy has not yet managed to root out its psychopaths. What do we have psychiatric diagnosis for? That grizzler Kierkegaard also belongs in this galere"

The scholar John George Robertson spoke of a void in the view of the English-speaking world: "The Norwegians, Ibsen and Bjørnson, have exerted a very real power on our intellectual life, and for Bjørnson we have cherished even a kind of affection. But Kierkegaard, the writer who holds the indispensable key to the intellectual life of Scandinavia, to whom Denmark in particular looks up as her most original man of genius in the nineteenth century, we have wholly overlooked"

The author Colin Wilson contemplated his intense stance: "If we think of Kierkegaard, of Nietzsche, of Hölderlin, we see them standing alone, outside of history. They are spotlighted by their intensity, and the background is all darkness. They intersect history, but are not a part of it. There is something anti-history about such men; they are not subject to time, accident and death, but their intensity is a protest against it"

The Austrian psychologist Wilhelm Stekel labelled him as: "the philosopher of Don Juanism"

The German philosopher Walter Kaufmann was impressed to say: "I know of no other great writer in the whole nineteenth century, perhaps even in the whole of world literature, to whom I respond with less happiness and with a more profound sense that I am on trial and found wanting, unless it were Søren Kierkegaard"

The theologian Karl Barth drew inspiration from his work: "If I have a system it is limited to a recognition of what Kierkegaard called the 'infinite qualitative distinction' and to my regarding this as possessing negative as well as positive significance"

The author William Hubben made this interesting comparison: "Logic and human reasoning are inadequate to comprehend truth, and in this emphasis Dostoevsky speaks entirely the language of Kierkegaard, of whom he had never heard" 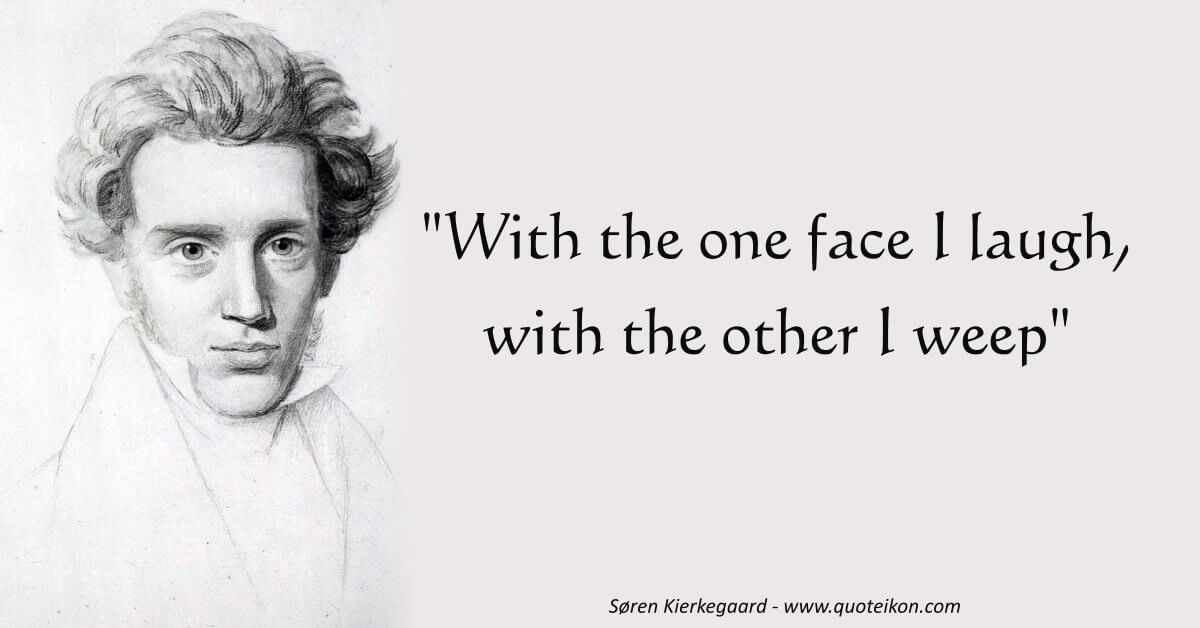