The Legacy of Karl Jaspers

The Science of Uncertainty

Jaspers was an existentialist who embraced the feelings of uncertainty as he believed it unshackled human existence. He recognised that it was futile to rationalise uncertainty as it was a condition to be understood rather than to be overcome.

Live and let live by embracing uncertainty rather than raging against it. He argued that the rise of the individual can only traverse through the path of uncertainty to gain traction with spiritedness, intellectuality and vitality, it is the essence of freedom, truth and justice that defines people by what they are not or not yet.

Few men in post WWII Germany held a moral authority in such high esteem as Karl Jaspers. He had been persecuted by the Adolf Hitler Nazi regime yet he still chose to remain in Germany despite losing his position as a highly celebrated professor of philosophy at the University of Heidelberg.

Post war, he was offered to serve as the minister of culture, but he declined and chose to follow his preferred path as encompassing the philosophical life of a scholar.

In an effort to help Germans confront their past, he wrote The Question of German Guilt (1946) where he broached the sensitive subject of political guilt which was essentially a proverbial prison of the mind that needed to be unlocked and discussed rationally. All German survivors of the Nazi era were to bear an equal responsibility which would become known as a collective guilt and this would become the lasting legacy of Karl Jaspers.

The political philosopher Hannah Arendt was in agreement with Jaspers about Marxism: "I’m preparing my Princeton lectures and a lecture for Harvard. At Princeton I’ll talk about Marx in the tradition of political philosophy. The more I read Marx, the more I see that you were right. He’s not interested either in freedom or in justice"

Hannah Arendt went on to share this observation: "the only successor … Kant has ever had"

The author Ronny Miron expressed this opinion: "Jaspers' search was inspired by a constant experience of dissatisfaction, which directed the self to transcend every present understanding of the self and to look for an improved one"

The philosopher Kurt Hoffman shared this assessment: "Jaspers’ primary concern is to resist the tendency of making one of the spheres absolute and to subject the others to its logic and its laws. Philosophy must avoid the pitfalls of materialism and biologism as well as those of pan-psychism and radical existentialism"

His former student Golo Mann described his moral authority in post WWII Germany as Jaspers: "had not spoken or, so long as he was still allowed, published a single word that might have been interpreted as support for tyranny"

The scholar István Király V made this observation: "Jaspers is not constrained by his Westernness, he does not want to get rid of it and become Eastern in his spirit. But for a decision made at this level it is necessary to keep the ciphers floatating, not going beyond them."

The author James Collins gave this appraisal: "Jaspers himself remained unconvinced by the scientific pretences of the reigning philosophies, especially positivism and idealism"

The researcher Tsutomu Kumazaki shared this view: "Jaspers did not mean that understandable psychic phenomena were not amenable to causal explanation"

The philosopher Walter Kaufmann spoke of the influence of Kant: "Jaspers is too often seen as the heir of Nietzsche and Kierkegaard to whom he is in many ways less close than to Kant ... the Kantian antinomies and Kant's concern with the realm of decision, freedom, and faith have become exemplary for Jaspers. And even as Kant "had to do away with knowledge to make room for faith," Jaspers values Nietzsche in large measure because he thinks that Nietzsche did away with knowledge, thus making room for Jaspers' philosophic faith"

The German explorer Heinrich Barth described him thus: "The first and the last Kantian"

The scholar Jeffrey M. Dudiak shared these thoughts: "Much of his work, and particularly much of his later work, specifically addressed this new world situation and sought to find a ground upon which humanity could found itself as a co-humanity and thereby avoid the disasters of nuclear confrontation, totalitarianism, and dehumanization that Jaspers believed the use of the new technologies made possible"

The author José Manuel Heleno opined this comparison: "There is a conceptual thread gathering the philosophy of Plato, Nishida Kitaro and Karl Jaspers. In all the mentioned authors we find this 'third kind' (Plato) which is not possible to fully understand with reason or determine it clearly. This 'third kind' - the Greek khora , like Plato says -, the absolute nothing according to Nishida, the encompassing in Jaspers' theory, the horizon of horizons, is the other side of the philosophy that we should scrutinize from east to west" 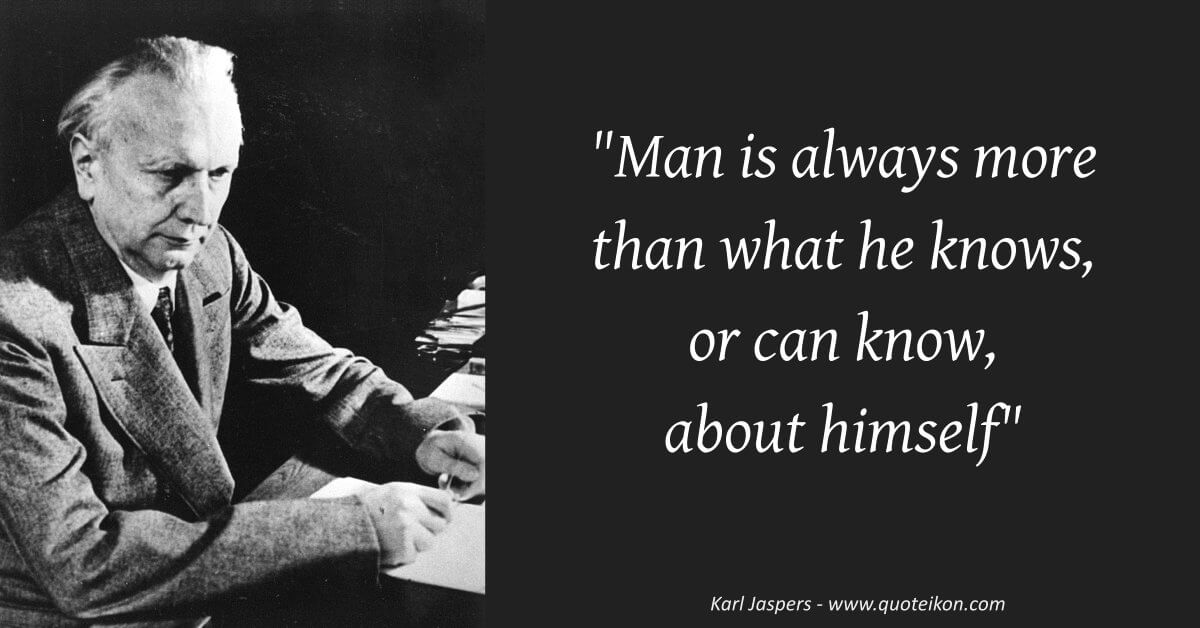