Rudyard Kipling was a child of the British empire whose experience of imperialism would have a long lasting effect on both his writing and his personal life. He was born and brought up in Bombay until the age of 5 when he returned to England to start his education in Portsmouth. He and his sister Alice were to stay at the house of a couple who cared for children of Britons who were working in India.

The next few years were to be the unhappiest time of Rudyard's life as his guardians neglected, bullied and scolded the children on a daily basis. At the age of 10 his parents sent him to a tough boarding school that specialised in preparing children for serving in the armed forces.

At 16 Kipling set sail back to India and a career as a journalist and short story writer was about to unfold as the years of travel that followed molded the mind of the young Kipling into the literary genius he was to become. For 6 years he worked for various publications and in 1889 he left India to travel and experience 4 Asian countries before crossing the Pacific to explore the U.S. and Canada until finally crossing the Atlantic to England. He settled in London where he got down to work publishing short stories, novels and some memorable poetry.

From 1890 onwards he maintained the prolific literary output but the quality of the narrative grew exponentially which led to the poems "Gunga Din" and "Mandalay" in 1890, "The Jungle Book" (short stories) in 1894 and his jewel in the crown which is possibly the best poem ever written in the modern era "If" in 1895 and published in 1910. "If" was written as a proud father speaking to his son in a tone that summed up the colonial era of Victorian stoicism, it is a spine tingling conjecture of inspiration that characterises the rectitude of perseverance against all odds.

Kipling became known as the Poet of the Empire and with the onset of WW1 he was highly active in the propaganda war against the Germans. His own son John, was 18 years of age and desperate to enlist but his poor eyesight saw him fail time after time. Rudyard intervened using his celebrity status to pull some strings and John enlisted with the Irish Guards and in 1915 after only 2 days at the Western Front he was killed in battle at Loos.

This devastated his father who never recovered from his death and he never regained the literary genius that had been unleashed for 2 decades prior to WW1. He became a tortured soul who often thought, what if, I never intervened. As you would expect from a literary genius he was good for a one liner so this is my compilation of 20 of the best Rudyard Kipling quotes

The great Statesman Winston Churchill was moved to say: "No one has ever written like Kipling before and his work, with all its characteristics and idiosyncrasies… has been successfully imitated by none"

The author George Orwell was less than sympathetic in his assessment: "In the stupid early years of this century, the blimps, having at last discovered someone who could be called a poet and who was on their side, set Kipling on a pedestal, and some of his more sententious poems, such as ‘If’, were given almost biblical status. But it is doubtful whether the blimps have ever read him with attention, any more than they have read the Bible. Much of what he says they could not possibly approve. Few people who have criticized England from the inside have said bitterer things about her than this gutter patriot"

The poet T.S. Eliot described him thus: "An immense gift for using words, an amazing curiosity and power of observation with his mind and with all his senses"

American author Mark Twain commented quite dryly: "He is a stranger to me, but he is a most remarkable man - and I am the other one. Between us, we cover all knowledge; he knows all that can be known and I know the rest"

The author Henry James was inspired to write: "Kipling strikes me personally as the most complete man of genius, as distinct from fine intelligence, that I have ever known"

The poet Randall Jarrell put some perspective on his talent: "After you have read Kipling's fifty or seventy-five best stories you realize that few men have written this many stories of this much merit, and that very few have written more and better stories"

The writer H. G. Wells was not so impressed: "I like to know about the brain history of Mr. Rudyard Kipling, whom also I have never met. He is to me the most incomprehensible of my contemporaries, with phases of real largeness and splendour and lapses to the quality of those mucky little sadists, Stalky and Co. ... He has an immense vogue in the British middle-class and upper-class home ; he is the patron saint of cadet corps masters, an inexhaustive fount of sham manly sentiment, and one of the most potent forces in the shrivelling of the British political imagination during the past third of a century" 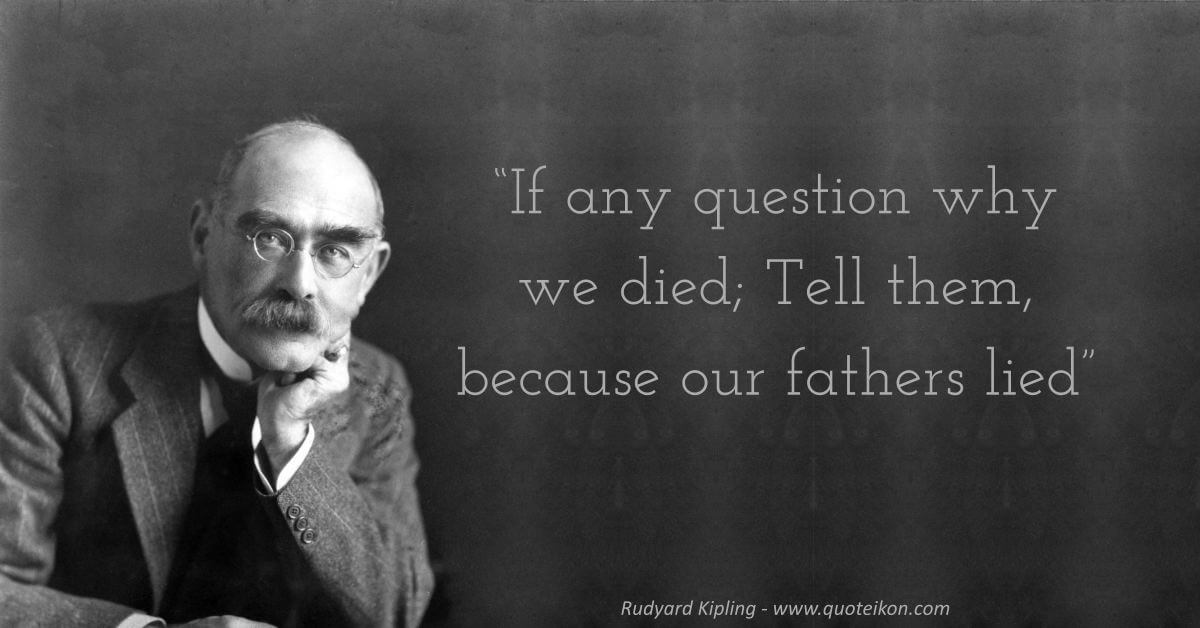