Lauded as an unwitting neologist and creative genius, the longevity of his words and expressions in politics and popular culture have left an indelible mark on the lexicon of the English language. The introduction of big brother and the ministry of truth investigating thought crimes via the thought police have inspired countless political theories as they became part of the fabric of the authoritarian nature of dystopia. His name was George Orwell, the novelist who wrote his way into the annals of the most influential authors of the twentieth century.

Since he penned Nineteen Eighty-Four in 1948 there are hotel chains that refuse to name a room 101. Orwell identified newspeak and labelled the twisted tongued tattlers of ambiguity as cads of coercion long before the innocent ears of the public were tainted by Trump speak.

Doublethink can easily translate into the alternative facts of the blonde quiffed ex-incumbent of Pennsylvania Avenue lording it over another Orwellian word for his people: proles. The literary influence of George Orwell continues to endure through every flavour of political persuasion despite their inkling for right or left ideologies created primarily for the unperson.

After the publication of Nineteen Eighty-Four in 1949, Winston Churchill admitted he read the novel twice. Churchill recognised the connection between the novel and the warnings he gave about the Joseph Stalin inspired Soviet Union. Both Orwell and Churchill had an historical dislike of authoritarian regimes.

George Orwell tasted first hand the foul rhetoric of Hitler and Stalin. He determined to divulge his disdain for these diabolical regimes through the power of his pen. His pre WW2 writing was strong. But it could not cut the mustard of his Spanish civil war experiences that would influence the giddy heights of the Orwellian literary output post WW2.

But who was George Orwell? How did he develop such a cynical pen that still holds sway in the minds of every subsequent generation?

George Orwell was a true son of the British empire. He was born Eric Arthur Blair, his father Richard Walmesley Blair, worked in the opium department of Indian civil service and his mother Ida Mabel Blair was raised under British rule in Burma.

When Blair was in his second year, his mother relocated him to Oxfordshire in England where he was brought up. He received his education locally and later at St Cyprian's School, Eastbourne. In 1917 an opportunity arose for him to go to Eton on a scholarship where he stayed until 1921.

Although Orwell had already showed literary promise as a poet and an essayist he didn't make the grade to achieve a university scholarship. So George decided to explore the parts of the empire he had heard so much of from his father and mother. He joined the Indian Imperial Police with his first posting to be in Burma where his maternal grandmother lived.

Orwell served from 1922 until 1927 until he contracted dengue fever that has the rather notorious moniker of break bone disease. He was allowed to take leave back to England and promptly resigned from the imperial police to follow what he deemed was his true vocation in life and become a writer.

His time in South East Asia gave him the inspiration for his first novel Burmese Days (1934) and various other essays as he honed his literary style.

Back in England Blair initially spent his time at his parents retirement home in Southwold, Suffolk. It was the River Orwell in Suffolk that inspired Blair to adopt the pseudonym George Orwell.

The 1930's and the Spanish civil war in particular, were to shape the thinking of Orwell and influence his creative writing on a political plane he had never previously contemplated.

Orwell sympathised with the republican cause. He left for Spain making a conscious decision to fight against the military uprising of the Franco fascists. Orwell joined a group called the Party Of Marxist Unification (POUM) but he soon became despondent at the in-fighting within the republican ranks.

In April 1937 George was in Barcelona and witnessed the Communist political attacks on the POUM. Orwell was aghast at the stories the communist press were running which labelled him and other members of the POUM as fascists. There was a tense divide which shocked him as the common enemy was supposed to be General Franco and his Nazi allies.

Orwell returned to the front line only to be shot in the neck and hospitalised. Back in Barcelona the POUM had been outlawed by the communists so George escaped on a train before he was rounded up.

From this moment on, Orwell took every opportunity he could find to attack the Stalin regime. He continued his attacks during WWII when Stalin became an ally against the Nazis. The despisal of both regimes was strong. It gave George, the novelist, the focus to set the cross hairs of his pen on all diabolical dictatorial suppressors in a satirical surmisal to sum up their wanton desire to stay in power.

The classic novels Animal Farm and Nineteen Eighty-Four were the result.

George Orwell's exposure to both the Nazi and Soviet ideologies at the front line of war were an eye opener. Both were responsible for experimentations in warfare by proxy in Spain.

Then there was the loss of millions of lives in concentration camps and gulags. The fury of Orwell was borne in the hypocrisy and hatred of the authoritarian dictators of his era.

George concentrated his pen in the inkwell of personal experience. He had witnessed and established dangerous truths that became beyond doubt. It forged the fidelity of his imagination. From the seeds of fascism grew dissent and inspired him to write the most powerful prose of the twentieth century.

Both Animal Farm and Nineteen Eighty-Four received great literary acclaim. Orwell would not be around to bask in his new found fame. Orwell died in 1950 after suffering years of ill health.

It was writing Nineteen Eighty-Four that killed Orwell. Suffering from tuberculosis and advised to rest George soldiered on and continued writing. Orwell removed himself from the sapping literary circles of London to the wind swept Scottish island of Jura in the Inner Hebrides. He finished his great creation here but never fully recovered.

It was a high price paid by Orwell, but he died in the knowledge of his message making an impact that continues to reverberate around the world to this day.

Sometimes adversity inspires some of the greatest one liners so this is my compilation of thirty of the best George Orwell quotes.

The novelist Wilfrid Sheed had a wonderful summary: "What he feared most was the blind spot between us and the future, the space between identities where we could get lost forever"

The Aussie author and poet Clive James summed him up thus: "The word ‘Orwellian’ is a daunting example of the fate that a distinguished writer can suffer at the hands of journalists ... He had a global grasp, and he was able to guess the truth by the way the other side told lies"

The novelist Aldous Huxley wrote a letter to Orwell which contained the following opinion: "The philosophy of the ruling minority in Nineteen Eighty-Four is a sadism which has been carried to its logical conclusion by going beyond sex and denying it. Whether in actual fact the policy of the boot-on-the-face can go on indefinitely seems doubtful. My own belief is that the ruling oligarchy will find less arduous and wasteful ways of governing and of satisfying its lust for power, and these ways will resemble those which I described in Brave New World."

The author Thomas Pynchon felt the pulse of his literary influence: "In Burma and Paris and London and on the road to Wigan pier, and in Spain, being shot at, and eventually wounded, by fascists - he had invested blood, pain and hard labour to earn his anger, and was as attached to it as any capitalist to his capital"

The Canadian writer George Woodcock offered this assessment: "His was the isolation of every man who seeks the truth diligently, no matter how unpleasant its implications may be to others or even to himself"

The author Anthony Burgess described his novel Nineteen Eighty-Four as: "An apocalyptical codex of our worst fears"

Its publisher Frederick Warburg, went further by describing Nineteen Eighty-Four thus: "This is amongst the most terrifying books I have ever read"

The novelist John Dos Passos commented: "I read it with such cold shivers I haven’t had since as a child I read Swift about the Yahoos"

The historian Jonathan Beecher gave this assessment: "Orwell believed clear thinking is both possible and important, and that clear writing fosters it. His design was to foster both" 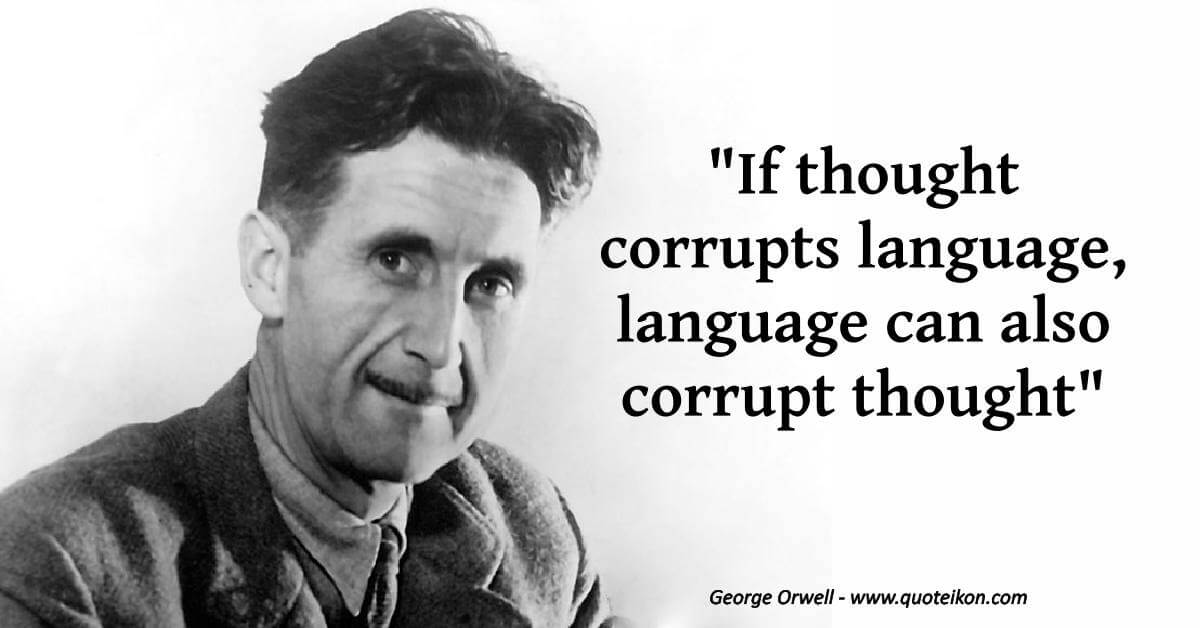