Peter Carl Fabergé was borne to an eminent family of jewellers where he inherited the knowledge of generations of gemologists and had the good fortune to be trained at some of the finest goldsmiths in England, France and Germany.

This combined knowledge was to be the foundation of the finest jewellery empire that would satisfy the world's aristocracy and their consorts for nearly half a century.

After Carl took over the House Of Fabergé they quickly impressed the House Of Romanov and became the Russian court jeweller to Tsar Alexander III and his successor Tsar Nicholas II where they served by creating Imperial Easter eggs and objets d’art from 1885 until 1917.

The Fabergé eggs were so impressive they became a royal family tradition at The House Of Romanov where two eggs were usually commissioned each year. A total of fifty Imperial eggs were created for the Tsars who were the envy of the other royal houses of Europe who went on to engage Faberge for their own commissioned works. The British royal family and the banking family of the Rothchilds became important patrons of Carl Fabergé as did royalty from the House Of Habsburg.

From the Faberge shop in London the financier Sir Ernest Cassel purchased a dozen silver bowls portraying the British Royal Navy which were then gifted to the First Lord Of The Admiralty Winston Churchill. In 1917 comrades Lenin, Trotsky and Stalin saw the Russian revolution bring the curtain down on the opulence of the House Of Fabergé as the bourgeois elite got swept away with the advent of Communism.

The name will live on forever as a mark of the finest attention to detail delivering the some of the most beautiful jewellery of the modern era, he was good for a one liner also so this is my compilation of 8 of the best quotes by Peter Carl Fabergé

Henry Bainbridge the London manager of Faberge's shop on the corner of Dover Street and Piccadilly described a typical day at the office: "It was here, quite unknown to the passing crowds in Piccadilly, that Kings put aside their crowns, that ambassadors, maharajas and magnates of all kinds, gay lords, grave lords, law-lords, and the lords of the daily press ... cast off their chains of office and ... spent a cool and refreshing half hour"

Henry Bainbridge went on to say: "Taking him all in all, Fabergé came as near to a complete understanding of human nature as it is possible for a man to come, with one word only inscribed on his banner, and that word – tolerance. There is no doubt whatsoever that this consideration for the worth of others was the foundation for his success"

The art critic Sacheverell Sitwell touched on its history: "When you touch or hold a Fabergé object, you are in contact with something, coming down to you, not only from the era of the Tsars, but an ancestry far more ancient.... It is Russian, and could be nothing else"

Lady Victoria Sackville talked of Edwardian aristocracy and celebrity: "You meet just everyone at Faberge"

The manager of Faberge's workshops Franz Birbaum observed that the orders from England possessed: "greater simplicity of form and more restrained ornamentation, with special attention being paid to the technical finish"

The British politician Lord Frederic Hamilton made this observation of the Fabergé attention to detail: "A stone must be very perfect to satisfy the critical Russian eye, and, true to their Oriental blood, the ladies preferred unfaceted rubies, sapphires and emeralds"

Queen Mary, the wife of Englands King George V was impressed to say: "There is one thing about all Fabergé pieces, they are all so satisfying" 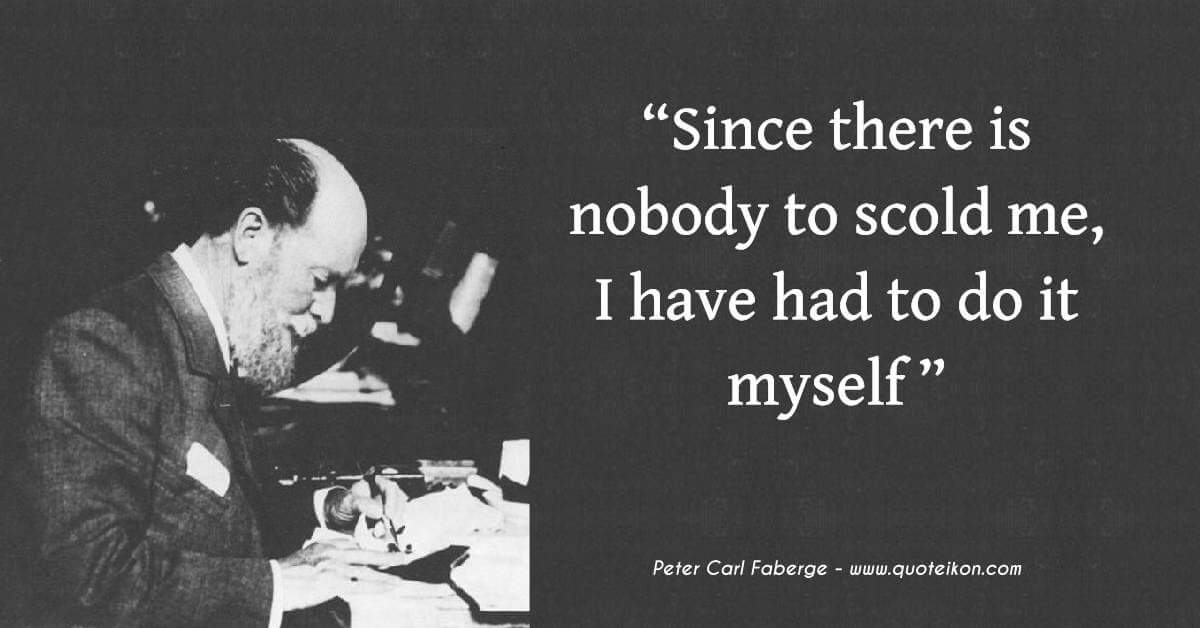