Nicholas II was the heir to a centuries old dynasty of Russian imperialism under The House Of Romanov that dated back to 1613. The Russian empire at its peak was the third largest empire in the history of the world covering 15% of the land mass of the earth.

Only the British and Mongol empires controlled a larger area by land mass and both colonial powers knew the intricate complexities of administering such an imperium. His father Alexander III thought time was on his side and had not got around to preparing Nicholas for the role of emperor and gave little training or encouragement for him to learn the role of being a Tsar.

Then after suffering an unforeseen illness that resulted in the early demise of Alexander III his son Nicholas II was thrust into power and given the autocratic reins of Tsardom. He inherited an empire that was in turmoil and he was ill prepared to handle such a situation and it was a situation that was compounded by so many government officials giving him differing advice that he never fully grasped the many affairs of state he was confronted with.

Nicholas' indecisiveness further fuelled his unpopularity with the people and he often erred on the side of brute force to many situations where diplomacy should have been his tool of choice to quell discontent. The level of disconnect between the Tsar and the people was a chasm he could not comprehend as he believed as Tsar he had a god given right to rule the people.

A disastrous war against the Japanese ended in humiliation and slowly his domain of influence was reducing until his actions during WW1 finally sealed his fate with a people that had suffered so much at the hands of his mismanagement. The Russian Revolution of 1917 saw the end of the Romanov dynasty and although he initially abdicated he short sightedly believed he would not be killed.

If there was one surviving member of the royal Romanov's they would be a threat to the revolution so the Bolsheviks determined they had no choice and his whole family were slaughtered in a dimly lit cellar in a house in Yekaterinburg in July 1918. It was one of the most shocking events of the 20th century.

The reign of Nicholas II maybe noted for all the wrong historical reasons but essentially he was a good and well meaning man that was hopelessly out of his depth. His questionable Tsarist wisdom aside he was actually good for a one liner so this is my compilation of 15 of the best Nicholas II quotes

Bolshevik War Commissar Filipp Goloshchyokin giving a dire warning that the Tsar would be killed if any attempt is made to free him and the royal family said: "All those under arrest will be held as hostages, and the slightest attempt at counter-revolutionary action in the town will result in the summary execution of the hostages"

The chief executioner Yakov Yurovsky read this out to the startled Tsar moments before carrying out the order: "Nikolai Alexandrovich, in view of the fact that your relatives are continuing their attack on Soviet Russia, the Ural Executive Committee has decided to execute you"

The Bolshevik leader Vladimir Lenin said of the executions: "Revolutions are meaningless without firing squads"

Russian prime minister Sergei Witte was at his wits end when he was quoted as saying: "His character is the source of all our misfortunes. His outstanding weakness is a lack of willpower"

Leon Trotsky on the fall of the house of the Tsar Nicholas II: "The dynasty fell by shaking, like rotten fruit, before the revolution even had time to approach its first problems" 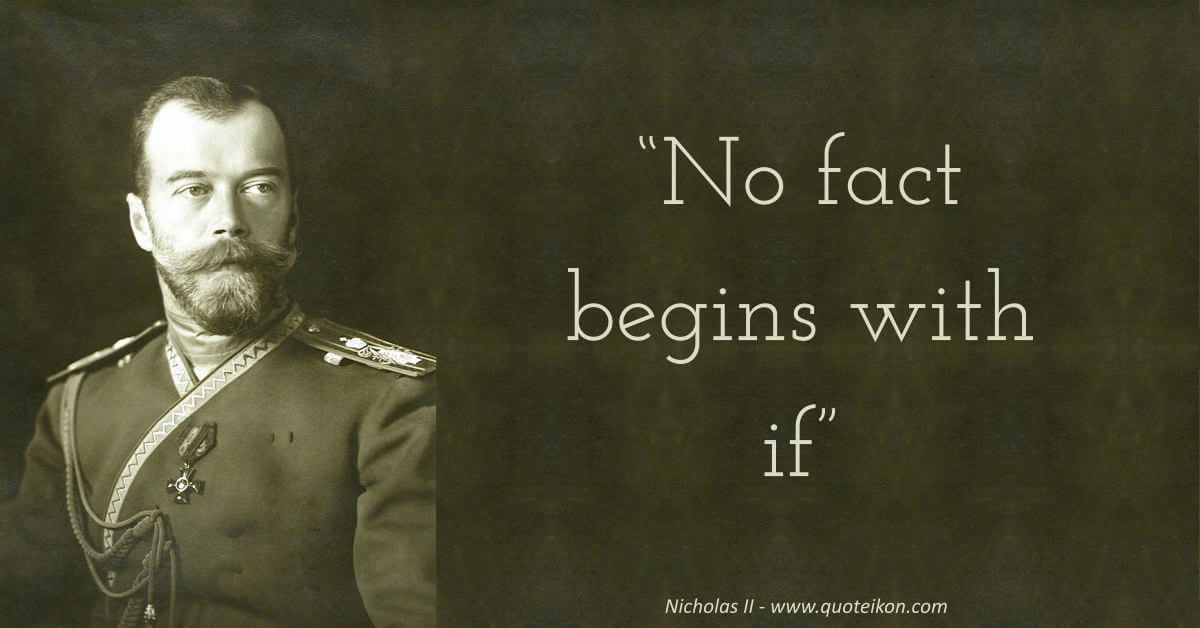