For half a century Louis Armstrong was the guiding light of innovative jazz whose transcendent genius as a creative musician has gifted the world a timeless catalogue of song, solo's and scat that has elevated his status to one of the most influential talents in the history of modern music.

From his humble upbringing Armstrong was brought up in and survived some of the meaner streets of New Orleans after the turn of the twentieth century. At the age of 11 the exuberant Louis fired a blank pistol in the air whilst celebrating New Years Eve in 1912 only to find himself on the wrong side of the justice system which sentenced him to the Colored Waif's Home where he spent the next two and a half years. Conditions were rough during his detention but it was a blessing in disguise as they taught him to play brass instruments in the band and by the time he left Louis was an accomplished cornet player.

Upon leaving the Colored Waif's Home Armstrong further honed his skills in New Orleans brass bands and joined a band playing on the riverboat steamers of the Mississippi River where he learned to read music. His riverboat experience afforded Armstrong the opportunity to develop his own style as he became one of the first jazz musicians playing intensive trumpet solos.

By 1922 Armstrong had moved to Chicago and was playing with one of the best Creole Jazz Band in the city at the behest of bandleader King Oliver and by 1923 they entered the studio together to cut their first recording, but by 1924 Louis decided to leave to broaden his musical horizons by going to New York and playing in orchestras as well as going into the recording studios with a number of different acts.

In 1925 he was back to Chicago where he formed his own band called Louis Armstrong and his Hot Five and they made a beeline for the studio where his creative juices saw an output of 24 recordings within a 12 month period. By 1928 Armstrong's star was rising, the "Hot Five" became the "Hot Seven" and they were making their musical mark on the world with hits such as "Potato Head Blues" (1927) and "West End Blues" (1928) where he sang and was backed by the pianist Earl Hines.

The 1930's came and Armstrong kept going whilst many fell away during the depth of the depression, he moved to Los Angeles and played the New Cotton Club to the well heeled of Hollywood whereby he inspired the likes of Bing Crosby to adopt his crooning style and he appeared in a number of movies on the silver screen including the Crosby hit "Pennies from Heaven" (1937).

From the 1940's onwards Armstrong hit the road in a gruelling schedule that saw him play to packed houses across the globe for the next three decades. He became an American ambassador of music as his status grew to an that of an all American cultural icon who was accepted across the racial divide of a country deep in a civil rights crisis.

It wasn't just his virtuoso trumpet performances that made Louis Armstrong the most inspirational jazz performer of the twentieth century as his distinctive gravelly voice and indomitable stage presence made him one of the most charismatic figures through the evolution of jazz. He was a skillful improviser whose presence left an indelible mark on some of the greatest performers of the century with the likes of Dizzy Gillespie, Ella Fitzgerald, Frank Sinatra, Duke Ellington and Miles Davis all touched by the genius of good old Pops from New Orleans.

He had a gentle character with a very positive outlook on life no matter what hardships were faced, his beaming smile spoke many kind words both on and off stage that have helped me to compile this list of 28 of the best Louis Armstrong quotes.

Bing Crosby was impressed to say: "He was the only musician who ever lived, who can't be replaced by someone"

President Richard Nixon shared this tribute: "Mrs. Nixon and I share the sorrow of millions of Americans at the death of Louis Armstrong. One of the architects of an American art form, a free and individual spirit, and an artist of worldwide fame, his great talents and magnificent spirit added richness and pleasure to all our lives"

The actress Tallulah Bankhead rated him highly: "Louis is charged with a divine kind of electric energy which enables him to reach the hearts of his listeners with his music. He has that elusive quality of being able to touch people of every land and color, to move audiences from Tokyo to Topeka with astonishing ease. I have always believed that Louis was himself touched by three fairies when he was born, and these three fairies endowed him with his music, his humor and his utterly unique voice"

Miles Davis made this comparison: "You know you can't play anything on a horn that Louis hasn't played - I mean even modern. … I love his approach to the trumpet; he never sounds bad. He plays on the beat and you can't miss when you play on the beat - with feeling. That's another phrase for swing"

The composer Duke Ellington summed him up thus: "He was born poor, died rich, and never hurt anyone along the way"

Duke Ellington was also praiseful with these words: "If anybody was Mr. Jazz it was Louis. Armstrong. He was the epitome of jazz and always will be. He is what I call an American standard, an American original"

The oboist Mitch Miller shared this observation: "I knew Louis well, he had his crazy little habits. Everyone thinks he was a druggie, but he wasn't. After every concert, he would put on a stocking cap, then he'd have his bottle of Pluto water, orange juice, Serutan and a joint. This was his formula; in fact, he used to post the recipe on bulletin boards, calling it 'The Road to Good Health'."

The jazz critic Leonard Feather shared this assessment: "His style, melodically and harmonically simple by the standards of later jazz trends, achieved in his early records an unprecedented warmth and beauty. His singing, lacking most of the traditional vocal qualities accepted outside the jazz world, had a rhythmic intensity and guttural charm that induced literally thousands vof other vocalists to imitate him, just as countless trumpeters through the years reflected the impact of his style"

The author William S. Burroughs shared this anecdote: "When you're sick, music is a great help. Once in Texas, I kicked a [heroin] habit on weed, a pint of paregoric, and a few Louis Armstrong records"

The pianist Joe Bushkin was moved to say: "When Louis comes on, man, it's like the atomic bomb arriving--for PEACE!" What else can anyone say?" 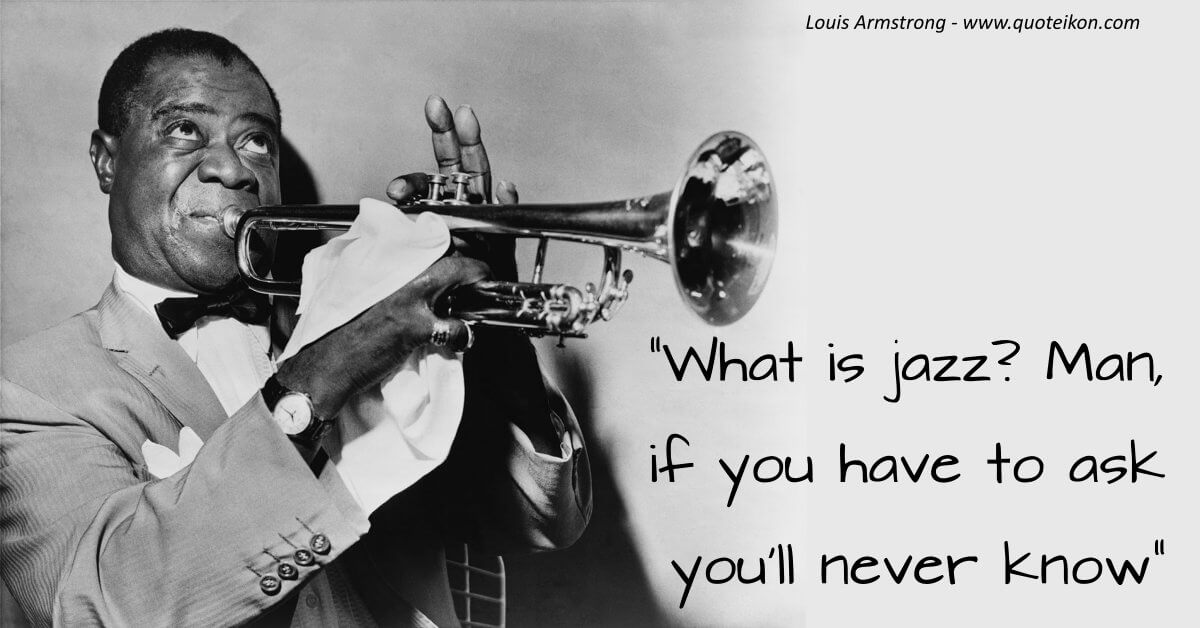