The world had been waiting a long long time to create the mold of Tallulah Bankhead and unfortunately in this planets haste for an individualistic feminine breath of fresh air they cast her mold before her time only to break it in a fit of tabloid and movie studio hypocrisy.

As a young wannabee actress attempting to make the leap from minor acting into the big time she suffered the trials and tribulations that many young actors face while auditioning for movie roles and contrary to popular opinion about her character she even refused an invitation to the casting couch for a part offered in the 1920 movie Dr. Jekyll and Mr. Hyde.

Tallulah decided to try her luck on the theatre circuit of the west end of London and this was where she honed her natural acting abilities. She found massive success as her true actress pedigree was coming to the fore and by 1924 she was starring in a west end show called 'They Knew What They Wanted' which went on to become a Pulitzer prize winning production.

Bankhead crossed back to the other side of the pond and was soon receiving critical acclaim for her Broadway roles which led her to being cast as the favourite to win the coveted role of Scarlett O'Hara in Gone With The Wind, alas she lost out to Vivien Leigh who being so much younger could pass as the 16 year old Scarlett.

Her acting ability was never in doubt and she continued to impress as the best actress that director after director had ever witnessed in auditions but she still did not manage to get those coveted roles through the 1940's and 1950's which should have been her prime.

She won critical acclaim in the 1939 movie 'The Little Foxes' and in Alfred Hitchcocks 'Lifeboat' in 1944. However her open lifestyle which was deemed controversial in those days was drawing the kind of headlines that the tabloids had by then brainwashed the public into adoring but producers hated was gaining her plaudits by the millions but the monied circles of Hollywood looked on disparagingly.

Time after time directors were wowed by her auditions only to see studio heads like Jack Warner not allow her the starring role because of lifestyle excuses. The 1950's saw greater scrutiny from the press so that meant greater interest from the public but perversely meant greater disdain from heads of studios.

In her era the world was not ready to accept an openly and honest individual lady on her own terms, but if the truth be known she had more talent and more balls than the Hollywood money-men could dare to recognise. Yes, she was loud and proud, she was a true character who wanted to live life as she wanted and not to try to fit into the contained canned beauty what her era's society expected of a famous talented female of that generation.

I love researching the greatest characters with backbone and Tallulah was one of life's great individuals, so this is my list of the 15 best Tallulah Bankhead quotes.

The legendary director Alfred Hitchcock made this observation: "The whole point about Tallulah was that she had no inhibitions. Now some people can take this, others can't"

The actor Vincent Price talked of her star quality: "She was magnificent. There ain't nobody like her. In her heyday nobody had a bigger ball. She had that magnificent beauty that is ugly in a funny way. Judith Anderson and Laurette Taylor had it too. They came off being the most beautiful women in the world through an illumination of their own personality. I've seen Tallulah look absolutely dreadful, then take a shot of ammonia and Coca-Cola and turn into a beauty"

The playwright Tennessee Williams was impressed to say: "I suppose I simply mean that she saw or sensed immediately that I was meeting, for the first time in my life, a great star, and that I was more than just properly awed. I was virtually dumb-struck"

Bette Davis recognised her talent: "On The Little Foxes I begged the producer, Samuel Goldwyn, to let Tallulah Bankhead play Regina because Tallulah was magnificent on the stage. He wouldn't let her" 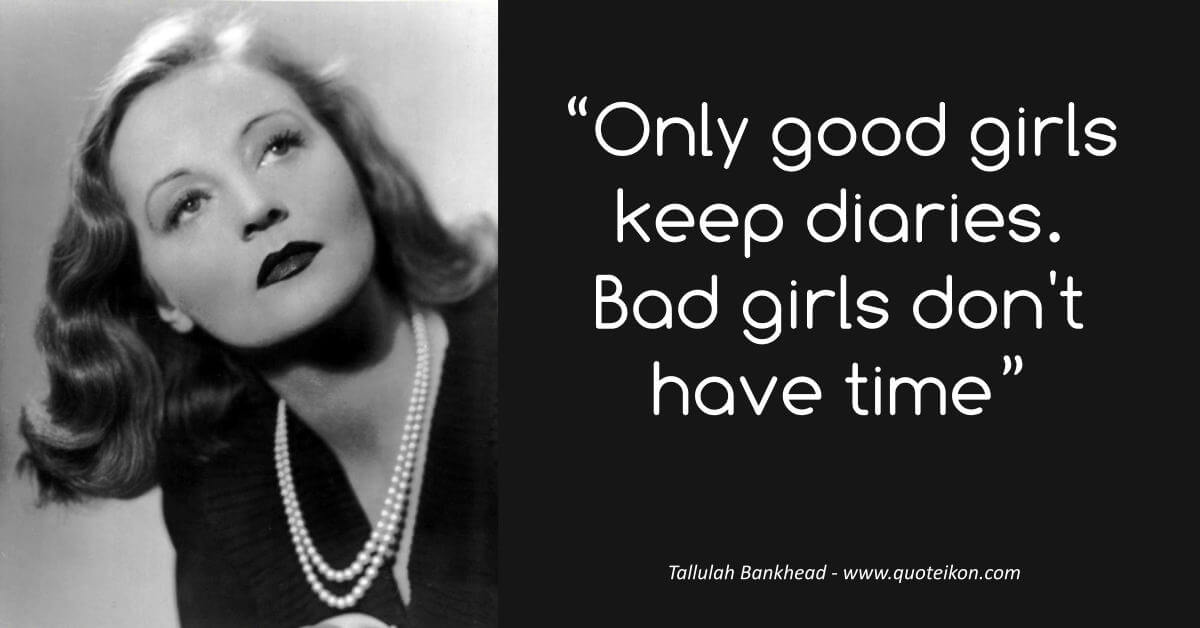