It was a tiny island beneath the Malaysian peninsular with no natural resources when it unexpectedly gained its independence in 1965, and as the political elites around the world raised their eyebrows in a dismissive shrug of disdain towards another no hope new nation the newly elected Singaporean leader Lee Kuan Yew had other ideas and he was about to do the unthinkable and turn a sleepy port city into a thriving economic metropolis.

Breaking colonial bonds is one thing, making a success of your new found liberty is the real test to determine whether you were just a successful independence fighter or have the makings of a statesman on the world stage. A quick look at post colonial African states with a wealth of natural resources is testament enough to illustrate that if a country is not governed correctly it will fail. Lee Kuan Yew knew what a colossal task he faced and he realised he had to lead with a ruthless pragmatism and his unshakeable belief in his policies had to reverberate across the populace.

Lee Kuan Yew had lived under the colonial yoke of the United Kingdom and he witnessed first hand their embarrassing eight day capitulation to Japanese forces in February 1942, he also felt the hand of Japanese cruelty and was one of the fortunate ones to survive their brutal occupation. These experiences taught Lee some valuable lessons and instilled into his mind the unwavering ambition for self determination for Singapore, preferably as a part of what was then called Malaya.

Prior to his entry into politics Lee was a successful lawyer who won a landmark sedition case against a student group in 1954. In the same year he founded the PAP (Peoples Action Party) and in 1955 he won the Tanjong Pagar seat. In the 1959 election the PAP won in Singapore by a landslide by gaining 43 of the 51 seats in the legislative assembly, although he was made Prime Minister he did not have full autonomy to rule as defence and foreign affairs were still controlled by the British.

The path to full independence was on the agenda but the British realised it would be difficult for Singapore to go it alone so in 1963 Malaysia was formed with the merger of the Federation of Malaya with the former British colonies of Sabah, Sarawak and Singapore. This was not an easy alliance as the ideological and political differences soon began to emerge and the rise in tensions led to manipulation and riots on the streets of Singapore.

Lee Kuan Yew wanted a Malaysian Malaysia where everyone was equal regardless of race, there were also economic differences that were driving a wedge between the politico's of Singapore and Kuala Lumpur. The issues came to a conclusion 1965 when the parliament voted to expel Singapore from Malaysia and despite last minute appeals from Lee and the PAP hierarchy to stay part of the union Singapore became an independent state. A distraught Lee Kuan Yew was quoted as saying: "For me it is a moment of anguish because all my life ... you see the whole of my adult life ... I have believed in merger and the unity of these two territories. You know it's a people connected by geography, economics, and ties of kinship".

At the very dawn of the new Republic Of Singapore, just when everyone who knew him expected Lee Kuan Yew to take the bull by the horns he withdrew into isolation to collect his thoughts, Lee was unreachable for six weeks and the Singaporean parliament was suspended awaiting his return. Lee carried a heavy burden, but it was one he determined would be successful despite facing what must have seemed at the time insurmountable odds.

By the end of 1965 his vision for Singapore was fully framed in his mind, he set out to seek investment outside of SE Asia and he realised he would have to consider unorthodox methods to achieve economic success, as Lee was quoted as saying: "We had to create a new kind of economy, try new methods and schemes never tried before anywhere else in the world because there was no other country like Singapore". Enticed by the incentives of low wage workers with minimum union rights the multi-nationals came and set up hi-tech manufacturing facilities, foreign banks opened offices and flourished in what was a commerce first economy and very soon Singapore became an international financial centre of high repute.

Lee introduced economic policies that were pro-business and domestic policies that were created to enhance Singaporean society, under his leadership Singapore would achieve a ranking of best education system in the world. When the British decided to close their naval base that employed 50,000 people Lee Kuan Yew turned this to his advantage by turning it into a successful state-owned shipbuilding and repair company. Lee's drive for economic success turned Singapore into the leading maritime capital of the world with its port becoming one of the world's busiest for container throughput.

In 1967 Singapore introduced its own currency which was on par with the Malaysian Ringgit and after 50 years of economic success under Lee the Singaporean dollar was valued three times higher than the Ringgit despite all the natural resources at Malaysia's disposal including water which Singapore relies on its close neighbour to supply.

The Lee Kuan Yew style of leadership was authoritarian, he ruled with a rod of iron and anyone who tried to get in his way was crushed by his determined vision to reach what he set out to achieve. He was not interested in being liked although he was a masterful orator who relentlessly inspired a nation with his incisive mind that was touched by the genius of astute political sensibility. Lee Kuan Yew had a saying: "I always tried to be correct, not politically correct", that was a perfect fit for the multicultural society he created.

Singapore is a shining example to the world and its success is solely due to the strong leadership of Lee Kuan Yew who had that rare commodity of high intellect being channelled through an ethical compass of equally high integrity. Singapore was too small a stage for a man of Lee's talents, admired around the world he shared advice to Presidents and Prime Ministers alike, if he were to live again in a parallel universe it would be interesting to see what he would have created for Malaysia if the ideological differences were ignored and he was given free reign to govern Malaysia including Singapore for the same 25 years he ruled in his small island state, they would probably be a global super power by now.

He was more than just the sage of Singapore he was its heartbeat, his speeches were epic with carefully chosen words but when he spoke it carried great meaning and conveyed his message in clear and concise terms. Some of his quips were memorable such as during a 1969 speech on the abortion bill when he said: "Every person, genius or moron, has a right to reproduce himself", his prodigious turn of phrase was legend and it has helped me to compile this list of 33 of the best Lee Kuan Yew quotes.

The U.S. diplomat Henry Kissinger shared this observation: "His vision, was of a state that would not simply survive, but prevail by excelling. Superior intelligence, discipline, and ingenuity would substitute for resources"

Henry Kissinger was impressed to say: "He has become a seminal figure for all of us. I've not learned as much from anybody as I have from Mr Lee Kuan Yew. He made himself an indispensable friend of the United States, not primarily by the power he represented but by the quality of his thinking"

His political rival in Malaysia, Tun Dr Mahathir Mohamad shared this reflection: "We crossed swords many time during the debates. But there was no enmity, only differences in our views of what was good for the newborn nation. He included me among the ultra Malays who was responsible for the racial riots in Singapore. Actually I never went to Singapore to stir up trouble. Somebody else whom I would not name did"

The New York Times columnist Nicholas Kristof gave this glowing assessment: "Other leaders have reshaped nations—Kemal Ataturk in Turkey, Lenin in Russia, Deng Xiaoping in China—but no one left a deeper imprint on his people than Lee… One can disagree with him, but intolerance and authoritarianism have never had so articulate or stimulating a spokesman"

The Washington Post columnist David Ignatius saw him as a shrewd political operator: "He is probably the smartest politician I have interviewed in more than 25 years as a journalist"

The 41st president of the United States, George H.W. Bush rated him highly: "In my long life in public service, I have encountered many bright, able people. None is more impressive than Lee Kuan Yew"

The former Vice President of the United States Joe Biden talked of his sage status: "On the way back from Mumbai to go meet with President Xi in China, I stopped in Singapore to meet with a guy named Lee Kuan Yew, who most foreign policy experts around the world say is the wisest man in the Orient"

The former President of France Jacques Chirac understood his achievements: "Lee Kuan Yew has gathered around himself the most brilliant minds, transforming the most exacting standards into a system of government. Under his leadership, the primacy of the general interest, the cult of education, work and saving, the capacity to foresee the needs of the city have enabled Singapore to take what I call ‘shortcuts to progress'."

The former prime minister of the United Kingdom, Margaret Thatcher studied him: "In office, I read and analyzed every speech of Lee’s. He had a way of penetrating the fog of propaganda and expressing with unique clarity the issues of our times and the way to tackle them. He was never wrong"

Another former prime minister of the United Kingdom, Tony Blair was forthright: "Lee is the smartest leader I think I ever met"

The former chancellor of Germany, Helmut Schmidt thought highly of him: "Ever since I met my friend Lee Kuan Yew, I was highly impressed by his brilliant intellect and his straight overview. His lifetime achievements as a political leader and statesman are outstanding"

The newspaper magnate Rupert Murdoch spoke of his achievements: "More than 40 years ago, Lee Kuan Yew transformed what was a poor, decrepit colony into a shining, rich, and modern metropolis—all the time surrounded by hostile powers. With his brilliant, incisive intellect, he is one of the world’s most outspoken and respected statesmen"

The former President of the World Bank, James Wolfensohn admitted he was schooled by Lee: "Thank you very much, Mr. Minister Mentor, for all the things you have taught me. I tried giving you my advice. But, in fact, it was you who taught me"

The American businessman Charlie Munger gave this assessment: "It’s no accident that Singapore has a much better record, given where it started, than the United States. There, power was concentrated in one enormously talented person, Lee Kuan Yew, who was the Warren Buffett of Singapore"

The Singaporean politician Tony Tan summed up his past whilst looking to the future: "I think we have a good foundation which Mr. Lee Kuan Yew laid down, but you have to move forward" 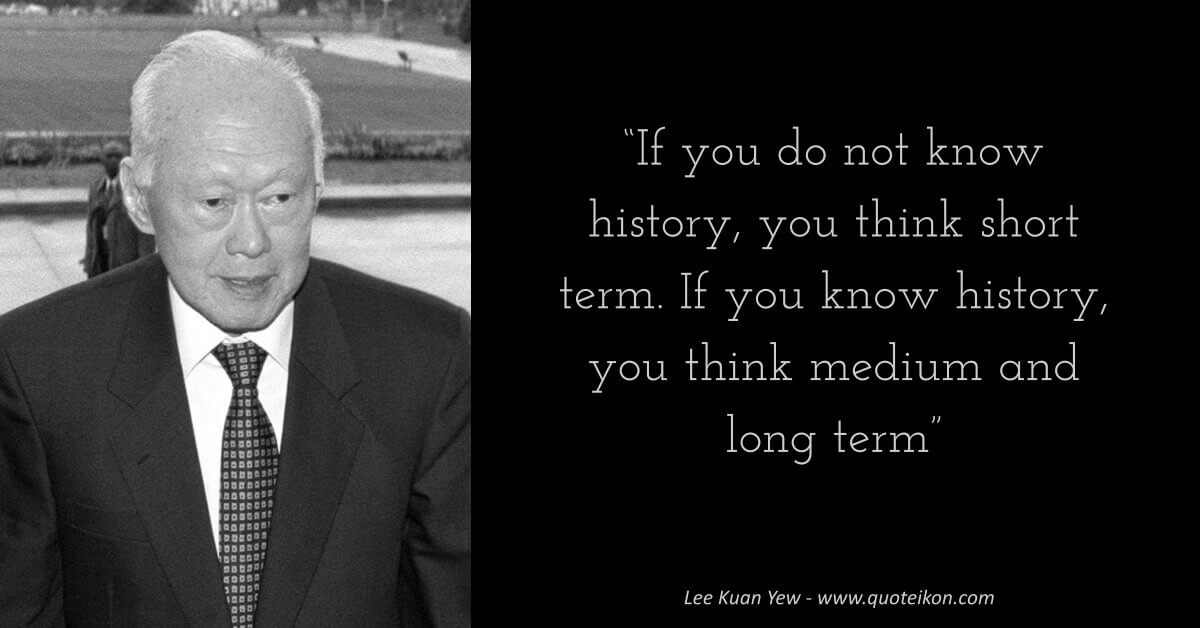