Since its Merdeka in 1957 Malaysia has been ruled by seven Prime Ministers but none of them achieved the economic growth achieved under the governance of Tun Dr Mahathir Mohamad who was in the hot seat of power from 1981 until 2003 when he officially retired but later made a remarkable comeback to again lead the country from 2018 up until the present date.

Mahathir first started making political waves in the 1960's, he was elected to parliament in 1964 representing the Alor Setar seat of Kota Setar Selatan. The topic dominating political discussion of that era was the future of Singapore and Mahathir wasted no time weighing into the argument with his Malay nationalistic speeches where he called the Singapore based party PAP "pro Chinese", "anti Malay" and labelled its leader Lee Kuan Yew as "arrogant", in return Lee called Mahathir an "ultra Malay". By 1965 this argument had climaxed with the expulsion of Singapore from the union of Malaysia, but the Alor Setar MP continued his Malay nationalistic rhetoric that cost him his seat in the 1969 election.

Before the election Mahathir warned of simmering tensions in the Malay community would lead to violence and after the UMNO controlled government lost many seats in the 1969 election Kuala Lumpur exploded with riots on the streets resulting in the loss of 100's of lives. Mahathir wrote a letter to Prime Minister Tunku Abdul Rahman calling for his resignation for failing to protect Malay rights, the letter was leaked to the press and Mahathir was forced out of UMNO.

In 1970 Mahathir penned the now famous book "The Malay Dilemma" which outlined the reasons that led to the 1969 riots and explained both the problems and the failings of the Malays and proposed many solutions that when combined would lead Malaysia down a more harmonious path where the economic strength of the nation would not be dominated by one race, the Chinese. The book raised Mahathir's political profile and by 1972 he was back in the UMNO fold, by 1974 he was in the cabinet as Minister For Education and by 1981 he was the Prime Minister.

His tenure as Prime Minister was the longest in Malaysian history but it also gave the country the political stability required to build the nation. Mahathir got to work quickly by encouraging foreign investment, reducing trade tariffs, reforming financial and tax regulations and determining to build an abundance of necessary infrastructure projects.

The north-south highway connecting the Thai border to the Johor bridge and gateway to Singapore was first planned in 1977 and then shelved, Mahathir wasted no time in reviving and actually starting this project in his first year in office that saw the expressway fully open in 1994.

The Penang Bridge was another project Mahathir revived, initially it was the brainchild of the 2nd Prime Minister of Malaysia Tun Abdul Razak and the 2nd Chief Minister of Penang Tun Dr Lim Chong Eu, its construction was only started under Mahathir's watch and for its 1985 opening he triumphantly drove the national car, a red Proton Saga adorned with a Malaysian flag across the bridge.

Mahathir was responsible for the creation of KLIA (Kuala Lumpur International Airport) in Sepang which opened in June 1998 just in time for the Commonwealth games that Malaysia was hosting, and the new airport now carries approximately 60 million passengers annually. Also in Sepang, Mahathir was the instigator behind the construction of the Sepang International Circuit which opened in 1999 and hosted its first race, the Moto GP Malaysian Grand Prix on 20th April 1999.

Tun Dr Mahathir Mohamad was the chief driver behind The Multimedia Super Corridor which entailed relocating the government out of Kuala Lumpur and into a newly built city called Putrajaya. The project was huge and included a silicon valley inspired city called Cyberjaya to be built as a neighbour to Putrajaya with both these gleaming new cities on the road south of Kuala Lumpur leading directly to the newly built airport KLIA.

Mahathir created the Malaysian automobile industry with the foundation of the national car maker Proton in 1983, Proton was fully owned by the government virtually securing its domestic success and providing much need jobs for the ambitious government under his guidance.

There were many other large scale projects under his tenure including the building of the National Stadium at Bukit Jalil, The Bakun Dam, the Port of Tanjung Pelepas and transforming the tropical island of Langkawi into a world class tourist resort that attracts in excess of 3 million visitors annually.

Of all his mega projects it is the Petronas Twin Towers that is the jewel in the crown. This magnificent building was officially the tallest building in the world between 1997 until 2004 and still remains as the tallest twin towers in the world. The building is architecturally stunning and the major tourist attraction of Kuala Lumpur, it was officially opened by Tun Dr. Mahathir Mohamad on 1st August 1999.

His prime ministership was not without its critics and the phrase "Mahathirism" was first coined to describe his political manoeuvering's to maintain his power using race based policies.

After his retirement he became an elder statesman sharing sage like advice on a variety of subjects and he wrote his memoirs. However the 1MDB scandal was unravelling and Mahathir resigned from his position within UMNO and in 2016 he founded his own political vehicle called Parti Pribumi Bersatu Malaysia (PPBM). In a remarkable turn of events Mahathir became the prime ministerial candidate for the coalition of opposition party's called Pakatan Harapan. The Mahathir campaign was simple, get Najib out of Putrajaya and end put an end to government corruption and in the 2018 election the unthinkable happened and Tun Dr Mahathir Mohamad was elected as the seventh Malaysian Prime Minister, at the age of 92 he became the oldest leader in world politics.

As political comebacks go, the reelection of Tun Dr Mahathir Mohamad after a ministerial absence of 15 years was both spectacular and audacious in its sheer magnitude, Mahathir was back on the hustings and about to become the nemesis of his former protégé Najib Razak. He broke ties from his old party which was still in power and created another party which just waltzed through political campaigning to usurp what he deemed as a regime that was corrupt to the core. His political reinvention removed from power UMNO, the one party that had endured total power for the 61 years since the birth of Malaysia in 1957, his achievement was beyond unimaginable, it was the most significant political event since the dawn of the nation and the nonagenarian made it look as easy as a walk in park.

His tongue was as sharp as a knife and his witticisms captured the imagination and helped me to compile this list of 35 of the best Mahathir Mohamad quotes.

The Chinese leader Xi Jinping was optimistic about current and future relations with the Mahathir administration: "Our bilateral relations is at a new starting chapter. While China is making its stride towards its second century mark, your country is also striving towards a new Malaysia... both countries are working towards developing a bright future for China-Malaysia relations"

Singapore’s second prime minister Goh Chok Tong was impressed to say: "One must salute Dr Mahathir for his indomitable will and energy to right what he thinks is wrong with his country"

Before the 1MDB scandal Najib Razak was praiseful: "Much if not all of Malaysia's present success must be attributed to Dr Mahathir. He has turned Malaysia into an advanced developing country and there is much enthusiasm for the future"

The Malaysian politician Daim Zainuddin didn't witness the crossover between his professional and personal lives: "He has no close friends that I know of"

James Chin, the director of the Asia Institute gave this assessment: "He has mellowed, and unlike his first time in office, he has now realized that independent institutions are not a bad thing. Previously, he was all about centralization of power in the prime minister’s office"

The former Minister of Foreign Affairs Anifah Aman was pessimistic: "What concerns me right now is that with the actions of Dr Mahathir, who is a lauded statesman and a beloved international icon, the country could become unstable, driving away foreign investors from this nation at the same time... he should be more understanding of what democracy is, which cannot be achieved the way Dr Mahathir is going about it now"

The DAP leader Lim Guan Eng spoke of his second term in office: "I think it’s Mahathir version 2.0. I think it’s very different from the version 1.0 we saw when he first became prime minister. He’s more reformist. He’s a man with a mission, driven by the need to get things done in the shortest possible time. He’s moving at a frenetic pace." 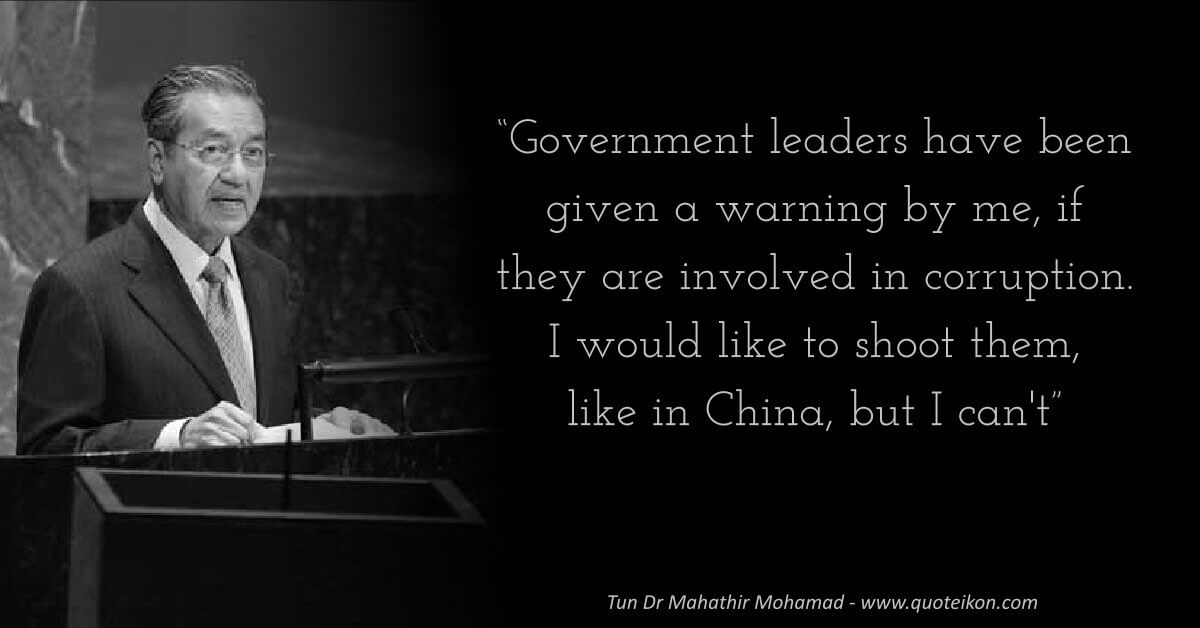