Laurence Olivier was the English thespian who won artistic immortality conquering both stage and screen with inspirational performances that see him internationally recognised as the greatest actor of the twentieth century.

Whether he played the valiant or the villain Olivier would always leave a piece of himself on stage for the audience to remember, from the downright nasty to the noble his performances were crafted in his own blood, sweat and fears as he pushed himself to the limits of both his artistic imagination and physical endurance.

The young Laurence learned his trade in theatre and after making a good impression he was cast in the Noel Coward play "Private Lives" (1930) which proved a good stepping stone for the ambitious thespian. Hollywood beckoned with a two film contract with RKO Pictures but his first foray into tinseltown turned into a damp squib so he headed back to London to immerse himself into some classical theatre roles including the highly successful run of Romeo And Juliet that was staged in 1935 by John Gielgud.

In 1936 he joined London's Old Vic company who specialised in Shakespearian plays and Olivier delved deep inside his dramatic soul to provide an energetic force behind the literary genius of the words of William Shakespeare. He stayed at the Old Vic until 1938 in a period that saw him gain a great experience of the classics but more importantly it stimulated his mind to perceive a plethora of inventive possibilities on how to play these characters in the future, especially on screen.

Determined to make his mark on celluloid Olivier was cast with his friend Ralph Richardson in a 1939 comedy called "Q Planes" that was re-titled as "Clouds Over Europe" for its American release, although it received some kind reviews it was essentially a propaganda film to swing American opinion towards the British and against the Germans.

His first real taste of on screen success was also in 1939 with the Hollywood release of "Wuthering Heights" which received high critical acclaim and was a box office success giving Olivier his first of many Academy Award nominations.

1940 proved to be another good year on the silver screen as Olivier starred in the Alfred Hitchcock thriller "Rebecca" and then in the film adaptation of Jane Austen's novel "Pride and Prejudice". His only disappointment was the leading lady not being Vivienne Leigh with whom he was having an extra marital affair, the studio thought it prudent to wait for both their divorces to be finalised and instead cast Joan Fontaine in the former and Greer Garson in the latter movie.

He spent much of the WW2 years making propaganda speeches and movies to support the war effort including working under the directorship of Alexander Korda at the behest of British Prime Minister Winston Churchill whereby Olivier starred with Vivien Leigh in "That Hamilton Woman", the film drew some not so subtle comparisons between Hitler and Napoleon in its 1941 release. As a whole these movies were effective in their key goals but they offered little in real cinematic quality apart from one: "Henry V" in 1944 which earned both the best movie and best actor Academy Award nominations but both failed to win the coveted Oscar.

He went further in 1948 when he did win an Academy Award for best actor for his role in another Shakespearian adaption for the screen: "Hamlet", this highly successful movie also saw him win an Oscar for Best Picture and although nominated for best director he failed to make it hat trick of Oscars for this movie.

When "Richard III" was released in 1955 it completed a trilogy of Shakespearian masterpieces adapted to the silver screen and cinema goers now fully appreciated what the theatre audiences already knew about Oliviers abilities to understand the Bard of Stratford's works and turn them into successful 20th century productions.

The 1957 movie "The Prince And The Showgirl" saw Olivier again take the roles of producer, director and leading man with the big screen adaptation of the play "The Sleeping Prince", this was a move away from classical themes as he cast Marilyn Monroe as the leading lady in a movie that aged him about 10 years due to the constant delays and retakes of his female co-star.

Ladies causing issues became a theme as off screen Olivier's marriage to Vivien Leigh was disintegrating due to her manic depression despite Laurence showing great understanding and compassion. They were to eventually divorce in 1961 with Leigh citing the reason as adultery, but in fairness both were guilty of this but Laurence did not commit to naming and shaming.

Although he never really left the stage the 1960's saw him in concentrating more on his love of live performance, he was also named as Britain's first artistic director of the National Theatre. In contrast the 1970's saw him swing back more to movie roles with some stellar performances in "Sleuth" (1972), "Marathon Man" (1976) and "The Boys from Brazil" (1978).

Throughout his career he brought a vitality to stage and screen where he played from the heart contributing an ingenious dynamism into his often Machiavellian characters whether they were heavenly, heinous or a your highness Olivier could invent an accent to suit the role. His flexibility traversed the comic, dramatic, tragic and classic as his determination to act was equally matched by the devotion to his art which was indeed insatiable.

Not only was he a prince of his profession he was also knighted in 1947 which gave him the title Sir Laurence, then in 1970 he was awarded a peerage which upgraded his title to Baron Olivier of Brighton in the County of Sussex. After his death in 1989 his ashes were interred in Poets' Corner in the South Transept of Westminster Abbey which is quite appropriate as its location is in front of Shakespeare's memorial, indeed I'm sure the Bard Of Stratford himself would have welcomed him with open arms eager to discuss with the actor and director synonymous with putting Shakespeare's work on the big screen through the Golden Age of Hollywood.

Citing lines from the classics apart, he was good for a one liner also so this is my compilation of 20 of the best Laurence Olivier quotes.

The author Michael Billington gave this assessment: "Olivier elevated the art of acting in the twentieth century ... principally by the overwhelming force of his example. Like Garrick, Kean, and Irving before him, he lent glamour and excitement to acting so that, in any theatre in the world, an Olivier night raised the level of expectation and sent spectators out into the darkness a little more aware of themselves and having experienced a transcendent touch of ecstasy. That, in the end, was the true measure of his greatness"

Noel Coward described him thus: "I cannot think of any other living actor who has used such quantities of spirit gum with such gleeful abandon. I believe that this rather excessive determination to be old before his time was the result of an integral shyness in his character"

Sir John Gielgud shared this observation: "He respected tradition in the theatre, but he also took great delight in breaking tradition, which is what made him so unique. He was gifted, brilliant, and one of the great controversial figures of our time in theatre, which is a virtue and not a vice at alL"

Sir John Gielgud later paid this compliment: "He doesn't act with the sort of caution and fear that some of the rest of us have"

Sir Alec Guinness was impressed to say: "Olivier has made me laugh more as an actor than anyone else"

Anthony Hopkins rated him highly: "He was the greatest actor of the century"

Former actor and President Ronald Reagan recognised his contribution: "Sir Laurence Olivier delighted millions with his unmatched excellence on the stage and screen. He was an actor of immense talent, precision and a deep and enduring dedication to his craft"

The actress Dorothy Tutin said sweetly: "As a man and an actor he was an inspiration. I loved him"

The actor Bernard Miles summed him up: "Such subtlety, such detail, biting deeper into the role than any actor of my time, or indeed any time"

The author William Redfield respected the man and his single mindedness: "He is still the definitive actor of the twentieth century. Why? Because he wanted to be. His achievements are due to dedication, scholarship, practice, determination and courage. He is the bravest actor of our time" 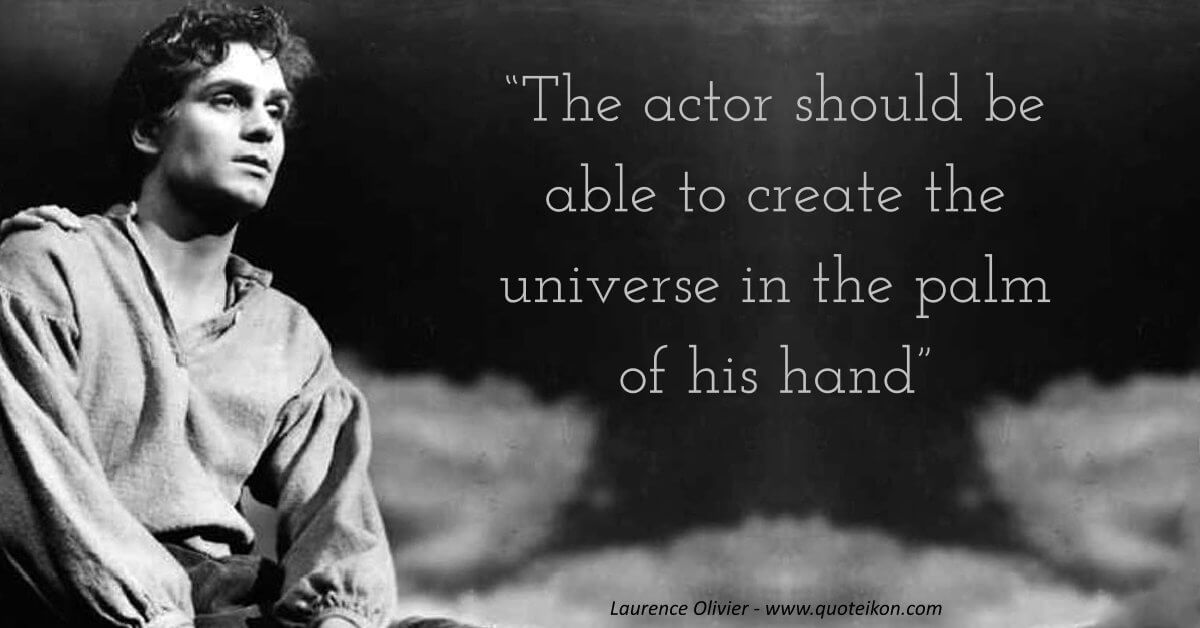