Lala Lajpat Rai was the Indian nationalist they called The Lion Of The Punjab who through his selfless acts and lead by example activism was a major contributor to the rising feeling of patriotism and resentment to staying silent under the yoke of British colonialism.

Lala Lajpat Rai grew up in a middle class family in the northern state of the Punjab, his father was a teacher and after excelling in his studies Lajpat Rai went into the legal profession where he established a successful practice first in Hisar and later in Lahore where he worked tirelessly in the lucrative high court but donated the most of his earnings to philanthropic causes.

Through his work he undertook a number of initiatives for the betterment of Indian society including setting up schools, hospitals and opening the minds of his fellow countrymen through his Indian nationalist publications. He was one of the founders of the Punjab National Bank and he established a trust in honour of his mother that saw the opening of the Gulabi Devi Chest Hospital that carried her name and specialised in the treatment of tuberculosis for women.

Lajpat Rai had a burning ambition for Indian self determination growing ever stronger in his heart, he took inspiration from Queen Rani of Jhansi and was deeply influenced after reading about the Italian struggle for independence fought by Giuseppe Mazzini and Giuseppe Garibaldi. He felt that the Indian National Congress (INC) was too passive in their approach to gaining liberty from the British and began advocating a more vociferous vocal campaign against colonialism.

Lajpat Rai joined the Indian National Congress in 1888 and together with fellow nationalists Bal Gangadhar Tilak and Bipin Chandra Pal started the Swadeshi Movement that was aimed at increasing nationalistic spirit with an aim for independence. In 1905 the British Raj, through the Viceroy of India, Lord Curzon, introduced the partition of Bengal separating east and west following geographical religious beliefs of either Hindu or Muslim. This was a divide and rule policy to stir agitation, which it did and resulted in riots and gave fresh impetus to the Swadeshi Movement as nationalistic fervour increased. The partition was the catalyst for the eventual separation of the Indian sub-continent by religious lines as in 1906 the Muslim League was formed and once the long fuse of politicisation of religion was lit it could never be extinguished.

In 1907 Lala Lajpat Rai was behind the Punjab unrest which was a protest against the 1906 colonisation bill, the first protest was at Chenab Colony and the second was at Lyallpur, although these were mainly peaceful protests the seeds were sown for further unrest and nationalism was spreading like wildfire. The government arrested Lajpat Rai for his involvement and sentenced him to transportation to the Nicobar islands in the Bay of Bengal to serve a life sentence in exile, however this was later commuted to six months and he returned a hero.

Realising that world support would be crucial in gaining independence Lala left India in 1914 to canvass for support first in London and then he went onto the USA where he founded the Indian Home Rule League of America in New York. He sought moral support from the U.S. senate as he petitioned them citing Britain's maladministration of India and the hope of a nation looking for self determination just as the Americans did previously in their successful fight for independence in 1776.

In 1920 he returned to India with a new found determination to lead the fight for independence. In the same year his contribution was recognised as he was elected President of the Indian National Congress giving him a louder voice from which to spread his nationalistic message.

In November 1927 the British government appointed the Simon Commission, whose members were all British parliamentarians, to conduct a study into constitutional reforms and report back to Westminster. Because no Indians were involved in the commission it was strongly opposed by all members of the Indian National Congress and Muslim League as they viewed it as a violation of their right to obtain self determination. In 1928 Lala Lajpat Rai led a peaceful demonstration in Lahore against a visit by the Simon Commission. The procession marched towards the Lahore Railway station where they were met by the full force of the baton wielding police who showed no mercy in their onslaught against the protesters. Lajpat Rai was specifically targeted and wounded during the beating he received, undaunted he was bloodied but unbowed and he later delivered a rousing speech whereby he uttered the immortal quote: "Every blow hurled at me will prove a nail in the coffin of the British Empire", he calmed the crowd who were hungry for revenge and crucially did not realise the extent of his injuries. Lala Lajpat Rai never fully recovered from this beating and died a martyr to the cause of Indian independence.

With his demise the Swadeshi Movement gained added traction with Mahatma Gandhi and Jawaharlal Nehru both continuing in his footsteps using passive resistance as a tool against the British Raj. The martyrdom of Lala Lajpat Rai would live long in the memories of Indian's of all political persuasions and proved an inspiration for a generation who adopted his patriotic cause fighting peacefully for the right to self determination. His adult life was devoted to selfless service to the Indian public through his impassioned work as a social reformer who helped the starving during famines and organised relief for the survivors of the earthquake that hit the Kangra district of Punjab in 1905. But it is his freedom fighting against the might of the British Empire that is his most lasting legacy as he is fondly remembered as one of the columns of unflinching stability in the fight for independence.

As a prodigious author his words have lived on carrying his influence to each generation of interested scholars keen to understand the full story of independence, when he spoke it carried great meaning as people hung off every phrase and saying he uttered, it also gave me great pleasure in compiling this list of 26 of the best Lala Lajpat Rai quotes.

Mahatma Gandhi paid this fine tribute: "Lala Lajpat Rai is dead. Long live Lalaji. Men like Lalaji cannot die so long as the sun shines in the Indian sky. Lalaji means an institution. From his youth he made of his country’s service a religion. And his patriotism was no narrow creed. He loved his country because he loved the world. His nationalism was international"

Mahatma Gandhi also talked of his legacy: "So long as the sun shines in the Indian sky, persons like Lalaji will not die"

Jawaharlal Nehru spoke of his shock and reaction at being beaten whilst staging a peaceful protest against the Simon Commission: "He felt angry and bitter, not so much at the personal humiliation, as at the national humiliation involved in the assault on him"

The poet Rabindranath Tagore shared this advice with him: "Peace is a good thing, but life is still better"

The writer Sachidanand Sinha described him thus: "Lajpat Rai was essentially a man of action... But he was not for violent changes either in the political or in the social fabric of society. He was on the side of order and progress"

Sachidanand Sinha added this inspiring tribute: "Lajpat Rai never made a bid for an official smile, he never went back on his convictions. And so he had left to India the great example of his life, his unflinching courage, his spirit that faced persecution and suffering undismayed, his tireless beneficence, his splendid patriotism, and his unshaken faith in the ultimate emancipation of his Motherland"

The chief justice of India, Mohammad Hidayatullah was impressed to say: "The fight for independence was fought by many, but there were few like this Lion of Punjab"

The author Jyotish Chandra Ghosal gave this assessment: "Lalaji was convinced that the fabric of Free India must be built on the bedrock of literacy, social reform and racial unity" 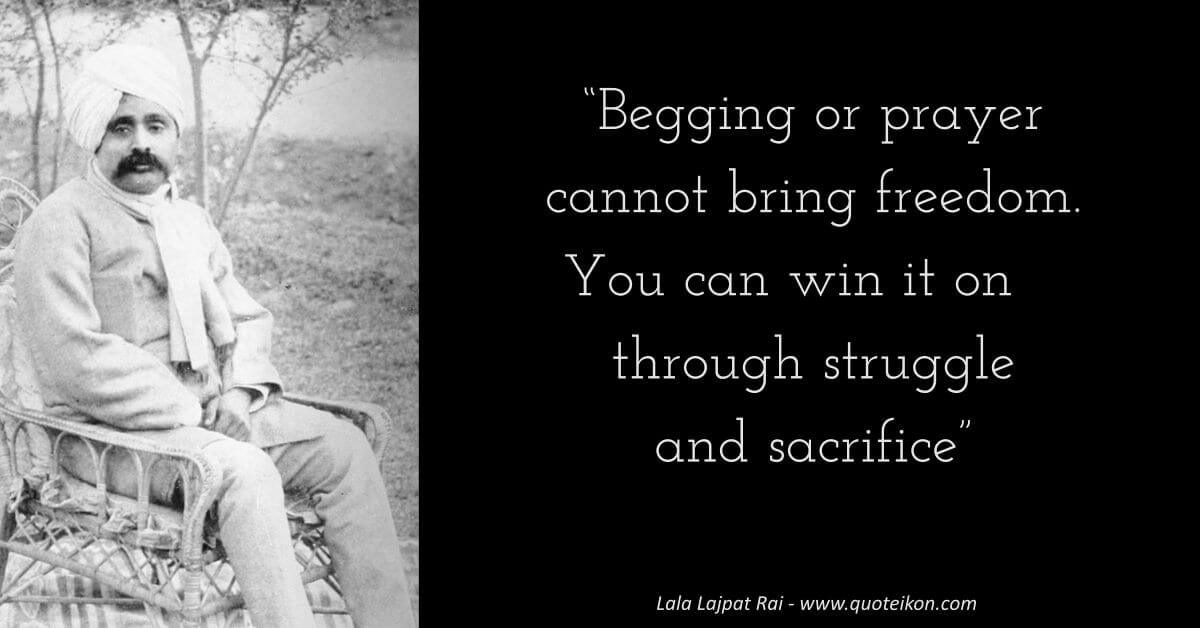