Every country that was forced to submit to the rule of colonialists and fought back have their heroes like Scotland's Robert The Bruce, Italy's Giuseppe Garibaldi, China's Zhu Yuanzhang and the Mexican Pancho Villa are a few that spring to mind.

India the sprawling sub-continent of south Asia has had its fair share of rebel leaders also including a remarkable heroine called Queen Rani Of Jhansi who proved a major thorn in the side of the colonial powers of Great Britain in the mid nineteenth century.

Rani married young to the elderly Maharaja of Jhansi who died childless but as a last act adopted a son to take over his position of power according to Indian tradition. The British saw this as an opportunity to extend the realm into northern India and dismissive of the law abiding and peaceful appeals from Rani Lakshmibai they took control in a contemptible fashion.

Clearly unhappy at the injustice Rani bided her time waiting for the right moment to strike back, all the time laying the seeds for an uprising. During the uprising of 1857 the British were slaughtered at Jhansi and Queen Rani set about her preparations for when the avenging British army would arrive.

When the siege began in March 1858 Rani's men held out for 17 days until all was but lost and in a daring escape through the British ranks she lived to rouse another army to keep the rebellion going. She fought many more brave battles before she was cornered at Kotah-ki Sarai in June 1858, here she fought heroically to the last, even in the throes of death she tried to shoot the English soldier who delivered her fatal blow.

The British military were taken aback by the strength and determination of the rebels and especially their warrior queen leader Rani, whom general Hugh Rose was quoted to say: "The Indian mutiny has produced but one man, and that man was a woman".

After her death the British gave her adopted son Damodar Rao a pension and a warning not to pursue his rightful inheritance, he never did become a ruler of Jhansi.

Gone but never forgotten, every Indian rebel that took up the cause of Indian independence did so in her footsteps and her legacy is a hallowed place in the colourful history of India. Great leaders lead by example using few words, but when they do utter a saying they give it real meaning, so here is my compilation of 10 of the best Queen Rani Of Jhansi quotes

Quotes About Queen Rani Of Jhansi

The British military commander Sir Hugh Rose was respectful of the warrior queen: "She was the bravest and best military leader of the rebels. A man among mutineers"

Lord Cumberland recognised the threat the posed: "The Rani is remarkable for her bravery, cleverness and perseverance..... These qualities, combined with her rank, rendered her the most dangerous of all the rebel leaders"

The professor of literature at Brandeis University Harleen Singh spoke of Queen Rani's nationalistic spirit: "It’s female heroism that is bound to the family and the nation.... In a way, she’s considered singular - and she is singular - because she fought for the nation, for something larger than herself"

Colonel George Bruce Malleson looked back with this rationale: "Whatever her faults in British eyes may have been, her countrymen will ever believe that she was driven by ill-treatment into rebellion; that her cause was a righteous cause; and that the treatment she received at the hands of Lord Dalhousie was one of the main causes of the disaffection in Bundelkhand and Central India in 1857-8. To them she will always be a heroine" 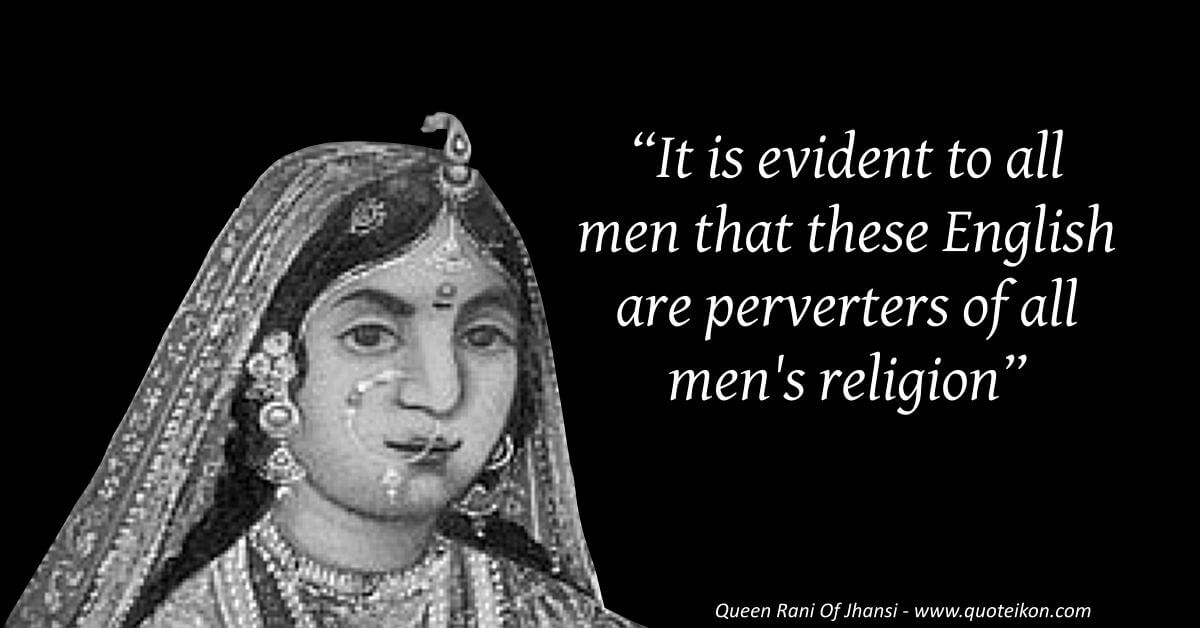