Kabir was the Indian poet whose selfless acts have inspired countless generations with his words that have echoed down half a millennia where they are still held as important to Indian culture today as they were when first spoken by the great man back in the 15th century.

During his life Kabir both inspired and outraged in equal measure, the great religions of Hinduism and Islam both supported him and attacked him but upon his death they were both adamant to claim him as their own such was the high esteem both religions regarded his work and his legacy to be worth. Kabir gained respect because his words were backed up by the way he lived making morality, compassion and unselfishness the required traits to find the love of God.

The teaching of Kabir showed that Hindu's and Muslim's could share a universal path as he broke down the barriers used to divide the religions. Kabir had a deep dislike for dogma's which he opposed in both religions as he showed an enlightened path to the common ground of a shared spirituality that was appreciated on both sides of the religious divide. He despised the Hindu societal caste system and questioned the reasoning behind idol worship, whilst demonstrating a clarity of belief in Bhakti and Sufism.

His poetic legacy is both large and impressive with his most famous work being "Bijak" which is known as the sacred book of Kabir devoted to his teachings. Other significant works that have survived are the Anurag Sagar, Kabir Granthawali and Sakhi Granth.

Kabir believed in equality across the human race regardless of ethnicity, skin colour or religious preference, he was a fearless exposer of hypocrisy, greed and religious tyranny as he spread a message of truth against pretensions, forgiveness against bigotry and goodness of heart regardless of conformism. He simplified his teachings into couplets for the common man to easily understand and when the Brahmin priests treated him with scorn and ridicule he never reacted with angry words which also endeared him to the people of the lower castes.

He opened the minds of many people with his sayings and powerful phrase of word with deep meaning such as this wonderful Kabir quote: "Saints, I see the world is mad. If I tell the truth they rush to beat me, if I lie they trust me". Even in death he was a non-conformist as he travelled to "Maghar" where the upper caste Brahmin priests had declared it a cursed place that any person who died in this region would never be allowed into heaven. It was his last act of defiance against the dogma's of medieval India and it has saw him elevated to the pedestal of sainthood as he saw this as the best way to demolish the myth.

The early 20th century writer Rabindranath Tagore translated many of his poems in 1915 whilst other famous Indians that have found inspiration from Kabir are: Guru Nanak, Jawaharlal Nehru, Mahatma Gandhi, Narendra Modi and Queen Rani of Jhansi.

The Poet Kabir is widely regarded as one of the finest sons of the Indian sub-continent who best captures the essence of the soul of India as his legacy of devotion to his principles that have rippled through the generations and lavished those with the open mindedness to understand the qualities of selfless acts, mercy and forgiveness across all walks of life that will shine the path to true individual righteousness. As one of the great poet orators his words were spoken wielding influence with great meaning that has inspired me to compile this list of 25 of the best Kabir quotes.

Indian Prime Minister Narendra Modi was praiseful: "The entire life of Kabir was spent in the quest to find the truth and countering the falsehood. Kabir emphasised not on belief, but on knowing. He was a free spirit, penniless and austere he was like a servant before the servants of God but very courageous in front of emperors. A person with clean heart and sound mind, he was soft inside though appeared tough outside. He became worthy of worship because of his deeds and not because of the occupation of the family he was born into"

The scholar Dr Harisharan Das Shastri summed him up thus: "Kabir had dared to challenge the supremacy of the purohits at a time when none had the courage to do so…. the purohits did not like him ... Kabir belongs to all…. his teachings are universal"

The poet Mary Karr spoke of his inspiration taken from nature: "Kabir lists ‘birds and animals and the ant’ in a way that draws the eye from the soaring sky to the earth’s crawly, exoskeletal creatures. In doing so he connects a vague, blank heaven and the tiny, miraculous particulars"

Mahant Vichar Das, the head of the trust who looks after his mausoleum shares this observation: "Kabir’s philosophy is perhaps the most relevant one in today’s world… it can bring peace on the earth as it preaches equality among all the religions"

The author Koenraad Elst gave this assessment: "Kabir’s relative originality lies in his combination of devotion with the conception of the object of devotion as faceless (nirguna, “without quality”) rather than iconographically distinct, but that doesn’t place him outside the Hindu continuum... Scholars who place Kabir (or Sikhism founder Guru Nanak) as much outside Hinduism as outside Islam, may be suspected of projecting non-Hindu, mainly Christian categories of box-type religious divisions onto a civilization in which they don’t apply"

The scholar Linda Hess commented on his somewhat theologian acceptance: "While there is evidence that both Hindus and Muslims were ready to assault Kabir physically during his lifetime, they have since his death been ready to assault each other over the privilege of claiming him as their own"

The English writer Evelyn Underhill talked of his vision: "Kabir belongs to that small group of supreme mystics amongst whom St. Augustine, Ruysbroeck, and the Sufi poet Jalalu'ddin Rumi are perhaps the chief who have achieved that which we might call the synthetic vision of God"

The author George Herbert Westcott described him thus: "The whole background of Kabir’s thought is Hindu"

The French Indologist Charlotte Vaudeville talked of his philosophic roots: "Circumcised or not, Kabir was officially a Musalman, though it appears likely that some form of Nathism was his ancestral tradition. This alone would explain his relative ignorance of Islamic tenets, his remarkable acquaintance with Tantric-yoga practices and his lavish use of its esoteric jargon [in his poems]. He appears far more conversant with Nath-panthi basic attitudes and philosophy than with the Islamic orthodox tradition" 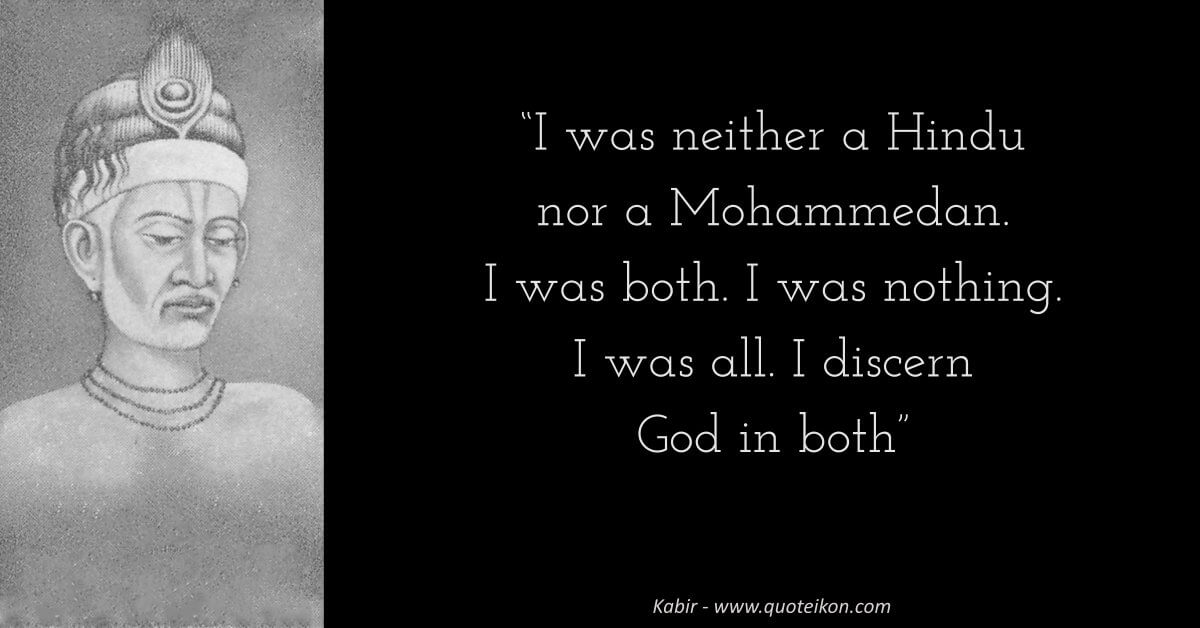