Jean Moulin was the French resistance leader that made the ultimate sacrifice for France when he withstood his infamous Gestapo torturer Klaus Barbie who was responsible for the deaths of more than 4,000 people during WW2.

Moulin had some history with the Germans during WW1 when he was keen to enlist but had to wait until his 18th birthday before they allowed him to sign up to fight for his country. After basic training he was sent to the front just as the armistice treaty was signed but he was still shocked by some of the things he witnessed. He saw the plight of British POW's suffering from malnutrition after being half starved to death, many didn't make it and some died through trying to eat too much too soon so they had to be rationed to protect themselves.

In a letter to his parents he spoke of the grim reality of being a POW: "They are scary. They are just skeletons. I chatted with one of them at the English canteen. He couldn’t have weighed more than 30 kilos (66 pounds). He told me everything they had suffered. It's horrible". His dialogue with the POW's made clear their suffering at the hands of the Germans and this painted a picture in his mind that would stay with him for life.

In between the wars he joined the French civil service and excelled gaining promotions and eventually becoming the then youngest prefect in France in the commune of Chartres. Pressure in Europe was building as the Germans were invading country after country and in 1940 France was plunged into another world war as Adolf Hitler's German Panzer tanks scythed their way to a victory attained in just 6 weeks.

In June 1940 he was to have his first run in with the Gestapo and their infamous methods of torture. As Prefect of the area of Chartres the Gestapo were demanding that he sign a document stating the Nazi killing of civilians including women and children was committed by Senegalese troops in the French army, to which Moulin bluntly refused which led to several hours of torture at the hands of a Nazi sadist.

After his ordeal for the day was over he feared that he might not be able to resist a second day of torture by his German captors so he tried to take his own life by cutting his throat, but without an instrument sharp enough to succeed a German officer saw what was happening and rushed him to hospital and he survived. He lost his position as Prefect but he saved his own life and decided to go to London to find and offer his services to the leader of France in exile Charles de Gaulle.

De Gaulle gave him funds and instructions to unite all the resistance factions in France and he was parachuted back in as a man on a mission. His mission was accomplished when on the 27th May 1943 after a meeting of the largest resistance groups he created the National Council of the Resistance. His success was to be short lived as a traitor betrayed him and other resistance fighters and the Gestapo swooped on 21st June 1943 and captured him in Caluire, a suburb of Lyon.

It was to be his second and last run in with the Gestapo as his interrogator was SS Lt. Nikolaus "Klaus" Barbie who later gained infamy as he was labelled the "Butcher of Lyon". For 3 weeks he endured unbelievable pain and Barbie even propped him up in his office and brought other members of the French resistance in to see what would happen if they did not cooperate. Moulin did not reveal any useful information and eventually succumbed to his wounds as he was martyred in the name of liberty for France.

In 1964 he was honoured and his ashes were interred in the French patriotic monument The Panthéon in Paris as the occasion was marked by what has been described as the greatest speech in French history by the eloquent French Minister of Culture André Malraux. He is in good company as two other heroines of the French resistance are also buried there: Geneviève de Gaulle-Anthonioz and Germaine Tillion, not to mention the likes of Alexandre Dumas, Émile Zola, Jean-Jacques Rousseau, Louis Braille, Marie Curie, Victor Hugo and Voltaire to name but a few French legends. He has deservedly attained legendary status as a hero of France so it is an honour for me to share my compilation of 16 of the best Jean Moulin quotes

Charles de Gaulle spoke passionately of his loyal subject: "Betrayed, taken prisoner, horribly tortured by an enemy without honour, Jean Moulin would die for France, like so many good soldiers who, under the sun or in the shade, sacrificed a long empty evening to better fill their morning"

His sister Laure Moulin reminded us of his sacrifice when she said: "His part was played, and his ordeal began. Jeered at, savagely beaten, his head bleeding, his internal organs ruptured, he attained the limits of human suffering without betraying a single secret, he who knew everything"

Fellow resistance fighter André Malraux and French minister of culture recalled his sacrifice with the following 3 quotes: "Today, young people of France, may you think of this man as you would have reached out your hands to his poor, unrecognisable face on that last day, to those lips that never let fall a word of betrayal: On that day, his was the face of France"

André Malraux added this: "Let us be quite clear that, for the days in which he was still able to speak or write, the fate of the whole Resistance hung on the courage of this one man. As Mademoiselle Moulin put it, he knew everything"

André Malraux: "Georges Bidault took his place. But now came the victory of a silence for which such an atrocious price was paid: the wheel of fortune turned. Leader of the Resistance martyred in hideous cellars" 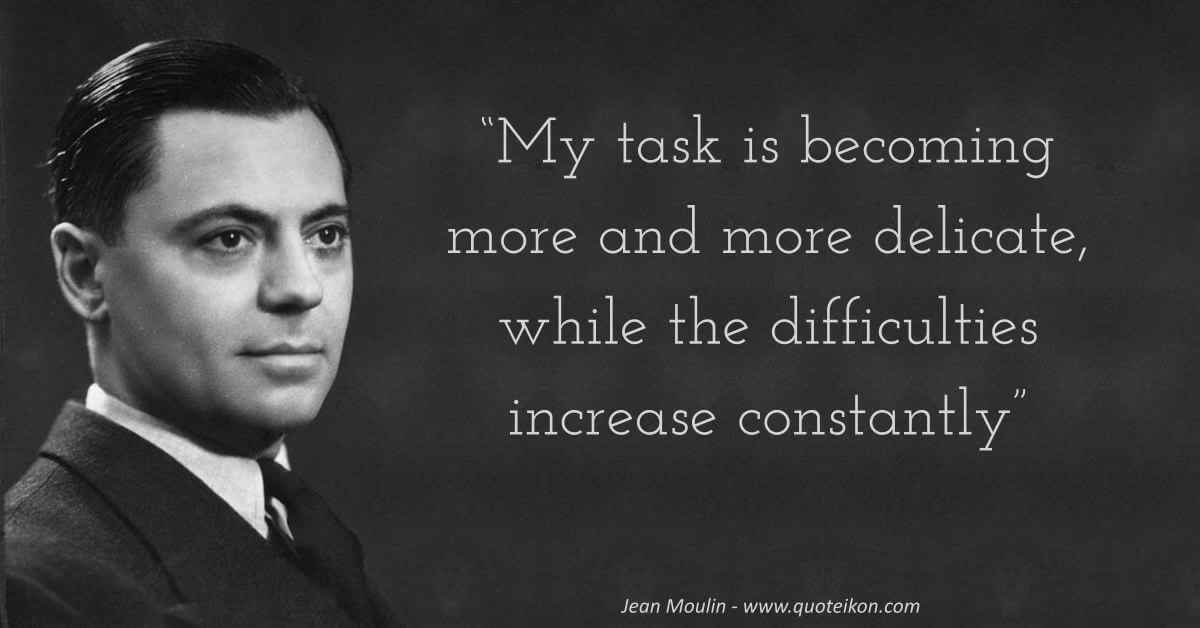