Haile Selassie was the son of a chief adviser to Ethiopian Emperor Menelik IIl and he impressed the ruler so much he was awarded certain responsibilities in which he excelled and this garnered more favour with Menelik until Selassie became heir presumptive to the emperors throne.

In 1930 upon the emperors death Haile Selassie succeeded him to the throne and he also became a religious cult icon 12,000 kilometers to the west in Jamaica where the rastafarian movement was started as they proclaimed him as their redeeming messiah who would give deliverance back to their spiritual ancestry of Africa.

Although born as Ras Tafari Makonnen he changed his name to Haile Selassie upon his ascendancy to be crowned as the new Emperor of Ethiopia in 1930. To add authenticity to him becoming emperor it was claimed he was through his Amharic roots a direct descendant of King Solomon and the Queen of Sheba.

He had become the 226th Negus (emperor) of Ethiopia and during his tenure he acquired a number of legendary titles including King of Kings and the Lion of Judah as the mystique around his persona grew in stature especially during the bloody occupation by the armies of Benito Mussolini in the 1930's.

In a musical tribute the Bob Marley song "War" uses the translated to English words of a 1963 Selassie speech to the United Nations. Marley looked up to the emperor and he was quoted as saying this of him: "If it weren't for Haile Selassie, would anyone know Rastafari? No one would know Rastafari. So Haile Selassie save the earth"

The military coup d'état and his subsequent assassination in 1975 marked the end of an unbroken reign of 705 years of the Solomonic dynasty after it had been reinitiated in 1270 by Yekuno Amlak.

People with such elevated status seldom live uneventful lives and tend to deliver some great one liners, so here is my compilation of 13 of the best Haile Selassie quotes

Nelson Mandela was impressed to say in 1961: "Ethiopia has always held a special place in my own imagination... I felt I would be visiting my own genesis, unearthing the roots of what made me an African. Meeting the emperor himself would be like shaking hands with history"

Bob Marley was moved to say: "We know God is Haile Selassie, Him Mighty God. Now Him save the poor earth right now, and Him save the people"

The Shah of Iran Mohammad Reza Pahlavi spoke fondly: "It was always with great pleasure that I met the Emperor of Ethiopia, Haile Selassie who had shown great patriotic energy in his resistance to Italy. Our conversations were frank and animated"

The actor and activist Paul Robeson: "Yes, all Africa remembers that it was Litvinov who stood alone beside Haile Selassie in Geneva, when Mussolini's sons flew with the blessings of the Pope to drop bombs on Ethiopian women and children"

In 1920 Marcus Garvey an outspoken Jamaican political figure made a statement which was to be the basis of the Rastafarian movement after Ras Tafari Makonnen was crowned the new Emperor of Ethiopia: "Look to Africa for the crowning of a Black king" 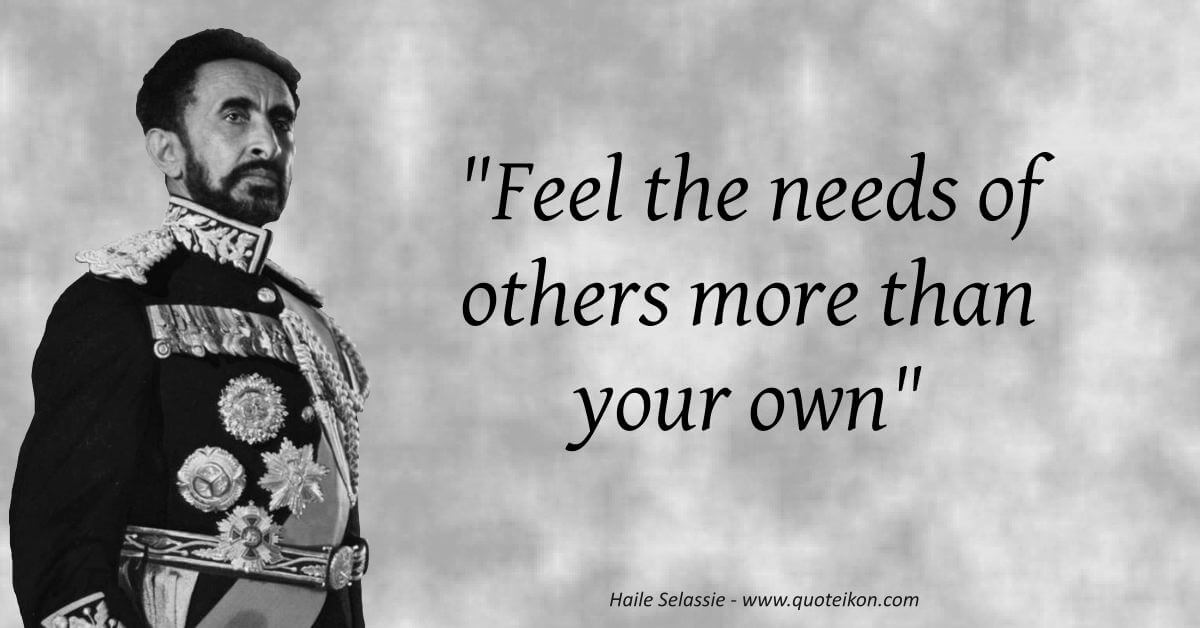