More than a century before the Moptop phenomenon of Beatlemania, Europe witnessed a musical artist who exerted the same hypnotic influence over his audiences when Franz Liszt performed in his concerts to scenes of delirious adulation that was termed at the time as "Lisztomania".

The first occurrence of Lisztomania was when Franz Liszt was at the peak of his popularity as a classical concert pianist as he took Berlin by storm in 1841 driving the crowd to a level of hysteria never witnessed before at a European concert. Liszt was two years into an eight year European concert tour and the momentum was building, initially the spontaneous euphoria during and after his performances was put down to German nationalist feelings, but when the same fervour was witnessed in the concert halls of Italy and France it was thought that Liszt had an hypnotic influence over his audience which was deemed contagious.

Screaming girls would fight over his handkerchief or gloves as they swarmed all over Franz Liszt trying to get a lock of hair or any memento in much the same way latter day fans would clamour over Frank Sinatra or Elvis Presley in the 1950's or the Beatles in the 1960's.

On stage Franz Liszt had a capacious charisma and a gripping intensity that both charmed and stirred up emotions in the crowd, it was as if he had a sixth sense that understood how to inspire and the larger the audience the bigger the performance. As an entertainer he had the magic to engross but as a pianist there were no equals in his generation.

Liszt was a child prodigy who received piano lessons from an early age, his debut performance at the "Landständischer Saal" in Vienna in 1822 was well received in aristocratic circles and a bright future beckoned for the promising pianist.

The death of his father in 1827 affected Liszt who was only 16 and he lost the motivation for live performance for a number of years. He had followed his mother to Paris and gave piano lessons to make ends meet. Paris was the cultural capital of the world and Franz mixed in well within the artistic and literary circles of the day meeting such luminaries as Victor Hugo, Frederic Chopin and Alphonse de Lamartine.

A 1932 concert in Paris by the Italian violinist Niccolò Paganini had such an inspiring effect on Liszt he went away with both a dream and the determination to make the most of his talent and become a virtuoso pianist at the same level as the great Genoese violinist he had just witnessed.

Liszt also had a passion for the ladies, he cut a dashing figure as tall, with dark long hair and extremely handsome, he oozed charisma as he charmed his way through the established aristocratic salons of Paris rubbing shoulders with the elite of French society. There were many mistresses but two in particular had a major effect on him both personally and professionally. His first significant affair was with Countess Marie d'Agoult whom he met in 1833 and she wasted no time in leaving her husband for Liszt. There was a high price to pay for this liaison as they were forced to leave Paris to avoid a scandal, however this cost was nothing in comparison to the prolific musical output he achieved during this period. The Countess bore him three children and they stayed together until 1844 when the pressure of Franz constantly touring became too much and they separated.

The second significant lady in Liszt's life was Princess Carolyne zu Sayn-Wittgenstein whom he met in 1847 and she managed to convince him to stop touring as a virtuoso pianist and concentrate on expanding his existing body of work. In 1848 Liszt took up the position of senior director of the court orchestra in Weimar, although a change of direction from a concert pianist the position gave the composer the time to create many new compositions.

His time in Weimar was very productive, up until this time conductors were very passive in their movements but Liszt took the baton and turned conducting into a performance art in its own right, for the first time the passion of the conductor could be seen and it was an inspiring sight.

It was in Weimar that Richard Wagner was coming to prominence as Liszt raised the profile of Wagner by guiding and conducting his operas whilst he was in exile. Among Wagner's successes during this period under Liszt were the operas "Tannhäuser" and "Lohengrin" and the two great composers of this era formed a friendship that would last a lifetime.

Liszt spent the remainder of his years between Budapest, Rome and Weimar, this was a sad period for him as he lost his son Daniel at age 20 and his daughter Blandine at the age of 26. The conductor turned to religion for solace and received some minor ordinations into the catholic church and became an honorary canon of Albano just outside Rome.

Whilst Franz Liszt stole the hearts and minds of concert goers during his eight year tour that gave him legendary status as a live performer, his entire body of works, although well appreciated at the time, did not occupy the same level of adulation received during his concerts until the twentieth century. As a pianist Liszt pushed the boundaries of technique with challenging solo's such as the "Grandes études de Paganini" and "Three Concert Études" that required an advanced command of the piano to perform. His 12 symphonic poems contributed to extending harmonic development beyond the realm of hitherto orchestral resourcefulness into an innovative new era of improvisation and with his symphonies he added a depth of imagination as experienced in the "Faust Symphony", "Dante Symphony" and the "Mephisto Waltzes".

The legacy of Franz Liszt stands strong with the classical greats such as Beethoven and Mozart, he was an artist's composer who delved into the cultural influence of the poetic, literary and art world of the Romantic period to produce his major compositions. As a performer Liszt introduced the concept of the pianist as a headlining star whose stage presence was as magnetic as his delivery was intense, his forceful playing style was manic to the extent he often lined up two pianos on stage because his ferocity on the keys would often leave them damaged and the crowd fighting over broken strings discarded to them as a souvenir.

Adored during his day, appreciated as a classical genius in the modern age, he was also generous with his words, so this is my compilation of 25 of the best Franz Liszt quotes.

The German poet and literary critic Heinrich Heine described how he came by the phrase "Lisztomania": "When formerly I heard of the fainting spells which broke out in Germany and specially in Berlin, when Liszt showed himself there, I shrugged my shoulders pityingly and thought: quiet sabbatarian Germany does not wish to lose the opportunity of getting the little necessary exercise permitted it... In their case, thought I, it is a matter of the spectacle for the spectacle's sake...Thus I explained this Lisztomania, and looked on it as a sign of the politically unfree conditions existing beyond the Rhine. Yet I was mistaken, after all, and I did not notice it until last week, at the Italian Opera House, where Liszt gave his first concert...This was truly no Germanically sentimental, sentimentalizing Berlinate audience, before which Liszt played, quite alone, or rather, accompanied solely by his genius. And yet, how convulsively his mere appearance affected them! How boisterous was the applause which rang to meet him!...What acclaim it was! A veritable insanity, one unheard of in the annals of furore"

Heinrich Heine went on to describe him thus: "How powerful, how shattering was his mere physical appearance"

The polish pianist Carl Tausig was complimentary: "Liszt dwells alone upon a solitary mountain-tp and none of us can approach him"

The composer Frederic Chopin recognised his greatness: "He will give me a little kingdom in his empire"

Hans Christian Andersen remarked on his presence: "When Liszt entered the saloon, it was as if an electric shock passed through it. It was as if a ray of sunlight passed over every face"

The critic Eduard Hanslick was impressed to say: "His playing was free, poetic, replete with imaginative shadings, and, at the same time, characterizes by noble, artistic repose. And his technique, his virtuosity? I hesitate to speak if it. It suffices to observe that he has not lost it but has rather added to it in clarity and moderation. What a remarkable man! After a life incomparably rich and active, full of excitement, passion, and pleasure, he returns at the age of sixty-two and plays the most difficult music with the ease and strength and freshness of a youth"

The composer Richard Wagner posed what he considered an unanswerable question: "Do you know a musician who is more musical than Liszt?"

Richard Wagner went on to add: "I feel thoroughly contemptible as a musician, whereas you, as I have now convinced myself, are the greatest musician of all times"

The critic Peter G. Davis shared this observation: "Many musicians consider Liszt to be the greatest pianist who ever lived" 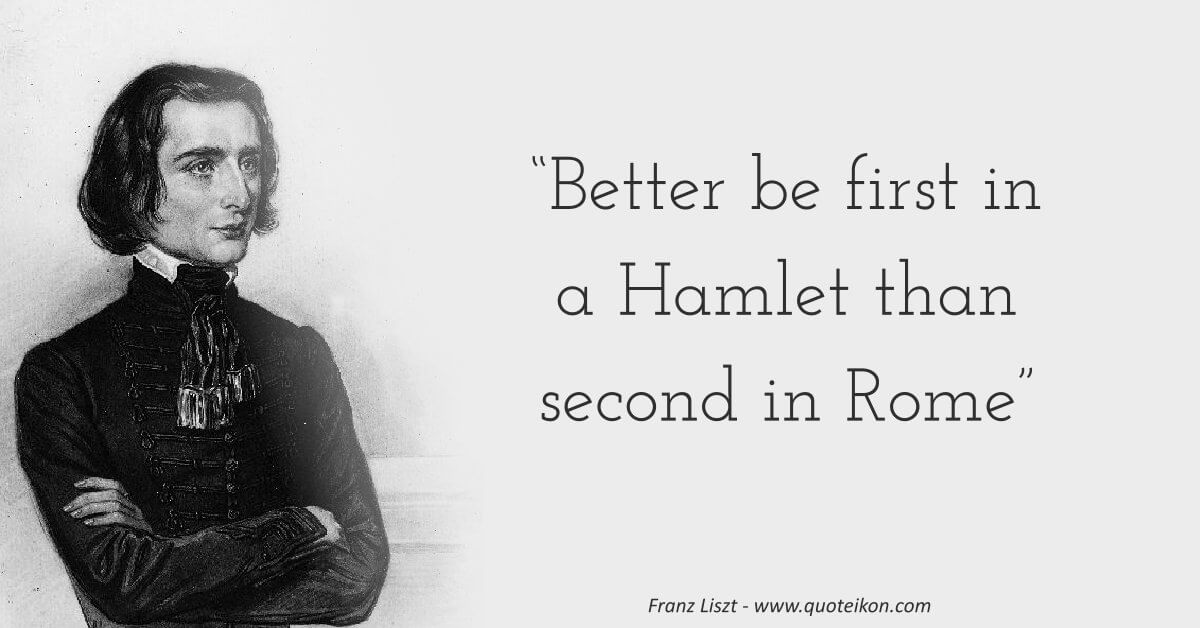