As Polish composers go Frédéric Chopin was the greatest of them all, his critical eye was obsessive in its attention to detail as he reached the pinnacle of pianistic perfection by stretching the interpretive reception of his works with a paradox of poetic popularism that still persists in the modern day active repertoire of the classics.

Chopin differed from most composers because he wrote nearly all his compositions for the piano with more than 200 of his total of just above 230 pieces being piano solo's. He was the pioneer of writing music solely for the piano showing an aptitude for the dynamic development of his imaginative virtuosos beyond what seemed the musical norm for the era.

Chopin was a child prodigy who displayed a remarkable talent under the watchful tutelage of his piano teacher Wojciech Żywny who wasted no time in introducing him to the great masters concentrating mostly on Bach and Mozart. The young Frédéric had a musical ear and a gift for the piano that saw him at the age of 15 specifically selected to give a recital to Tsar Nicholas I when he was visiting Warsaw in 1825.

Chopin was a staunch Polish nationalist who left his homeland when aged 20 just before the November uprising that was ruthlessly crushed by the Russian empire forces leaving the young composer little choice but to flee to exile in Paris as a return home would have seen him arrested.

Frédéric Chopin never returned to Warsaw but the spirit of Poland stayed with him in his adopted France. At the time Paris was the cultural capital of the world that attracted the finest artistic minds of Europe as the young composer shared the inspirational spirit of the generation of Romanticism that was to influence the arts throughout the nineteenth century.

Chopin was well received in the salons of Paris where he mixed with the wealthy and made a lucrative living teaching piano to their sons and daughters. The atmosphere of the era was conducive to composing and he added to his body of works continually with classics such as "Etudes", "Nocturnes", "Polonaises" and "24 Preludes" being just some shining examples in his portfolio of contrasting styles.

He suffered ill health throughout most of his life that was exasperated by his hypercritical analysis whereby he could seen adopting a manic persona in his attempts to transit his musical thoughts onto paper as he worked and re-worked each piece dozens of time in a bid to satisfy his lust for musical perfection.

In his personal life Frederic Chopin never married although he did have a number of affairs and embarked on a passionate nine year relationship with the novelist George Sand who witnessed the decline of the great Polish composer from 1942 until the end of their relationship in 1847.

Finally Chopin succumbed to his battle against tuberculosis in 1849 when he died due to complications of the disease. Before his ultimate demise Chopin requested that "Requiem" by Wolfgang Amadeus Mozart be played at his funeral and his heart must be removed, preserved and taken back to his beloved Warsaw. His last wishes were granted and although his bodily remains are interred in Paris his heart was secretly transferred by his sister Ludwika and it now stands in an urn inside the Holy Cross church in Warsaw.

Often called the pianists' composer, the legacy of Frédéric Chopin is one of the elegant refinement of his compositions crafting a subtle sophistication using improvised techniques to produce a breathtaking portfolio of piano virtuosos. A hero in his homeland he is referred to as the greatest Polish composer and revered as a nationalistic symbol for his masterful approach to traditional musical forms such as the mazurka and the polonaise.

As a respected composer it was not just his music that carried great meaning because when he talked people listened, so this is my compilation of 24 of the best Frédéric Chopin quotes.

The critic Harold C. Schonberg gave this assessment: "Chopin was a romantic who hated romanticism. This is the paradox. It was Chopin who, of all the early romantics, has turned out the most popular. Virtually everything he composed has remained in the repertoire, and a piano recital without some Chopin on it is still the exception. In his day he was a revolutionary. To many his music was exotic, inexplicable, perhaps insane. Critics like Rellstab in Germany, Chorley and Davison in England, dismissed much of Chopin’s music as eccentricities full of earsplitting dissonance"

The Hungarian composer Franz Liszt paid him this remarkable tribute: "Music was his language, the divine tongue through which he expressed a whole realm of sentiments that only the select few can appreciate... The muse of his homeland dictates his songs, and the anguished cries of Poland lend to his art a mysterious, indefinable poetry which, for all those who have truly experienced it, cannot be compared to anything else... The piano alone was not sufficient to reveal all that lies within him. In short he is a most remarkable individual who commands our highest degree of devotion"

The writer Oscar Wilde shared this observation: "After playing Chopin, I feel as if I had been weeping over sins that I had never committed, and mourning over tragedies that were not my own"

The French novelist George Sand described him thus: "His creation was spontaneous, miraculous. He found it without searching for it, without foreseeing it. It came to his piano suddenly, complete, sublime, or it sang in his head during a walk, and he would hasten to hear it again by, tossing it off on his instrument"

The pianist Angela Hewitt shared this advice: "To play Chopin, you have to try to be a poet like him. You can be as clever or passionate as you like, but if you don't make the piano sing, you're not playing Chopin"

The French composer Claude Debussy thought him the best: "Chopin is the greatest of them all, for through the piano alone he discovered everything"

The classical pianist Emanuel Ax recognised the talent: "I'm from a Polish family, so playing Chopin was unavoidable. Although he's a national hero, his real value is universal. His connection with the piano is so complete, it feels almost as if the instrument was created to allow his music to come into the world"

The German composer Robert Schumann was impressed to say: "Hats off, gentlemen — a genius" 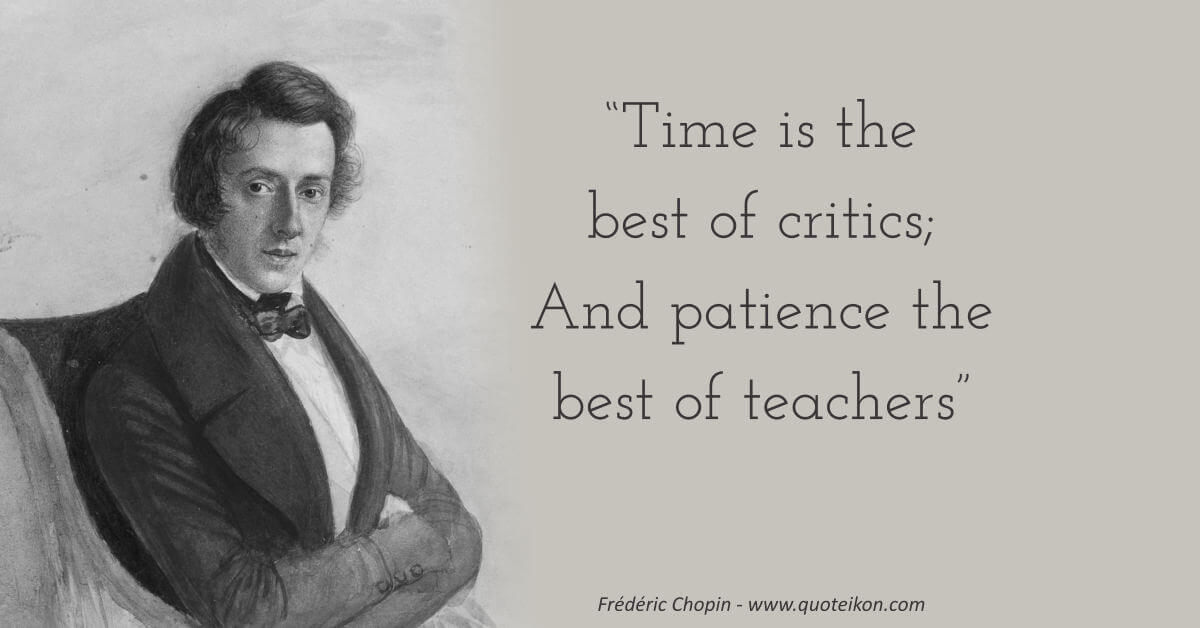