He was a man of letters. Some called him a visionary. Many label him as prophetic. Some critics were not so impressed and denounced him an overrated hack. What cannot be disputed is his understanding of the human condition. His ability to visualise the pitfalls of humanity and its contrasting human potential make him stand out in the pantheon of 20th century writers of high esteem. His name was Aldous Huxley and his legacy becomes more enduring as the years pass by.

Huxley came from an eminent British family whose members excelled in the arts and science. He looked forward to a career in science or medicine but in 1911 Aldous contracted Keratitis punctata that rendered him blind for two years.

Although his eyesight partially recovered, Aldous had to re-evaluate his goals in life. In 1916 he enlisted to join the Great War but was denied on medical grounds due to partial blindness. He retreated to what he knew best, literature.

Post graduation from Oxford, Aldous Huxley began working as a journalist with regular contributions to the Westminster Gazette, Vogue and Vanity Fair.

Aldous also took a post as a French teacher at Eton where one of his pupils was a certain Eric Blair who in later life would adopt the pen name George Orwell.

Scribing for the press paid the bills but did little to satisfy his imagination. Huxley's first published novel was Crome Yellow in 1921. Antic Hay followed in 1923 and Those Barren Leaves in 1925. 1928 saw Huxley pen his longest and, up to that point, most successful novel with Point Counter Point. The pen of Huxley was warming to the task, the best was yet to come.

Huxley was now an established writer. The stage was set, the opportunity was his for the taking. 1932 was the year, the novel was called Brave New World and this was his first journey through a dystopian landscape.

Brave New World had an impact. It soon garnered a history of controversy and censorship. Ireland, India and a few U.S. states have deemed it offensive enough to be banned. Interestingly, it is in recent years that it has provoked much discussion with the American Library Association stating it is one of the most challenged books of the 21st century.

It is in the dystopian world of novels where some very interesting comparisons have been made with Brave New World. In 1949 Huxley's former pupil, George Orwell, published a best seller called Nineteen-Eighty-Four.

Orwell adopted a very different narrative. His dystopia was enforced by a jack-booted tyranny. Information would be withheld, books banned, the truth hidden and oppression the name of the game. Brave New World was a polar opposite where Huxley envisioned a world controlled by pleasure rather than Orwellian pain.

Brave New World depicts a future society where genetically engineered children are conditioned at an early age to follow a set path in life. It is an emotionless world lacking the spontaneity of individualism. Promiscuous sex without attachment is encouraged and the state sponsored drug Soma is given to keep the population distracted in a trance of docility.

The belonging of herd mentality is organically embraced whilst the compliance to tasteless consumerism and entertainment illustrates that everything is available but it's all devoid of any meaning. Control is the essence to conformist civility.

Many have speculated if either outcome could come to pass in the real world.

The realities of both novels have taken differing paths with the Huxleyian version taking a chillingly close resemblance to various aspects of todays world.

Fear of Nineteen-Eighty-Four's authoritarian existence has seemingly guided unconscious thought towards Huxley's Brave New World. It is as though Nineteen-Eighty-Four was the diversion required for BNW to sail into the public consciousness under fair winds rather than a questioning storm.

The actual year 1984 passed and the world carried on turning. Collective relief occupied the mind. Orwellian dystopia seemed pie-in-the-sky. Everything in the world was good. Why? Because the television and media inferred as much.

Entertainment became the new king and captured the mind. Trivialities formed the culture. The visual aspect ruled the roost whilst the Brave New World narrative was quietly being adopted beneath the virtual radar.

The world was sold on the spectacle of distraction. Huxley recognised the majority like to be entertained and he was right. The visual element can captivate and reduce individuals down to apathetic souls incapable of critical thinking.

Today, we have information overload with multiple narratives drowning in a sea of abstraction with every man's truth being the winner in the susceptible minds-eye of each beholder. The art of suggestion weaponised entertainment with subtle propaganda, to quote Aldous Huxley: "Never have so many been manipulated so much by so few", he knew where the world was going.

The social engineering of todays world uses what could be described as Huxleyian operant conditioning to make people believe they are free of mind and free to live their lives without authoritarian interference.

Rewind three score of decades and Aldous Huxley uttered a chillingly prophetic sentence during a 1961 speech at the California Medical School:

"There will be, in the next generation or so, a pharmacological method of making people love their servitude, and producing dictatorship without tears, so to speak, producing a kind of painless concentration camp for entire societies, so that people will in fact have their liberties taken away from them, but will rather enjoy it, because they will be distracted from any desire to rebel by propaganda or brainwashing, or brainwashing enhanced by pharmacological methods. And this seems to be the final revolution."

The resemblance to the 2021 culling of liberties and the subservient degree of compliance without a whisper of defiance summed up a majority that has been conditioned to believe they drew their own conclusion because sacrificing personal freedoms was the right thing to do. The lack of critical thinking has been astonishing, yet, Aldous Huxley warned us it was coming.

Dystopian futures aside, Huxley also earned a living as a Hollywood screenwriter who contributed to various movies including Jane Eyre, Madame Curie & Pride and Prejudice.

Aldous Huxley was also a long-standing friend of Igor Stravinsky. After Huxleys demise in 1963, Stravinsky dedicated a composition to his friend, it was called Variations: Aldous Huxley in Memoriam and was completed in 1964 although it did not make its stage debut until April 1965.

Huxley final novel was Island in 1962. This was a utopian paradox to Brave New World. The novelist had known for sometime he was suffering from cancer of the larynx and so it poses the question: was he trying to set the record straight?

Hope, it springs eternal. The last days before facing your maker is a time for reflection. One line of thought is Huxley feared for the prospects of a grim future but, he also yearned for the possibility that mankind could prosper in line with his pacifist leaning and universal nature. He could have wanted his legacy to include hope to counterbalance the warning laden BNW.

The day that Aldous Huxley died was notable for two reasons. He requested his wife Laura to shoot him up with 100 µg of LSD, meaning he crossed the rainbow bridge as high as a kite. Secondly, his date of death coincided with the assassination of John F. Kennedy with the latter event grabbing all the headlines. Another notable death on 22nd November 1963 was that of the writer C.S. Lewis who also missed out on a significant obituary due to events in Dallas.

The literary journey of Aldous Huxley saw him pen nearly fifty books with BNW being classed as a twentieth century masterpiece. Nine times nominated for the Nobel prize, he was not just an extraordinary writer but a philosopher of great repute and a famed creator of dystopian infamy.

Great writers are a pleasure to study and they are often responsible for some fantastic one liners so this is my compilation of 41 of the best Aldous Huxley quotes.

The novelist J. G. Ballard was impressed to say: "Aldous Huxley was uncannily prophetic, a more astute guide to the future than any other 20th-century novelist. Even his casual asides have a surprising relevance to our own times"

The philosopher Bertrand Russell poked fun at his knowledgeable friend: "You could always tell by his conversation which volume of the Encyclopedia Britannica he'd been reading. One day it would be Alps, Andes and Apennines, and the next it would be the Himalayas and the Hippocratic Oath"

Bertrand Russell shared this view on dystopias: "Utopias are written in order to make us still more unhappy. Mr. Aldous Huxley, in his Brave New World, has shown his usual masterly skill in producing this result upon the reader, for he has undertaken to make us sad by the contemplation of a world without sadness"

The novelist George Orwell made this comparison of Huxley's Brave New World to the novel "We" by Yevgeny Zamyatin: "The first thing anyone would notice about We is the fact—never pointed out, I believe—that Aldous Huxley’s Brave New World must be partly derived from it. Both books deal with the rebellion of the primitive human spirit against a rationalised, mechanised, painless world, and both stories are supposed to take place about six hundred years hence."

The author Anthony Burgess shared this review of his book "Island": "We cannot deny its brilliance, its learning, its honest attempt to answer the big human question."

Walt Disney deemed a script Huxley penned as too dark and literary and labelled it thus: "Alice in Wonderland fiend"

The religious scholar Huston Smith, shared this observation about "The Perennial Philosophy": "Huxley provides us with the most systematic statement of his mature outlook. Its running commentary deals with many of the social implications of Huxley's metaphysic"

V. S. Pritchett scribed this for the great authors obituary in The New Statesman on 6th December 1963: "Huxley enjoyed the follies of the human mind even as he stoically stood out against them...Shock was one of the luxuries of the Twenties. But for Huxley, perhaps the most accomplished educator of his generation, to shock was to ensure the course of intellectual freedom"

His brother Julian described him thus: "His uniqueness lay in his universalism. He was able to take all knowledge for his province"

The novelist Christopher Isherwood summed him up: "Fearless curiosity was one of Aldous’s noblest characteristics, a function of his greatness as a human being"

The writer Clive James was both a friend and a fan: "Godlike in his height, aquiline features, and omnidirectional intelligence, Huxley was a living myth." 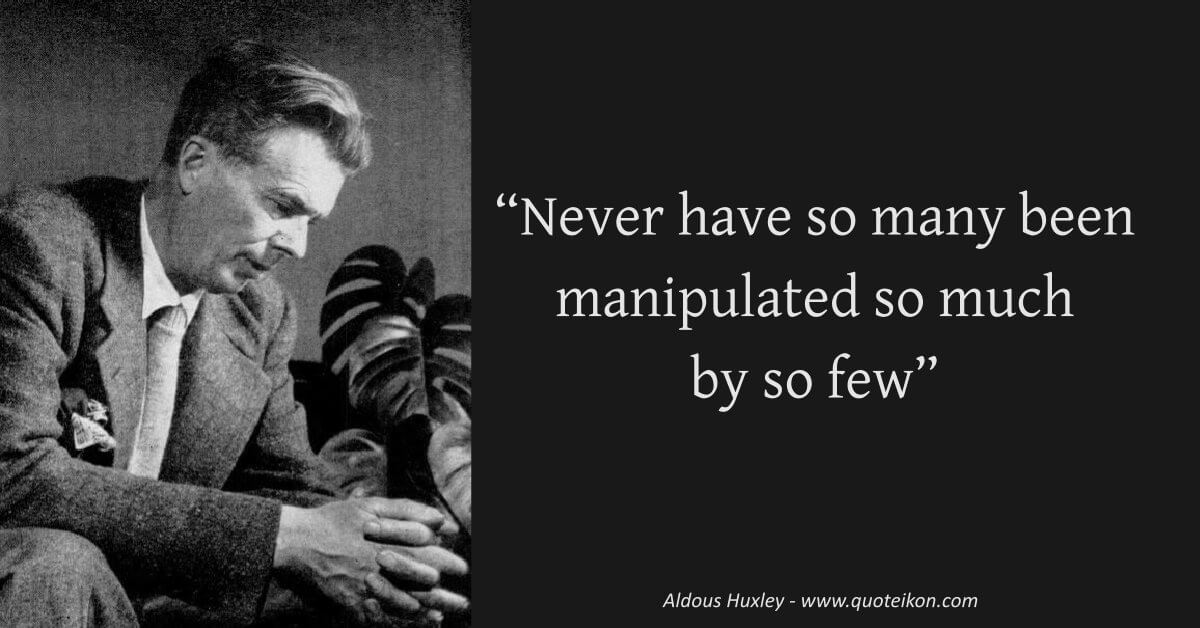