Xu Zhimo is arguably China's most famous romantic poet of the twentieth century. Idolised in Asia and revered in Europe, his silken verse still soothes the mind body and soul of subsequent generations of scholars and students alike.

Indeed, it was the city of Cambridge in England that first lit his poetic spark. His former university King's College Cambridge went as far as to honour him by setting one of his poems in a white marble stone that is now a tourist attraction.

It was here that Xu Zhimo fell in love and immersed himself in the rhyme and verse of the English romantic poets John Keats and Percy Bysshe Shelley and the writing of Thomas Hardy that influenced his thinking about Chinese poetry. Zhimo saw the gap between western arts and poetry to Chinese as a chasm and he wanted to bridge that gap to encourage his fellow countrymen into the art of poetry.

Xu Zhimo set about to translate many of his favourite works into Chinese and he also founded in 1923 The Crescent Moon Society which was a Chinese literary society that attracted like minded literary minds such as Chen Mengjia, Liang Shih-chiu and, Pan Guangdan, Rao Mengkan, Shen Congwen and Wen Yiduo. The name of the society was inspired by a book of the same name by the Indian poet Rabindranath Tagore for whom Xu Zhimo translated his works when he visited China.

Tragically Xu Zhimo's life was cut short in a 1931 airplane crash although his passion for poetry has survived with his poetic work now being part of the present day syllabus in Chinese schools. It is this which has turned the white marble stone in the gardens of Kings College Cambridge into a tourist attraction for thousands of visiting Chinese who stop to have their photos taken with the first 2 lines and last 2 lines of the Xu Zhimo famous poem 'Saying Good-bye to Cambridge Again'.

Xu Zhimo was not just a romantic poet but he was also a lover extraordinaire who charmed his way through 1920's social circles with some observers noting a fascinating resemblance to the antics of the English romantic poet and womaniser Percy Bysshe Shelley.

Amidst all the inspiring poetry there is a great story to be told about a Chinese influencer whose love for poetry has had a lasting effect on the most populous nation of the world, so as is customary with all my short bio's here is my compilation of 17 of the best Xu Zhimo quotes.

The author Patricia Ondek Laurence talked of his modus operandi: "Xu Zhimo, a romantic personality and poet, desired to unleash into Chinese life and literature the passions of the body and the personality, the drama and expression of the individual that he had observed in British romantic poetry and England of the time"

The China Daily journalist Wang Mingjie was inspired to write: "Xu wrote the famous poem Second Farewell to Cambridge in 1928, after his third visit to the university city. Filled with his longing for Cambridge as well as thoughts about his first love affair, the poem has been learned by millions of schoolchildren in China"

The horticulturist at Cambridge university Alan Macfarlane described the garden which is now a major tourist attraction: "Here we have English trees around the garden and also Chinese plants native to Xu’s home region in Haining. So it is a fusion of East and West, just as Xu Zhimo was trying to bring the cultural treasures from China to England, and from England to China. I think in a world which is filled with conflicts and threats of war, this is a peaceful resolution of some of the conflicts of civilisations" 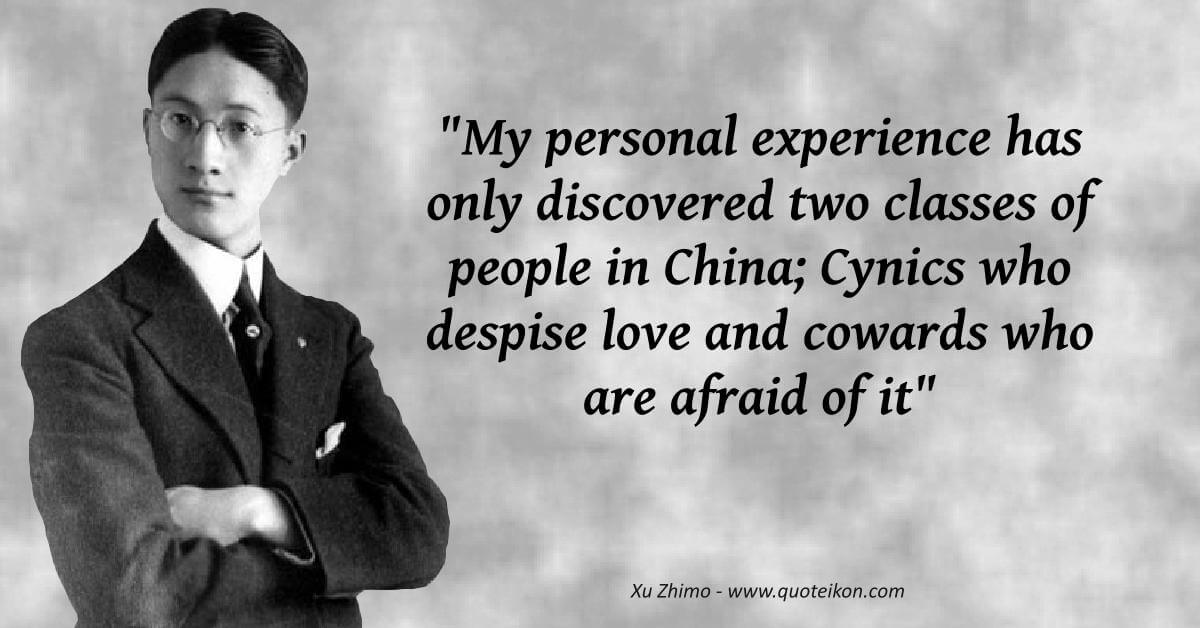