Flamboyance and an adorned artistic attitude were the hallmarks of this giant of the Spanish art world. His carefully coiffured whiskers became famous in their own right to the extent a book was dedicated to their perfectly sculpted curves. His name was Salvador Dali, the enigmatic artist with the surrealist mind that revelled in shocking the canvas.

He was, arguably, the most famous artist of the twentieth century. He even outshone his fellow Spaniard Pablo Picasso. Courting controversy was his ticket to fame and fortune. He did this to great effect both on and off canvas. An early artwork titled SacredHeart featured the words: "Sometimes I Spit with Pleasure on the Portrait of My Mother". It saw him evicted from the family home by his father and carried the essence of a developing signature shock value.

Family life was awkward for the young Salvador. His elder brother, also named Salvador. died nine months before he was born and there was always an undercurrent of resentment in the young Dali that his elder brother was more loved than he. Thoughts of sibling reincarnation haunted him. Did the family reincarnate the elder sibling by repeating the birth name? Salvador sensed his individuality being infringed with memories. His father was a direct disciplinarian whilst his mother, whom he was close to, would at least encourage the creative spark in his artistic nature. But was she encouraging Salvador the individual or Salvador the memory?

The artistic talent in Dali was evident from an early age. His education saw him first suspended and then expelled from the Real Academia de Bellas Artes de San Fernando. Salvador was contemptuous towards his art teachers who he thought lacked the talent and artistic nous to improve his creative ability. He saw in himself a pupil who was far superior to his teachers.

The lure of Paris, which was the epicentre of world art in the 1920's, and more pertinently, the French surrealist movement was an artistic attraction that Dali could not resist. He was also fascinated by Sigmund Freud's "The Interpretation of Dreams" and he believed the same methods could be adapted as a creative tool to inspire his art, the surrealists in Paris has similar ideas.

The Spanish artist Joan Miró admired his work and introduced Dali to the surrealist movement. He was initially well received on the strength of his art and artistic outlook. But he would not remain so welcome. Dali was politically removed from the surrealist Marxist thinking. He admired fascist leaders like Franco and Hitler, he even included the fuhrer in some of his artwork.

By the time Dali was expelled from the surrealist movement he had already left his mark both on and off canvas. In a 1930 collaboration with Luis Buñuel they created a surrealist movie called "L'Age d'Or" that would shock Paris to the core. Partly inspired by the story of The Marquis de Sade, it carried a message depicting a hypocritical society using both sexual and violent imagery as thought provoking catalysts. Although controversial in its day, it is now considered a classic masterpiece of surrealist cinematography.

Dali developed his own surrealist style of introspection which he called the "paranoiac-critical method" whereby he would delve the depths of his subconscious for artistic inspiration. Eventually dismissing the conceptualised art movement, Salvador Dali made a bold statement where he was quoted as saying: "I am surrealism".

It could be argued that his DNA was surrealism. His art was abstract surrealism, his life eccentric and everything he did was loud. When he got married it was to Gala, the wife of the surrealist writer Paul Eluard. Both Dali and his art craved notoriety, self-promotion became a vehicle for non-conformist expression, much to the angst of surrealists such as André Breton who gave him the anagrammatic moniker of "Avida Dollars" that hinted at commercial jealousy.

By 1940, with Europe descending into chaos, Dali and Gala, who was also his manager, emigrated to America. His art was exhibited in all the major U.S. galleries and he became very popular with American collectors.

For Dali it was not all about painting, there are many memorable artistic innovations created by this versatile artist. Whether it was sculptures or engravings or film sets or architecture, the Dali signature can be found all over the world. He even designed theatre sets including in 1927 the scenery for his friend Federico García Lorca's play "Mariana Pineda".

There are collections of his art exhibited in museums across the globe. Then there are the Dali museums in Paris and St Petersburg Florida that host permanent collections. There is also his own self-created museum in his home town of Figueres in Spain. Called the Dalí Theater and Museum, it hosts the largest collection of his works in the world.

Perhaps the ultimate artistic expression for Dali came after his death in 1989, Dali was interred in the crypt under his museums theatre stage giving Dali enthusiasts extra incentive to visit the museum knowing the artist would be listening beneath.

Even after death Dali courted controversy. In a 2017 paternity suit his remains were exhumed for DNA testing. The DNA test yielding a negative result. The sorry saga did reveal one positive when it was revealed that the Dali trademark moustache was still preserved in a perfectly groomed state that would have delighted the artist.

Together with Picasso and Matisse, Dali is rightly regarded as one of the three greatest painters of the twentieth century. His artistic innovations were ground breaking. His personality was larger than life. He even had the temerity to draw doodles on the back of restaurant cheques knowing full well the restaurateur would never cash it as its value would be worth much more than the bill for dinner.

The history of art will say Salvador Dali gave a depth of meaning to surrealism that will echo throughout eternity. He was a performer who saw the world as both his canvas and his stage whilst he revelled in his antics that often made more headlines than his art. Beneath the magnificently maintained moustache lay an eloquent tongue that inspired me to create this compilation of 30 of the best Salvador Dali quotes.

Sigmund Freud was moved to say: "I have been inclined to regard the Surrealists as complete fools, but that young Spaniard with his candid, fanatical eyes and his undeniable technical mastery, has changed my estimate"

The author J. G. Ballard described him thus: "His paintings not only anticipate the psychic crisis which produced our glaucous paradise, but document the uncertain pleasures of living within it. The great twin leitmotifs of the 20th century - sex and paranoia - preside over his life, as over ours"

The French writer André Breton shared this observation: "Dali has endowed Surrealism with an instrument of primary importance, in particular the paranoiac critical method, which has immediately shown itself capable of being applied equally to painting, poetry, the cinema, to the construction of typical surrealist objects, to fashion, to sculpture, to the history of art and even, if necessary, to all manner of exegesis"

André Breton would later call for him to be expelled from the Surrealist group, stating: “Dalí having been found guilty on several occasions of counterrevolutionary actions involving the glorification of Hitlerian fascism, the undersigned propose that he be excluded from surrealism as a fascist element and combated by all available means"

Alice Cooper, who was a fan of Dali, shared this anecdote: "Dalí’s people rang my manager and explained that he’d seen one of my stadium shows. He said it was like seeing one of his paintings come to life, and that he wanted us to work together"

The New York Times made this assessment of his time in the U.S.: "Where the other Surrealists remained essentially private people, Dali was a born performer, a man who needed an audience and responded to it. He found that audience in America, and for many years he kept it impressed and amused"

The art historian Dawn Ades described him as: "Surrealism’s most exotic and prominent figure" 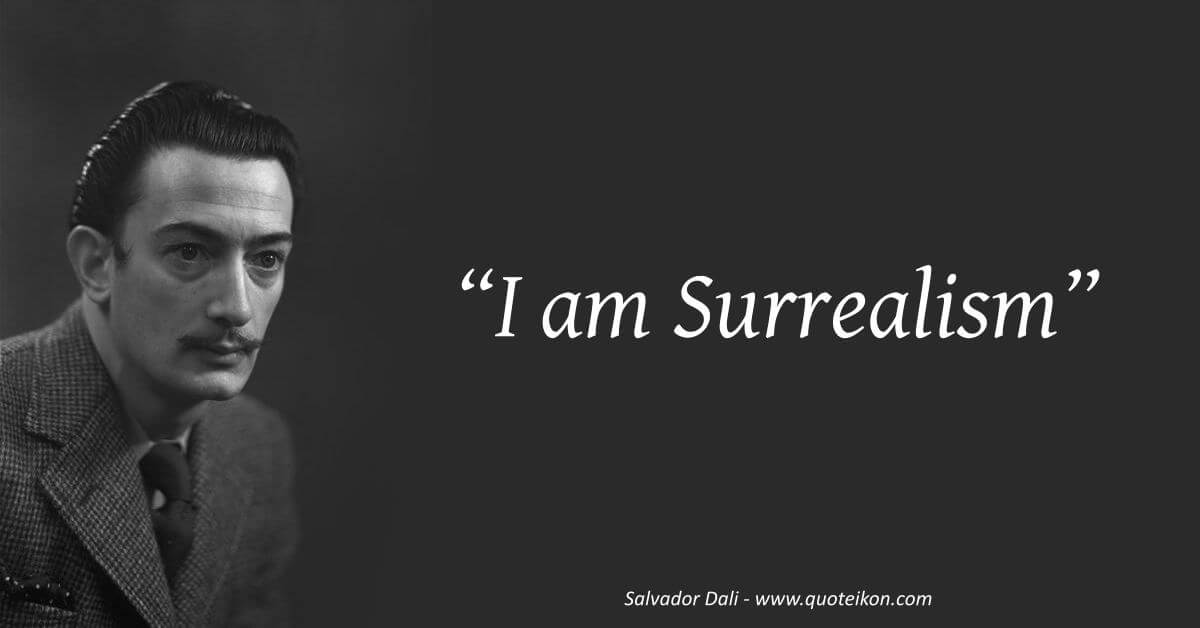