The Marquis de Sade came from the aristocracy of French society that he was to scandalise for much of his adult life. He was a self confessed libertine whose morally unrestrained outlook on life was not something he tried to hide away from the world. He was a philosopher and writer who never held back with either his actions or his words of wanton lust.

Now, writing about debauchery may have raised a few 18th century Parisian eyebrows but, actually carrying out the very deeds in real life nearly saw the guillotine raised above his neck such was the level of scandal he immersed himself in.

Indeed, many writers showing interest in the Marquis de Sade have speculated that he carried out his sordid antics before he actually wrote about them in his novels. He polarised views, theologians and the establishment hated him whereas the more bohemian writers and artists sympathised with the honesty of his attitude towards sexual desire.

His childhood did not make for happy reading, he came from a wealthy and respected line of French nobility but his father abandoned the family resulting in de Sade being sent away to various schools where corporal punishment in the form of whipping was the result for even the most minor insubordinations.

The young Marquis sensed the glee and the satisfaction from his school masters handing out physical punishments and he took this feeling into his adult life where he became obsessed with dominating his sexual partners. Administering a jolly good whipping became a habit for de Sade and one he especially enjoyed after his hapless victims were tied up by all fours.

Indeed the Marquis first scandal and incarceration involved tying up and whipping a poor unsuspecting servant girl called Rose Keller. This was the first of many tales about the sexual deviance of the Marquis and he was to spend more than 30 years of his life in various prisons and lunatic asylums where he penned a great deal of his major works.

In between incarcerations, there were plentiful tales of de Sade frequently visiting houses of ill repute and abusing both male and female prostitutes. There was an incident in 1772 in Marseilles, where his manservant, Latour, procured four young prostitutes to whom the Marquis administered the poisonous aphrodisiac Spanish fly to make them compliant to his repertoire of sexually abusive acts.

His hapless Marseilles victims, who had succumbed to de Sades will to satisfy his sadistic lust for inflicting subservient sexual cruelty, endured a torturous terror of defilement that was reported to the authorities. The shock of this incident rocked French society. Facing charges of poisoning through chocolates laced with Spanish Fly, sodomisation and flagellation that left wounds on the skin, the Marquis fled to Italy with his servant Latour.

The Marquis de Sade was tried in absentia and sentenced to death. It was not until 1777 that he was finally brought to justice. Facing his fate, with awkward thoughts of meeting his maker, de Sade caught a lucky break as he eluded his date with the blade of the guillotine on appeal due to his aristocratic connections pulling some strings.

He was to spend most of the remainder of his life in and out of prisons and mental institutions where he was a prolific writer. When he did publish, many of his books were burnt after being labeled obscene and they were eventually banned in France until 1957. He even outraged Napoleon Bonaparte who imprisoned him in 1801 for writing his novel Justine and Juliette.

The term sadism is said to have derived from his name with the German psychiatrist Richard Freiherr von Krafft-Ebing being inspired to first use the word in 1886.

The Marquis de Sade is a not the normal philosopher I like to read or take any inspiration from, he was however a fascinating character who was unrestrained by convention or morality as he let loose his poisoned pen of divergent thinking. The depth of immoral meaning in de Sade's writing is something to behold, as were his quick witted sayings so this is my compilation of 21 of the best Marquis de Sade quotes.

The French author Simone de Beauvoir got quite analytic: "To sympathize with Sade is to betray him. For it is our misery, subjection, and death that he desires; and every time we side with a child whose throat has been slit by a sex maniac, we take a stand against him. Nor does he forbid us to defend ourselves. He allows that a father may revenge or prevent, even by murder, the rape of his child. What he demands is that, in the struggle between irreconcilable existences, each one engage himself concretely. He approves of the vendetta, but not of the courts. We may kill, but we may not judge"

The philosopher Michel Onfray was blunt in his appraisal: "It is intellectually bizarre to make Sade a hero... Even according to his most hero-worshipping biographers, this man was a sexual delinquent"

The American social critic Camille Paglia declared: "Sade has barely made a dent on American academic consciousness. It is his violence far more than his sex which is so hard for liberals to accept. For Sade, sex is violence. Violence is the authentic spirit of mother nature.... 'Simply follow nature', Rousseau declares. Sade, laughing grimly, agrees"

The British novelist Colin Wilson mused: "What happened between the birth of De Sade and the birth of Krafft-Ebbing? The rise of the novel taught Europe to use its imagination. And when imagination was applied to sex, the result was the rise of pornography and of sexual perversion" 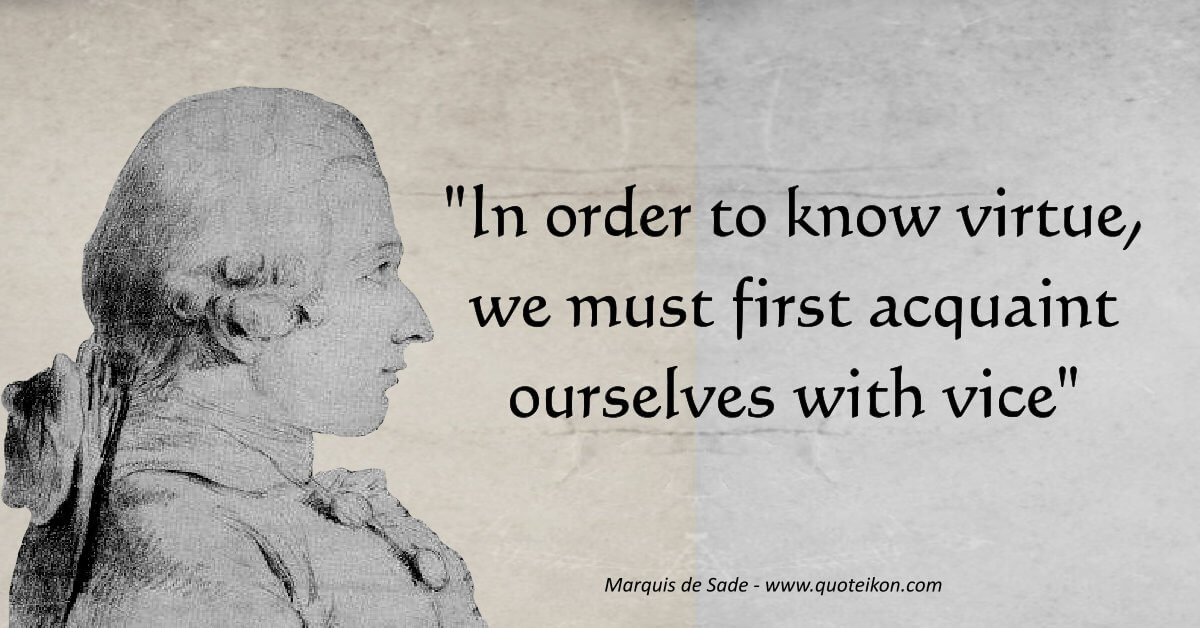