He was born in 1328 as a peasant. He was a destitute beggar, a famine survivor and a monk who experienced the worst hardships of the poorest people of his era. He was also a fighter, a warrior and a leader who rose up from raddled rags to command an empire and start the longest lasting dynasty in China's history. His name was Zhu Yuanzhang and he was the founder of the Ming Dynasty.

China is one of the four ancient civilisations that has survived to this day. Considering its recorded history of over 3,000 years, it has only produced two peasants who founded their own dynasty. The second was Zhu Yuanzhang who was preceded by 1,500 years by Liu Bang who founded the Han Dynasty to become the emperor of China in 202 BC. It could be argued that Mao Zedong should be added to this list, but although he ticked the box of peasant stock, his father became an affluent farmer and Mao did not create a line of succession within his family.

Zhu Yuanzhang was born to a Chinese peasant family who were mostly wiped out by famine. He was the youngest of seven siblings, his remaining brother advised him to become a monk leading Zhu to join a local monastery called the Huangjue Temple. Eventually the monks could not afford to feed Zhu because of plague and famine conditions so he left and wandered the countryside for three long years as a beggar.

Zhu remembered his time at the monastery fondly. It was here where he learned to read and write, he was also taught skills that were to prove very useful in later years such as the importance of organisation and logistics.

When he was twenty years old Zhu Yuanzhang made his way back to the Huangjue Temple. The famine was less severe so they accepted him back into the fold. Zhu stayed for four more years until a shock event changed his life forever.

China had been ruled by the Yuan Dynasty since 1271 when Kublai Khan, who was the fifth Khagan of the Mongol Empire, had ruthlessly overthrown the last remnants of the vanquished Song Dynasty. The Yuan Empire was the first foreign dynasty to rule over the proud people of China and they were deeply despised by the majority of non-collaborators to their regime.

The Yuan government had been beset with economic problems for decades. This in turn caused resentment. The authorities were consumed with putting down rebellions that were getting stronger and stronger in direct proportion to the unhappiness of the general populace.

When the Mongol clans of the Yuan Dynasty ransacked the monastery where Zhu Yuanzhang was staying he was both shocked and outraged. The warrior spirit in Zhu Yuanzhang was awoken and he was destined to cut a path through Oriental history that would reverberate through the coming centuries.

Zhu initially joined a local rebel group but his ambitions outgrew his comrades so he enlisted in the Zoroastrian Red Turban Army where he quickly rose through the ranks by displaying great bravery and leadership. Yuanzhang became the groups leader and he strategised to conquer all in his path including his first big target the city of Nanjing (then called Jingshi).

Having conquered Nanjing in 1356 he made it his base as he consolidated power around the Yangtze River. Zhu had more enemies to worry about than just the Mongol Yuan government. The Yangtze River valley was now free from Mongol rule, but there were other strong Chinese rebel groups in this region with their wanton eyes lusting to sit on the throne as emperor.

These powerful Chinese rivals had to be defeated before Zhu could concentrate, once and for all, on driving the Mongol clans completely out of China.

One of his main rivals was Chen Youliang. This was not just a pretender as he had already pronounced himself as a Han Emperor in 1360. Chen was aggressive. He had a powerful army and navy at his disposal but it was no match for the forces Zhu Yuanzhang unleashed at the battle of Poyang Lake in 1363. The forces of Chen Youliang launched a naval attack on Nanchang, which was controlled by Zhu, and he replied by sending fire ships into the fray of Poyang Lake.

The tactics Zhu employed were twofold. First he ordered his ships to get close and unleash a volley of fire bombs, fire arrows and various other incendiary devices to inflict scorching mayhem on the enemy. In the initial battle twenty Chen ships were burned to a cinder. Zhu resumed the battle by sending unmanned fire ships into the enemies armada and chasing down and sinking any ships that fled. After five days of fighting the fleet of Chen Youliang had been decimated and Chen was killed by an arrow that struck his head.

His next rival, or pretender to the title of emperor, was Zhang Shicheng who had established a stronghold in Suzhou and had a large army at his disposal. Zhu Yuanzhang first moved on the strategic city of Gaoyou which fell to his troops in April 1366. Following this Zhu lay siege to Suzhou for ten months until the city finally fell in October 1367. Zhang Shicheng was captured and brought back to Nanjing where he was quickly disposed of.

These two decisive victories were a watershed moment for all the minor warlords that were still active in China. They sensed the power of Zhu Yuanzhang and swore allegiance to his cause. The path to the heart of the Yuan Dynasty in Beijing (then called Dadu) was now clear. Zhu was now in command of a formidable fighting force that was chomping at the bit for battle, it was more than that, they longed to avenge the Mongol wrongs inflicted on the Chinese populace for nearly one century.

Before the march north to Beijing there was an important ceremonial act to complete in Nanjing. On 20th January 1368 Zhu Yuanzhang was proclaimed as the first emperor of the Ming Dynasty and he adopted the title for this new era as: "Hongwu".

With his ultimate goal of driving the Mongols out of China the armies of the newly crowned Ming Hongku Emperor marched north. They entered Beijing unopposed as the Mongols had retreated back to there homeland.

The surrender of Beijing was a humiliation from which the previously feared Mongols never recovered. By September 1368 the total collapse of the Yuan Dynasty was complete. The once fearsome Mongol hordes were cleared from northern China and the Ming reign was now unchallenged throughout the kingdom.

With power in his grasp and his own Dynasty firmly established, the Ming Hongwu Emperor went on to rule with an iron fist for the next 30 years until his demise in 1398.

Remembering his poor upbringing Zhu took measures to help the peasant communities. He cultivated land for distribution to the peasants, repaired canals and created many public works projects that benefitted the poorest of society. Zhu was responsible for the building of many rice terraces and in a bid to reduce the risk of famine he introduced the practice of crop rotation.

His positive economic policies built a strong economy from the grass roots level up that supported all. The feel good factor was back in China as the Hongwu Emperor had put into place solid foundations for a prosperous future. The Chinese economic expansion during the 15th and 16th centuries were due to the solid foundations of his fiscal policies.

Yuanzhang introduced laws reflecting traditional Chinese values and he set up a system where the elders of a community would be responsible for justice following his imperial edicts restraining officials from evil.

Zhu disliked corruption intensely and severely punished all such acts that rose to his attention. He was a good emperor who developed an autocratic government that relied on strength to enforce his strict governance. Rules were there to be obeyed and woe betide any transgressors as they would be severely punished. His rule balanced the paradox of fairness and harshness.

He set his own guideline of personal ethics which he stood by scrupulously. In the curious words of this Ming Hongwu Emperor he gave an insight to his thinking by saying: "In order to protect my reputation and to preserve my life, I have done away with music, beautiful girls and valuable objects. Those who love such things are usually a success in the morning, a failure in the evening".

Indeed it is a good analogy. The morning of the Ming Dynasty was as bright as a Shanghai sunrise under Zhu Yuanzhang's rule. His Ming descendants during the following three centuries slowly ascended into the twilight of an evening shadowed by weak ineffectual leaders and overthrow. It was a far cry from the ideals of its founder.

That the Ming Empire survived to be the longest lasting Chinese Dynasty was down to its founder Zhu Yuanzhang and the solid structure of governance he put in place.

Describing giants from history is never easy. But to say Zhu Yuanzhang was the pauper genius who mastered the art of war and governance as he carved his name into the annals of Chinese history would be a fitting tribute to one of greatest leaders of three millennia of the most powerful civilisation this planet has ever known.

He was as quick with his words as he was with his punishments so this is my compilation of 15 of the best Zhu Yuanzhang quotes.

Historian Patricia Buckley Ebrey was impressed to say: "Seldom has the course of Chinese history been influenced by a single personality as much as it was by the founder of the Ming Dynasty, Zhu Yuanzhang"

The writer Simon Leys was quoted as describing him thus: "an adventurer from peasant stock, poorly educated, a man of action, a bold and shrewd tactician, a visionary mind, in many respects a creative genius; Naturally coarse, cynical, and ruthless, he eventually showed symptoms of paranoia, bordering on psychopathy"

The artist Xie Jin made this observation: "Some in the morning are estimated [by the emperor] and in the evening they are executed"

Li Shanchang was his chancellor who advised Emperor Zhu to: "Build high walls, stock up rations, and don't be too quick to call yourself a king" 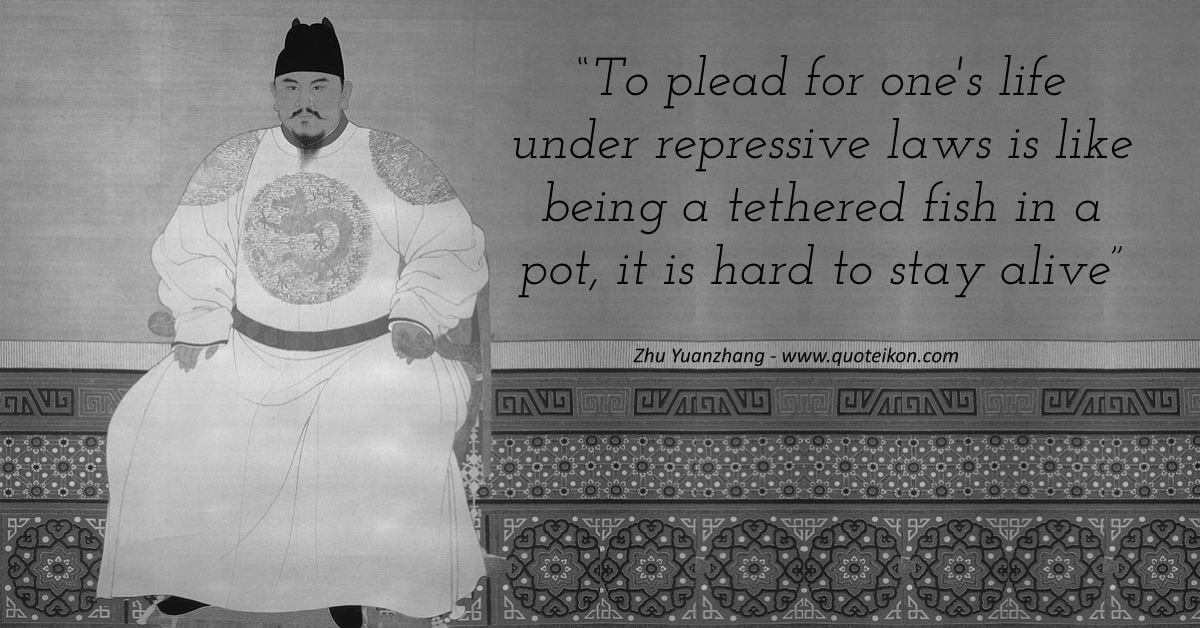