Pancho Villa was the revolutionary leader who was either loved or hated depending on which way the wind blew the Mexican allegiances vying for power during a turbulent period in the country's history.

In truth he was loved by the poor people who Villa was prepared to die for. The author Richard Grant was quoted as saying this about him; "Hated by thousands and loved by millions", and it was a fair assessment. After the revolution in which he fought and won many battles Mexico was entangled in power struggles and then civil war.

Villa rose again defeating armies in Northern Mexico and reallocating land to the poor and deserving. In 1920 Adolfo De la Huerta became interim president and wanted a peaceful Mexico so he offered Pancho a deal to retire and because he could also take care of his men he agreed.

Controversial stories followed Pancho Villa throughout his life and even his death was surrounded by controversy as he was assassinated in 1923 in the town of Parral, Chihuahua. Many rumours surfaced about who was responsible for his death but the most likely outcome was it was a politically motivated killing by the then incumbent president Alvaro Obregon he feared he might stand against him in the next election.

Although not educated when he spoke his words had meaning for millions of his fellow countrymen, so this is my compilation of 15 of the best Pancho Villa quotes

The Mexican poet Octavio Paz talked of his legend: "The brutality and uncouthness of many of the revolutionary leaders has not prevented them from becoming popular myths. Villa still gallops through the north, in songs and ballads; Zapata dies at every popular fair. … It is the Revolution, the magical word, the word that is going to change everything, that is going to bring us immense delight and a quick death"

Norman Walker described him in a 1923 edition of The El Paso Times: "Villa’s character was a peculiar complex. All the stories told of his lust were mostly imaginary. Villa’s greatest weakness was his uncontrollable temper. From a sane man, laughing and joking with his friends, Villa could turn into a maniac at a moment’s notice. His eyes would become blood-shot, he would pitch his voice several tones higher and he would pull his pistol and fire at the slightest provocation. All of the bloody deeds attributed to him were directly traceable to his temper, and Villa often admitted his weakness when talking of his career"

President Woodrow Wilson called him; "A sort of Robin Hood who had spent an eventful life robbing the rich in order to give to the poor. He had even at some point kept a butcher's shop for the purpose of distributing to the poor the proceeds of his innumerable cattle raids"

Leo Reynosa, who rode with Pancho Villa, said this in a 1988 interview: "We were fighting for a very just cause, however tumultuous or bloody"

The biographer Friedrich Katz wrote of his domestic life: "During his lifetime, Villa had never bothered with conventional arrangements in his family life"

A report from an officer in Venustiano Carranza's army is now part of Mexican folklore: "I have the duty to inform you that Pancho Villa is everywhere and nowhere at the same time" 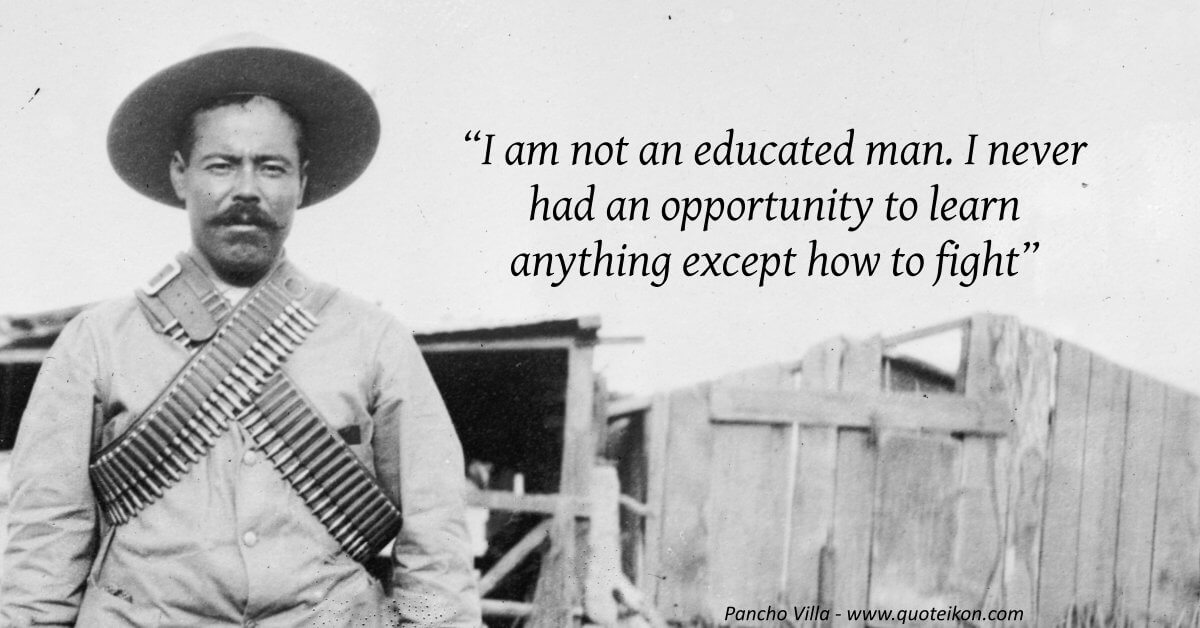