For nearly half a century Ho Chi Minh pursued his goal of a free and independent Vietnam which was achieved despite defying what seemed like insurmountable odds. He grew up under French colonial rule in a nationalist family that instilled the patriotic values that burnt the aspiration for freedom into his heart. There had been many insurrections against the French but every one failed with it looking an impossible task for this once proud nation with a previous history of nine centuries of independence.

Ho studied all the uprisings and he came to understand that each rebellion was fiery in its desire for liberty but rudderless in its aims and strategies. He knew that to overcome the colonialists the country needed a political cause that could unite the peasants and bring the whole country together as one. Ho had a desire to learn about the colonialists, he had to explode an illusion that they were superior so he took a job on board a ship and sailed to Europe where he met with illiterate British and French sailors that were just as backward as an uneducated peasant farmer.

He visited French colonies in Africa and saw the suffering of their peoples and he also visited America where he read their constitution and saw what the statue of liberty was supposed to represent. He knew he had to organise the Vietnamese to achieve their freedom and when the Russian revolution took place in 1917 his socialist leaning took a further turn left and he made his way to Moscow to gain an education that would be the basis for unifying the whole of Vietnam.

In Moscow he met Vladimir Lenin and Joseph Stalin and encouraged by their successes and advice he studied Lenin's thesis on National and Colonial Issues and continued his learning at the Communist University of the Toilers of the East. Building up his political relations with the Soviets was important but equally so was building up alliances with the communists in China who share a long border with Vietnam, so for the next 20 years he would spend most of his time in both these countries whilst still keeping close ties back in Vietnam.

In 1940 Ho slipped back into Vietnam for the first time in 30 years just as the Japanese had invaded and the French bowed down to them by trying to cut a deal. Ho sensed this was the opportunity he was waiting for and he quickly organised a coalition of communists and Vietnamese nationalists into a fighting group of nearly 10,000 that was called the Vietminh.

The key to his plan for independence was solving the peasant problem and the land problem and he successfully united the masses under this banner to overthrow the imperialists and feudalist land owners. Uniting the workers and the peasants by giving them a common goal that they could benefit from and clearly understood gave Ho Chi Minh his Vietnamese revolution and after his successes against the Japanese his beloved country became known as the Democratic Republic of Vietnam, and Ho Chi Minh became its first president. It was a major milestone but the battle was not yet over as the French still had designs on reestablishing their IndoChina colony and it was not until 1954 that they were finally defeated at the battle of Dien Bien Phu.

However with the Cold War heating up East/West tensions, the U.S. were not going to allow Ho Chi Minh's forces to take over the whole country so a partition was set up separating north and south Vietnam. Ho would not rest until the whole country was unified and a further 20 years of war and destruction had to pass before his Viet Cong troops finally drove the Americans out and full independence was achieved in 1976.

Although Ho Chi Minh did not live to see full independence it was his idealistic leadership that brought together a small nation of peasant farmers that had the spirit and tenacity to defeat the Japanese, the French and the biggest super power of them all the Americans.

After the fall of Saigon the city was renamed Ho Chi Minh city and his legacy lives on in the hopes and aspirations of all suppressed and colonised people around the world. Ho Chi Minh was a pragmatic and thoughtful leader, his strategic thinking aligned with his steadfast vision of a fully liberated Vietnam guided the revolution through the many challenges faced where his actions gained the peoples respect as the correspondence between his word and deed elevated his integrity and immortalised his name as the father of the revolution. His words of wisdom carried great meaning with the people and he was always good for a motivational one liner, so this is my compilation of 24 of the best Ho Chi Minh quotes

The pulitzer prize winning journalist Harry Askmore described him thus: "Ho was a courtly, urbane, highly sophisticated man with a gentle manner and without personal venom"

The award winning U.S. author David Brin somewhat begrudgingly said of him: "He remains the only enemy leader who ever defeated us at war, and then only because our hubris (not decadence) got the better of us"

The former President Dwight D. Eisenhower readily admitted whilst looking back from 1963 that: "It was generally conceded that had an election been held, Ho Chi Minh would have been elected Premier"

The poet and activist Martin Niemöller spoke highly of him: "One thing is clear, the president of North Vietnam is not a fanatic. He is a very strong and determined man, but capable of listening, something that is very rare in a person of his position"

The Soviet leader comrade Nikita Khrushchev was impressed to say: "I have met many people in the course of my political career, but none has made such a particular impression on me. Believers often talk of the Apostles. Well, through his way of living and his influence of his peers, Ho Chi Minh was exactly comparable to these holy apostles"

President Lyndon B. Johnson wrongly assumed his request for peace talks would be accepted when he arrogantly quipped: "Old Ho can't turn me down" 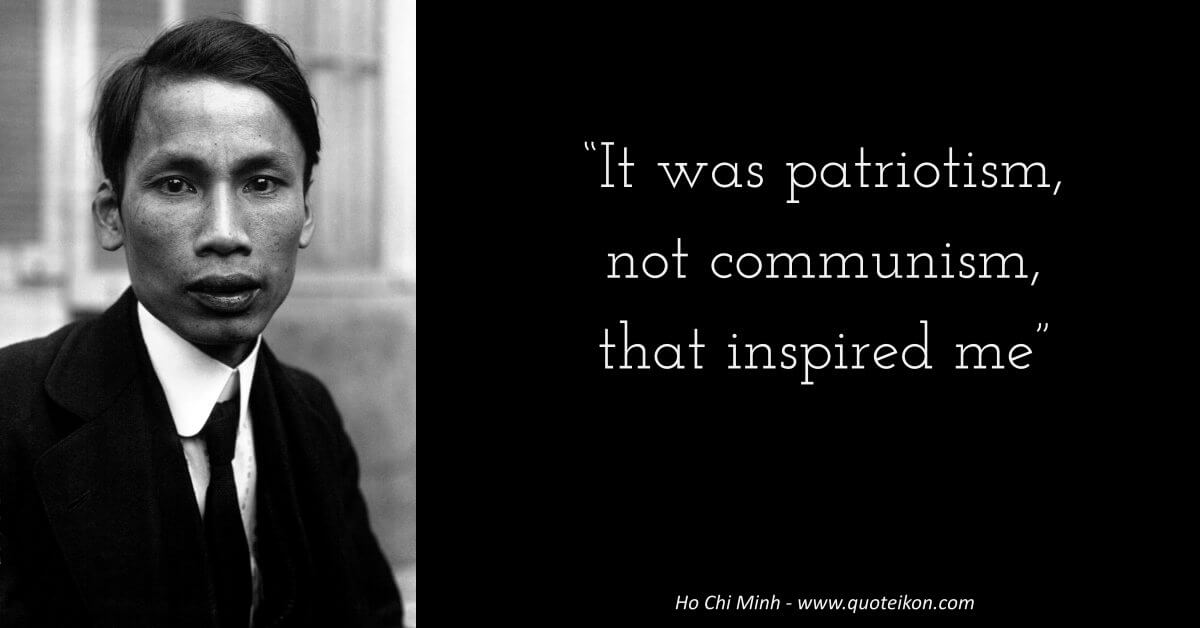