Imagine a man. A polymath whose aesthetical genius elevated him to being widely regarded as one of the greatest artists of all time. Now imagine a statue called David or Pietà. Then close your eyes and envision the éclat of excellence that is the Sistine Chapel. It was a man. Only one man whose expansive vision could imagine such creative beauty in his mind's eye where only the finest masterpiece would dare to aspire. His name was Michelangelo and he created a body of artwork on a scale so grand it has to be seen to be believed.

Michelangelo's era was an incomparable time in the history of art as he headed the triumvirate of artists that projected the Italian Renaissance period into artistic immortality. When your peers are Leonardo Da Vinci and Raphael the contention for brilliance raises the bar. Together they unleashed a phenomenal collection of masterpieces that created their own artistic niche called the Italian High Renaissance.

Michelangelo was a passionate artist with more than a touch of genius that occasionally made him difficult to work with and although he sometimes frustrated his patrons he rarely disappointed them. Genius is never flawed when it delivers the goods.

At the age of 13 he was apprenticed to the artist Domenico Ghirlandaio who taught him the techniques of Fresco and draftsmanship. He spent one year under Ghirlandaio's tutelage until the influential Lorenzo de' Medici took Michelangelo under his wing and allowed him to study sculpture under Bertoldo di Giovanni. It was here he was introduced to many famous artists of the day and could study the vast collection of classical art owned by the powerful Medici family.

Michelangelo worked for the Medici family until he was 21. His artistic star was now rising and Rome came calling. It was in 1496 when he created his first masterpiece the sculpture "Pieta" which is now housed in St. Peters in The Vatican. By 1504 he had garnered an ever impressive reputation as a sculptor but he was still growing as a creative artist as his next masterpiece the statue of "David" was to prove.

"David" was commissioned by the Opera del Duomo for the Cathedral of Florence. When finished it stood an imposing 17ft tall. This was an elegant example of the artists attention to detail when defining David's musculature in a natural but determined pose. The intricacy of the anatomical detail is considered to be a masterpiece of line and form. David has become one of the most replicated statues in history.

With his prowess as a sculptor now confirmed, Michelangelo changed track and took on a remarkable four year challenge to paint a 460 square metre fresco on the ceiling of the Sistine Chapel. Between 1508 and 1512 he lay on his back to portray The Book Of Genesis in such intricate detail it is now regarded as one of the most remarkable artworks of all time.

The artist has to imagine first, only then can their work materialise. When you explore the Sistine Chapel ceiling it is difficult to comprehend the input was solely from the brush of Michelangelo. It is a colossal masterpiece of art which can only be described as his chef-d'oeuvre. Not bad for the boy from Florence, the sculptor who showed the world how to paint the human form in a variety of poses, both clothed and nude.

The Florentine artist Giorgio Vasari recalled the scene at the opening of the Sistine Chapel: "The whole world came running when the vault was revealed, and the sight of it was enough to reduce them to stunned silence".

The Sistine Chapel propelled Michelangelo into the stratosphere of Italian artistic genius. He became regarded as the greatest artist of his generation and the centuries since have done little to diminish this deserved reputation despite the magnificence of his contemporaries.

Michelangelo became the inspiration for generations of budding artists eager to tap into the aesthetic grandeur of his style synthesising classical elegance with his Renaissance panache. Admirers queued long and hard to witness his brilliance. The Michelangelo influence can be seen in the works of Andrea del Sarto, Annibale Carracci, Correggio, El Greco, Paolo Veronese, Pontormo and Tintoretto. Even his contemporary Raphael was inspired by the splendour of the Sistene Chapel.

Michelangelo lived until he was 88. He received commissions from nine different Popes from Julius II to Pius IV. Considering he started his work for the Papacy in 1505 it is little wonder that his works of art can be seen at virtually every turn when touring the Vatican.

Today tourists flock to the Vatican and stare in awe at the beauty of St. Peters Basilica. They are appreciating the artistic adornment added by Michelangelo to the architectural design of the most sacred cathedral in Christendom. The dome of St Peter's became the inspiration for St Pauls Cathedral in London and the White House in Washington D.C.

Italy houses the bulk of his surviving works, mostly in the museums and churches of Florence, Rome and the Vatican. Michelangelo was also a poet who wrote in excess of 300 poems including many beautiful sonnets written for his great friend Vittoria Colonna who returned the compliment by writing some equally resplendent rhyme for his appreciation.

The artistic projection of his mind was unparalleled in his day and shone a light towards a new level of creative beauty forged in the imagination of the artist. Whether it was sculpture, painting, architecture or poetry Michelangelo excelled to an extraordinary level of artistry. Afterall, this was the man who said: "I saw the angel in the marble and carved until I set him free". You don't get more creative genius than that.

Pope Paul IV shared this assessment: "The biblical conception of a deus creator was unknown to antiquity, but only after the revival of classical art did it become possible for Christian art to give visual shape to the conception. This is Michelangelo’s achievement"

The author Dan Brown described him thus: "Today we know him as Michelangelo - a creative giant who is sometimes called the Medici’s greatest gift to humankind"

The painter Giorgio Vasari spoke with great admiration about The Sistine Chapel: "The work has proved a veritable beacon to our art, of inestimable benefit to all painters, restoring light to a world that for centuries had been plunged into darkness. Indeed, painters no longer need to seek for new inventions, novel attitudes, clothed figures, fresh ways of expression, different arrangements, or sublime subjects, for this work contains every perfection possible under those headings"

Giorgio Vasari went on to describe his painting of ‘The Last Judgement’ as: "The true Judgement and the true Damnation and Resurrection"

The author Johann Wolfgang Goethe spoke with astonishment: "Without having seen the Sistine Chapel one can form no appreciable idea of what one man is capable of achieving" 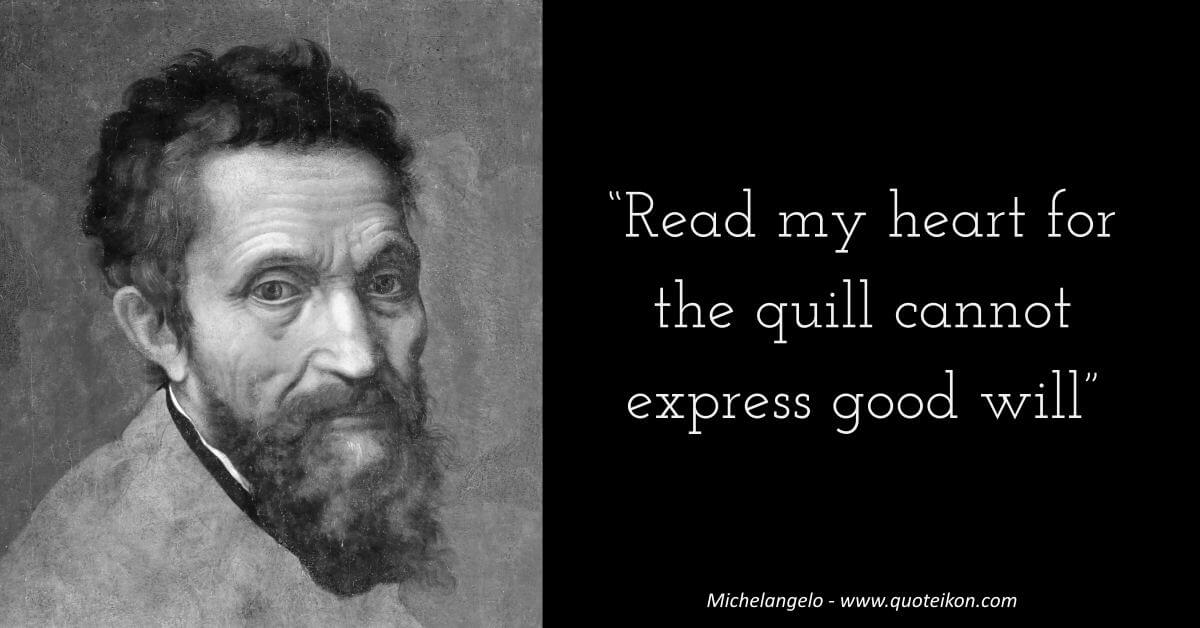