Martin Luther King Jr was the visionary leader of the American civil rights movement that recognised the forces of hate could only be driven out by non violent means or as he so eloquently put it "The Power Of Love".

From the mid 1950's until his untimely death in 1968 he fought fearlessly through non violent means for equality for the people of colour in America. Kings activism was not subject solely to the civil rights movement as he also campaigned strongly for the poor across the racial divide whereby he organised the 1968 march called The Poor People's Campaign.

King was also vehemently against the Vietnam war although he never really made it publicly known until 1967 when he delivered a civil rights speech entitled "Beyond Vietnam: A Time to Break Silence" where he equated the U.S. presence in S.E. Asia to a capitalist colonisation of Vietnam for profit without a concern for the welfare of the Vietnamese or the poor people of America where he thought the millions being spent on weaponry would be better served.

Martin Luther King Jr had a dream for all people to live happily in peace together and he dared to share that dream and paid the ultimate price for it with his life. His words have inspired generations with the passion and the deep meaning of his message living on for all to see and hear.

His dream is still intact and it sustains us yet, so this is my compilation of 23 of the best Martin Luther King Jr. quotes

Nelson Mandela paid a powerful tribute: "Let the strivings of us all, prove Martin Luther King Jr. to have been correct, when he said that humanity can no longer be tragically bound to the starless midnight of racism and war. Let the efforts of us all, prove that he was not a mere dreamer when he spoke of the beauty of genuine brotherhood and peace being more precious than diamonds or silver or gold. Let a new age dawn!"

The Chinese leader Mao Zedong did not hold back: "Martin Luther King was an exponent of nonviolence. Nevertheless, the U.S. imperialists did not on that account show any tolerance toward him, but used counter-revolutionary violence and killed him in cold blood"

The Indian spiritual leader Sri Chinmoy was impressed to say: "He was very pure in mind and heart. He was a lover: a lover not only of his race but a lover of all mankind. His heart was so broad, so great, so magnanimous, and this gave him a most sincere feeling of absolute oneness with everyone. This is what made him so divinely great"

The artist Benjamin Creme alluded to the power of special interests: "There are people who always want to get rid of anyone who is doing good for the world - like Martin Luther King, or President Kennedy; it always happens... he had a vision of right relationships for humanity"

The childrens rights activist Marian Wright Edelman hit home with a truth: "A lot of people are waiting for Martin Luther King or Mahatma Gandhi to come back — but they are gone. We are it. It is up to us. It is up to you"

Malcolm X said in a 1963 interview: "The white man pays Reverend Martin Luther King, subsidizes Reverend Martin Luther King, so that Reverend Martin Luther King can continue to teach the Negroes to be defenseless—that's what you mean by nonviolent—to be defenseless in the face of one of the most cruel beasts that have ever taken a people into captivity. That's the American white man. And they have proven it throughout the country by the police dogs and the police clubs. A hundred years ago they used to put on a white sheet and use a bloodhound against Negroes. Today they've taken off the white sheet and put on police uniforms, they've traded in the bloodhounds for police dogs, and they're still doing the same thing"

The civil rights activist Stokely Carmichael insinuated King's approach may have been too liberal: "Dr. King’s policy was, if you are nonviolent, if you suffer, your opponent will see your suffering and will be moved to change his heart. That’s very good. He only made one fallacious assumption. In order for nonviolence to work, your opponent must have a conscience. The United States has none" 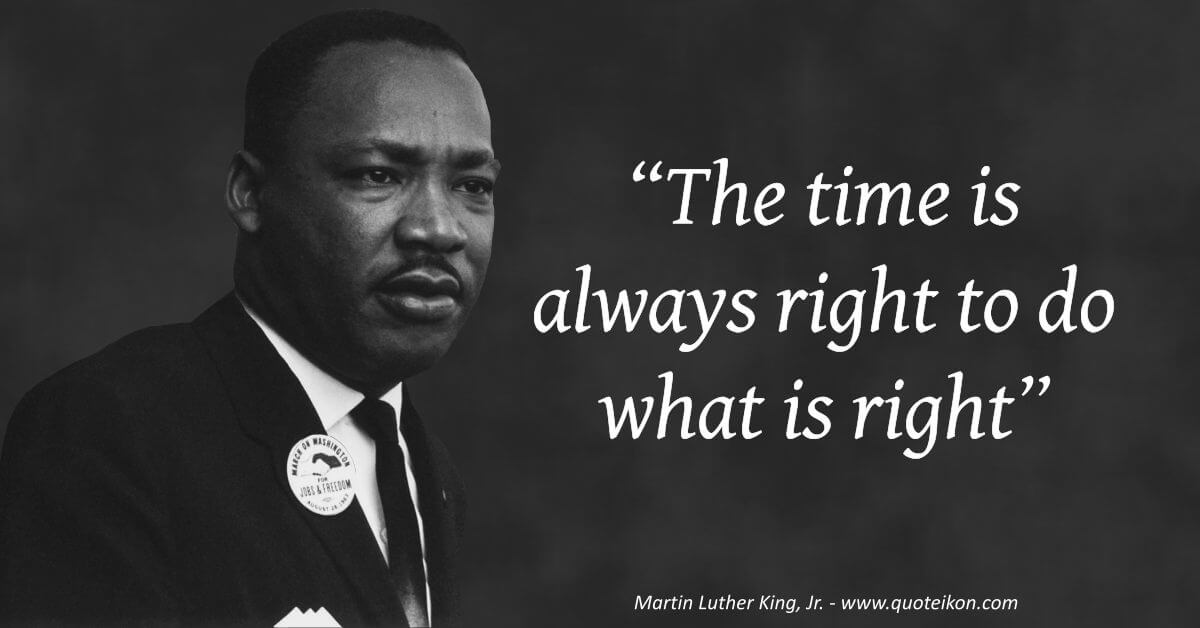