Few rock and roller's have influenced music like Little Richard, he schooled the Beatles on live performance and inspired Paul McCartney's singing style, Mick Jagger called him "the originator and my first idol" and he convinced David Bowie that he "heard god" when he first listened to "Tutti Frutti". Looking at the former band members who played with Little Richard is like a who's who of rock and soul with Billy Preston, James Brown, Jimi Hendrix, Joe Tex and Otis Redding all featuring before they gained their own musical success.

Coming from a poor background Richard was determined to make his mark in music, he had an energy he wanted to release and a powerful voice to deliver his act but he needed to capture the inspiration for his own style of music. His biggest influence came in the form of a flamboyant performer called Billy Wright who was part of the Atlanta Blues scene and was instrumental in inspiring Little Richard to be larger than life on stage, wear make up and style his hair in what would become his trademark pompadour style.

By 1951 Little Richard was based in Atlanta and started cutting his first records for RCA but sales were poor so in 1954, disillusioned with the record business, he took his band The Upsetters back to Macon Georgia, took a day time job and went back to live performances. Crucially, he kept the enthusiasm and sent a demo tape to Art Rupe of Specialty Records in Los Angeles who left it gathering dust for 12 months until finally getting time to listen and inviting Richard to a New Orleans studio to do some recording with the producer Robert Blackwell.

Rupe instructed Blackwell he was looking for an R&B singer in the mold of Ray Charles but Richard's early recordings were deemed not commercially viable leaving the singer frustrated as he could see this opportunity slipping away from him. During a break in recording they visited a night club and Little Richard stepped up to sing one of his own songs, Blackwell was mesmerised, the song he was listening to was Richard's first version of "Tutti Frutti" complete with some rather coarse lyrics that were a bit over the top to gain airplay. Blackwell sensed that this song could be a big hit and enlisted the lyricist Dorothy LaBostrie to tone down the wording and "Tutti Frutti" was recorded and released as a single in November 1955.

Tutti Frutti became a hit record that sold over million copies and his next single "Long Tall Sally" was quickly released in 1956 whereby it also hit the magic million mark of copies sold. Little Richard embarked on a series of impromptu concerts across the United States, but as his popularity grew, the established stars of the day started to cover his songs with Pat Boone especially active recording toned down versions of "Tutti Frutti" and "Long Tall Sally". White stars such as Pat Boone, Elvis Presley and Bill Haley recording black artists songs seemed just plain wrong as the original artists gained no financial reward for their creativity. However it did not take long for the fans of Boone and Co to find the original versions and inadvertently Little Richard was gaining a whole different set of followers who preferred the more down to earth original tracks. These days no one remembers Boone singing "Tutti Frutti" or "Long Tall Sally" as Little Richard's version has gained pride of place as the original and best renditions of these songs.

A string of hits followed including "Rip It Up", "Slippin’ and Slidin’", "Lucille", "The Girl Can’t Help It", "Jenny, Jenny" and "Good Golly, Miss Molly" and then the unthinkable, at the height of his fame in 1957 Little Richard found god and retired from rock and roll. This turned out to be a temporary withdrawal and by 1962 he was back in the studio with Quincy Jones and embarked on a tour of Europe where he had attained a large fan base.

He still had an audience eager for his classic rock hits so Little Richard toured for the next decade, there were record releases but not on the same scale as his 1950's success. He got into the rock and roll lifestyle of taking drugs and this took a toll on the singer who in 1977 once again retired from the music to reconcile wih god. There were more comebacks and career interruptions but every time he climbed back onto that stage there was a new generation of fans waiting to see the stalwart of rock and roll perform.

Little Richard was the original pelvic thrusting star of the fifties whose stage presence commanded your attention as he manically hammered his piano keys or strutted across the stage singing with an intensity that whipped the audience into a fervoured frenzy. This was showmanship in the fast lane as the real king of rock and roll gave his soul to a world that gladly accepted and churned out bands of the magnitude of The Beatles and The Rolling Stones to name but two.

He just as flamboyant off stage as he was strutting his stuff on it, he was never one to be shy with his words that made for some colourful one liners that I have used to compile this list of 25 of the best Little Richard quotes.

Quincy Jones was praiseful: "Little Richard was not only a giant but a pioneer of the so-called Rock 'n' Roll music industry. He had such a unique voice and style that no one else has matched it... Rock 'n' Soul is here to stay"

John Lennon was lost for words: "Elvis was bigger than religion in my life. Then this boy at school said he'd got this record by somebody called Little Richard who was better than Elvis. We used to go to this boys house after school and listen to Elvis on 78s: we'd buy five ciggies loose and some chips and go along. The new record was Little Richard's 'Long Tall Sally'. When I heard it, it was so great I couldn't speak"

Paul McCartney was inspired: "I never thought I'd ever meet Little Richard. He was my idol at school. The first song I ever sang in public was 'Long Tall Sally,' at a Butlins holiday camp talent competition! I love his voice and I always wanted to sing like him"

Mick Jagger was impressed to say: "I had heard so much about the audience reaction that I thought there must be some exaggeration. But it was all true. He drove the whole house into a complete frenzy. There's no single phrase to describe his hold on the audience. I couldn't believe the power of Little Richard on stage. He was amazing. Chuck Berry is my favorite, along with Bo (Diddley), but nobody could beat Little Richard's stage act. Little Richard is the originator and my first idol"

Keith Richards stood in awe: "The most exciting moment of my life was appearing on the same stage as Little Richard"

Jimi Hendrix made this ambitious comparison: "I want to do with my guitar what Little Richard does with his voice"

Lemmy recognised his arduous journey: "Little Richard was always my main man. How hard must it have been for him: gay, black and singing in the South? But his records are a joyous good time from beginning to end"

Wilson Pickett summed him up thus: "Little Richard is the Architect of Rock and Roll"

Etta James shared this anecdote: "He was the biggest of them all. And he knew it. ...he wanted everyone to call him 'King Richard'.... He had the biggest, flashiest and with all the best looking players. He also had the greatest parties in his hotel rooms. At least, that's what I was told. They wouldn't let me in, because I was underage"

Rod Stewart recalled his first rock influence: "The first Rock 'n' Roll record I listened to was 'The Girl Can't Help It,' by Little Richard"

Michael Jackson studied rock's history: "James Brown, Ray Charles, Jackie Wilson, Chuck Berry and Little Richard - I think they had strong influences on a lot of people, because these were the guys who really got rock'n'roll going. I like to start with the origin of things, because once it gets along it changes. It's so interesting to see how it really was in the beginning"

Otis Redding would never forget: "If it hadn't been for Little Richard, I would not be here. I entered the music business because of Richard - he is my inspiration. I used to sing like Little Richard, his Rock 'n' Roll stuff, you know. Richard has soul, too. My present music has a lot of him in it"

David Bowie on his sax and rock and roll initiation: "After hearing Little Richard on record, I bought a saxophone and came into the music business. Little Richard was my inspiration"

James Brown remembered him as: "First putting the funk in the rock and roll beat"

Chuck Berry hailed his creativity: "Little Richard is a great originator. He was right there at the start, a thrilling performer"

Jon Lord recognised his influence: "There would have been no Deep Purple if there had been no Little Richard"

Paul Simon shared school boy ambitions: "When I was in high school I wanted to be like Little Richard" 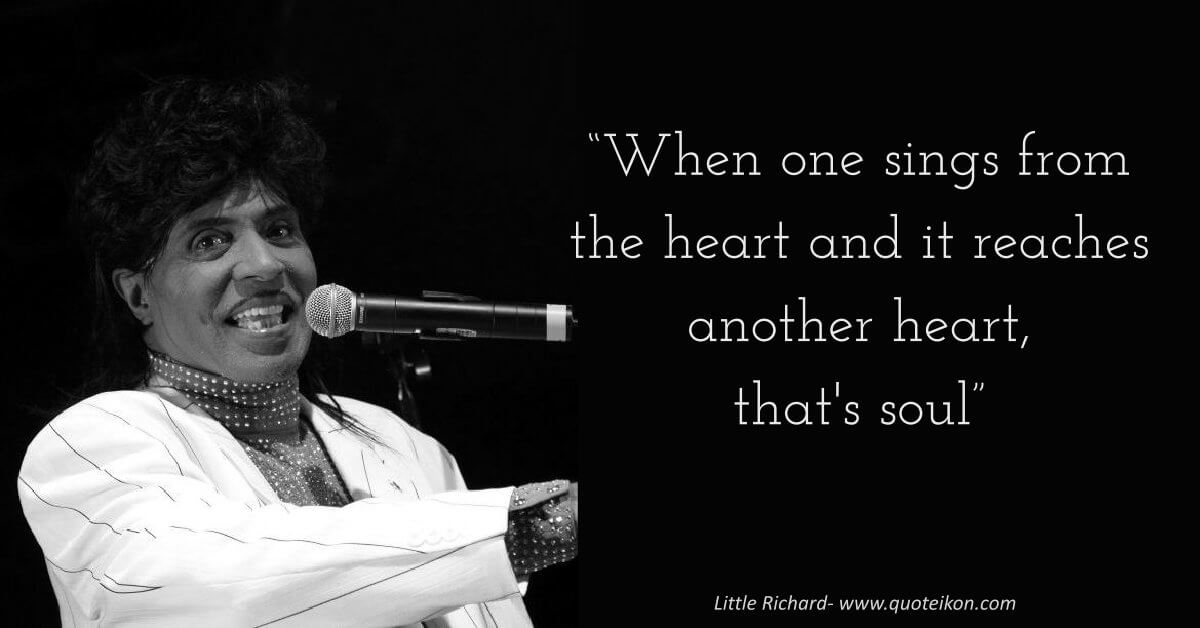