Audrey Hepburn was the award winning actress who strode confidently through Hollywood with an elegance and poise rarely seen in an era of voluptuous beauty demanded by the movie producers of the day. She never wore the airs and graces of a typical starlet as her humble grounding during four years of German occupation in the Adolf Hitler inspired World War 2 saw her witness first hand the daily injustices suffered by her family, friends and neighbours.

Hepburn's family were wealthy going into the war as she came from an aristocratic bloodline but soon realised wealth means nothing when you are starving and using crushed tulip bulbs to bake bread. She suffered malnutrition and saw arbitrary executions which also claimed the life of her uncle so once she emerged from the war it did not matter that her family's wealth and property had been destroyed because she realised the value of health and happiness. She spoke 5 languages fluently and her international upbringing in Belgium, Holland and England gave her a unique accent which added to the mystery surrounding the "new look" that she brought to the silver screen.

Audrey's first big role was the 1953 movie "Roman Holiday" for which she won the Best Actress Academy Award. Initially Elizabeth Taylor had been pencilled in to play the lead role but once the director William Wyler saw her screen test for Roman Holiday he was moved to say: "She had everything I was looking for: charm, innocence, and talent. She also was very funny. She was absolutely enchanting".

Following on from "Roman Holiday", Hepburn starred in the 1954 Billy Wilder romantic comedy "Sabrina" opposite Humphrey Bogart and William Holden who both vied for her affections on screen. "Sabrina" was also the movie where Ms Hepburn was first associated with the upcoming fashion designer Hubert de Givenchy who was hired to design her on screen outfits. Givenchy thought he hit the jackpot and was designing for the Academy Award winning actress Katharine Hepburn but once he met and dressed Audrey he was wowed by her charm and her beauty that led to both a lifelong professional relationship and a close personal friendship that endured.

Audrey Hepburn went on to a glittering award winning career in Hollywood with the highlight being her iconic portrayal of Holly Golightly in the 1961 epic romantic comedy "Breakfast At Tiffany's" where she posed and pouted in "that" little black dress carrying a larger than life cigarette holder with her carefully adjusted Oliver Goldsmith sunglasses and with her coiffure hairstyle she just purred with feminine style and sophistication.

The outfit she wore in the opening credits of Breakfast At Tiffany's became the most famous "little black dress" of all time and when it was sold at Christie's in London in 2006 it was bought for a staggering $923,187. It had been owned by Dominique Lapierre who donated the money to the charitable cause of building a school for the poor in Calcutta. Lapierre was visibly moved by the record breaking sale as he was quoted as saying: "I'm absolutely dumbfounded to believe that a piece of cloth which belonged to such a magical actress will now enable me to buy bricks and cement to put the most destitute children in the world into schools", Audrey would have been proud of such a generous gesture.

Although she was nominated five times for the Best Actress Academy Award she only collected that coveted Oscar once for her performance in "Roman Holiday", during her award winning career Ms Hepburn was also the proud winner of 2 Golden Globes, 1 Emmy, 1 Grammy and 3 Bafta's.

As one of the leading actresses of the golden years of Hollywood fame and fortune came her way but she donated much of it to charity. Her humanitarian work was her real passion and she recognised that it is more important to give than to receive as she gave the last four years of her life to helping the needy. As a role model she set a wonderful example of how to live your life and she was great for a piece of healthy advice or a quick quip, so here is my compilation of 21 of the best Audrey Hepburn quotes

Hubert De Givenchy enthused about his association when he said: "After Sabrina, Audrey requested my clothes for all her films with a contemporary setting, which is how I came to design the outfits she wore in Funny Face, Love in the Afternoon, Breakfast at Tiffany’s, Charade, Paris when it Sizzles and How to Steal a Million"

The fashion designer Ralph Lauren summed her up by saying: "You could take Audrey into Sears, Roebuck or Givenchy or an army surplus store – it didn’t matter, she’d put something on and you’d say, 'It’s her!' Very few people can do that"

Whereas the fashion author Jayne Sheridan pondered an interesting question: "Did Audrey Hepburn create Givenchy or was it the other way around?"

The composer Henry Mancini appreciated her talent: "Moon River was written for her. No one else had ever understood it so completely. There have been more than a thousand versions of 'Moon River', but hers is unquestionably the greatest" 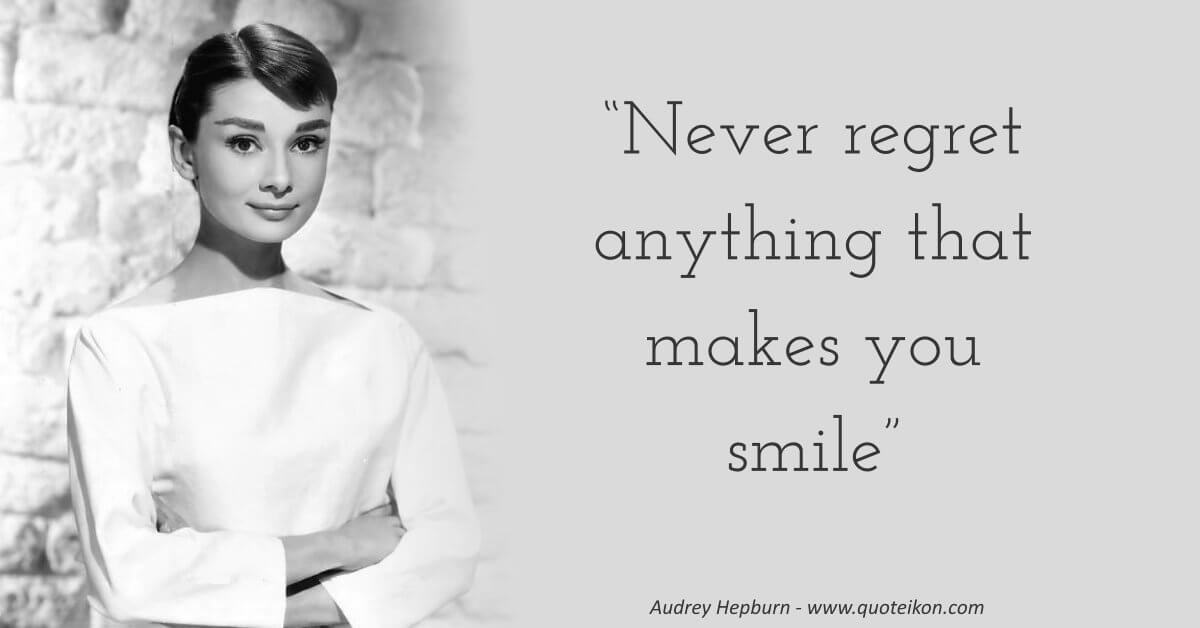