Thomas Jefferson was one of the founding fathers of the U.S. and he wrote his way into history by authoring the American Declaration Of Independence in 1776. In over fifty years of public service he gave his life to the independence and the betterment of the American people and he meant all of the people inclusive of the people of colour.

He was a man born way before his time who recognised the wrongs of slavery but was hamstrung by public opinion and was forced on many occasions to remove words from legislative attempts against slavery.

Many modern day Americans condemn him as being a hypocrite as he owned more than 600 slaves himself, but in an era when slavery and abuse towards people of colour was recognised as the norm Jefferson thought that his slaves, or his 'people' as he often referred to them, were better off under his wing where he would pay them respect and make sure they were properly cared for.

Even the abolitionist and social reformer Frederick Douglass, himself a former slave, was quoted as saying of him: "Jefferson was not ashamed to call the black man his brother and to address him as a gentleman". The democracy he helped to create in America had further challenges which he continued to address with political, religious and press freedom always on his radar throughout his years of public service.

With the Virginia Statute for Religious Freedom he lay the cornerstone for religious tolerance. He recognised that educational opportunities must be expanded for all and spent years advocating this policy and being a man that liked to practice what he preached he is also known as the Father of the University of Virginia.

Jefferson was invited to attend in Washington the fiftieth anniversary of American independence but due to ill health he declined the offer and died on the very day they were celebrating the golden anniversary of American freedom. He did send them one last poignant message with the words: "All eyes are opened, or opening, to the rights of man".

Great statesmen like Jefferson orate great speeches and their words are always quotable for deep meaning behind each chosen phrase, he was no different so this is my compilation of 20 of the best Thomas Jefferson quotes

Historian Dumas Malone made this observation: "Jefferson was kind to his servants to the point of indulgence, and within the framework of an institution he disliked he saw that they were well provided for. His ‘people’ were devoted to him"

Abraham Lincoln was impressed to say: "All honor to Jefferson to the man, who, in the concrete pressure of a struggle for national independence by a single people, had the coolness, forecast, and capacity to introduce into a mere revolutionary an abstract truth, applicable to all men and all time, and so to embalm it there to-day and in all coming days it shall be a rebuke and a stumbling block to the very harbingers of reappearing tyranny and oppression"

Martin Luther King Jr. looked back with a critical eye: "If we look at our history with honesty and clarity we will be forced to admit that our Federal form of government has been, from the day of its birth, weakened in its integrity, confused and confounded in its direction, by the unresolved race question. We seldom take note or give adequate significance to the fact that Thomas Jefferson’s text of the Declaration of Independence was revised by the Continental Congress to eliminate a justifiable attack on King George for encouraging slave trade…Jefferson knew that such compromises with principle struck at the heart of the nation’s security and integrity"

President John F. Kennedy made this tongue in cheek assessment at a 1962 White House dinner honouring Nobel Prize winners: "I think this is the most extraordinary collection of talent, of human knowledge, that has ever been gathered together at the White House, with the possible exception of when Thomas Jefferson dined alone" 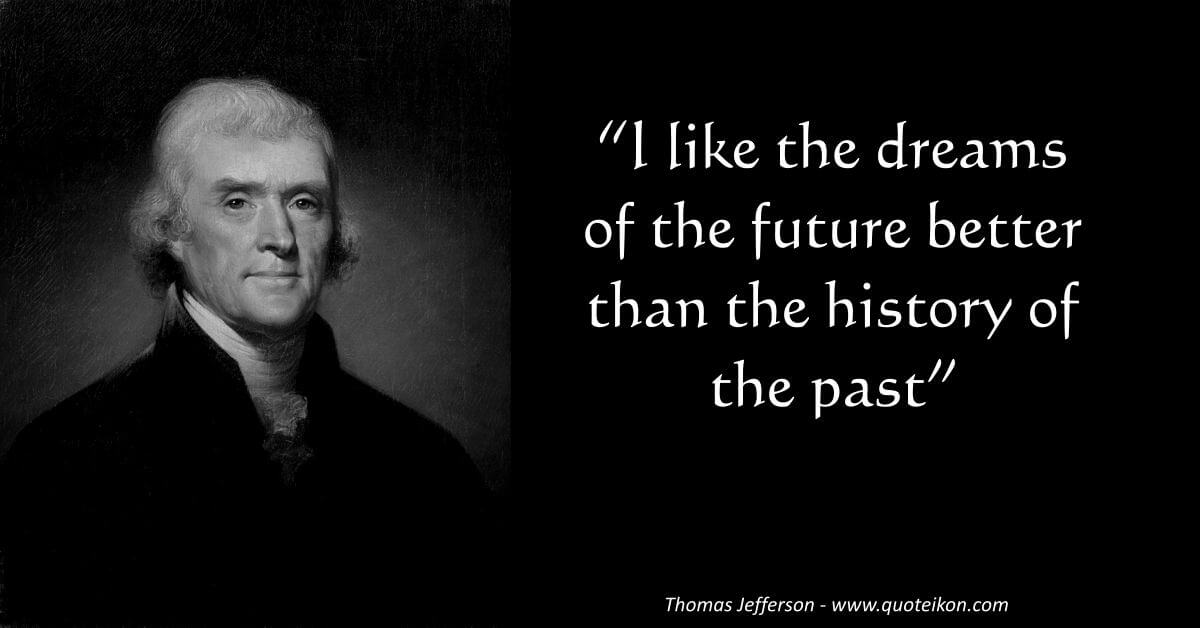