From Russia to controversy, the legacy of Ayn Rand of one of the classic marmite writer whose cynical views create division, derision or adoration depending on the view of the reader.

She was opposed to collectivism, communism, religion and socialism. Rand viewed altruism as a form of self-denial that is incompatible with free markets and individual rights. Her views on objectivism considered the logic of rational selfishness that favoured individualism. She gave meaning to a man creating his own happiness through his own productive efforts.

Her unwavering ethical vision of rational self-interest set a societal tone for an adoption of moral virtues to mould tunnel visioned individuals who then habitually look after their own interests without the inclination to help others or allow others to help them.

To some, objectivism seems a reversion to the basic human instincts that has kept the species alive for millions of years, hunt, gather and look after number one. The other side of that coin is collectivism encouraged teamwork, the sharing of resources and wholesale mercantile trade that benefited the majority. It is easy rationalise one philosophy as superior to the other but quite another to put that belief system into practice as the revisionism of the theories of Karl Marx can testify.

The historian Ludwig von Mises paid her an enormous compliment with this meaningful description: "The most courageous man in America"

The writer Whittaker Chambers conveyed his thoughts of gallows humour: "From almost any page of Atlas Shrugged, a voice can be heard ... commanding: 'To a gas chamber-go!'"

The economist Friedrich Hayek provoked a response: "We had a very brief exchange. She swelled in anger and spun away, remaining only long enough to say, ‘You are a compromiser’."

The author Chris Matthew Sciabarra described her thus: "Her works had inspired passionate responses that echo the uncompromising nature of her moral vision"

The journalist Nick Gillespie describes her legacy: "Rand's is a tortured immortality, one in which she's as likely to be a punch line as a protagonist. Jibes at Rand as cold and inhuman run through the popular culture"

The philosopher Tibor Machan was impressed to say: "From the initial outline Ayn Rand provided, a very rich and powerful philosophy emerges – e.g., it solves such problems as science versus free will and moral responsibility, knowledge versus the fact of fallibility. Merely because Rand's ideas were not born in academe or developed in full detail by her, it cannot be concluded that they are unsound"

The Australian satirist Clive James shared this critique: "There have even been outright bad writers blessed by the visitation of a poetic title. Ayn Rand had one with The Fountainhead, and another with Atlas Shrugged: a bit of a mouthful, but nobody has ever spat it out without first being fascinated with what it felt like to chew"

The businessman John Mackey shared this opinion: "I think that in some ways the libertarian movement - possibly due to the combined influence of Ayn Rand and many economists - has gotten to a kind of ideological dead end that I don't think does justice to business or capitalism or human nature"

The writer Jesse Larner was torn to say: "Like her other works of fiction and nonfiction, the book Atlas Shrugged manages to be both deeply sinister and deeply ridiculous, which isn't so easy to do"

An Objectivist scholar, John David Lewis was impressed to declare: "Rand wrote the most intellectually challenging fiction of her generation"

The clinical psychologist Bruce E. Levine shared this assessment of her legacy: "Ayn Rand helped make the United States into one of the most uncaring nations in the industrialized world, a neo-Dickensian society where healthcare is only for those who can afford it, and where young people are coerced into huge student-loan debt that cannot be discharged in bankruptcy"

Bruce E. Levine went on to say: "While Harriet Beecher Stowe shamed Americans about the United States' dehumanization of African Americans and slavery, Ayn Rand removed Americans' guilt for being selfish and uncaring about anyone except themselves"

The philosopher Greg Nyquist offered this opinion: "Rand tended to believe that questions of fact could be determined by the manipulation of vague terms"

The journalist Brian Doherty was a fan: "the most influential libertarian of the twentieth century to the public at large"

The author Adam Weiner talked of her influence: "Rand had effectively chucked a ticking time bomb into the boiler room of the US economy"

The biographer Jennifer Burns shared this observation: "In moments of liberal dominance, people turn to her because they see Atlas Shrugged as a prophecy as to what’s going to happen if the government is given too much power"

The author William F. Buckley Jr was not so impressed: "Her novel Atlas Shrugged... a thousand pages of ideological fabulism. I had to flog myself to read it"

It is fair to say Gore Vidal was not a fan: "For to justify and extol human greed and egotism is to my mind not only immoral, but evil"

Donald Trump was impressed to say about The Fountainhead: “It relates to business, beauty, life and inner emotions. That book relates to ... everything"

The journalist Jonathan Freedland summed her up thus: "Rand was Gordon Gekko with A-levels"

Historian Jennifer Burns recognised the political attraction: "the ultimate gateway drug to life on the right"

Jennifer Burns went on to state: "For a long time, she has been beloved by disruptors, entrepreneurs, venture capitalists, people who see themselves as shaping the future, taking risky bets, moving out in front of everyone else, relying only on their own instincts, intuition and knowledge, and going against the grain

The CIA director Mike Pompeo commented that Atlas Shrugged: "really had an impact on me"

The writer Johann Hari shared this appraisal: "Rand was broken by the Bolsheviks as a girl, and she never left their bootprint behind. She believed her philosophy was Bolshevism's opposite, when in reality it was its twin. Both she and the Soviets insisted a small revolutionary elite in possession of absolute rationality must seize power and impose its vision on a malleable, imbecilic mass. The only difference was that Lenin thought the parasites to be stomped on were the rich, while Rand thought they were the poor"

The journalist Corey Robin made this comparison: "St. Petersburg in revolt gave us Vladimir Nabokov, Isaiah Berlin and Ayn Rand. The first was a novelist, the second a philosopher. The third was neither but thought she was both. Many other people have thought so too"

Jack Wheeler described her ethics as: "a most immense achievement, the study of which is vastly more fruitful than any other in contemporary thought"

The philosopher Sam Harris shared this view: "Objectivism - a view that makes a religious fetish of selfishness and disposes of altruism and compassion as character flaws. If nothing else, this approach to ethics was a triumph of marketing, as Objectivism is basically autism rebranded. And Rand's attempt to make literature out of this awful philosophy produced some commensurately terrible writing" 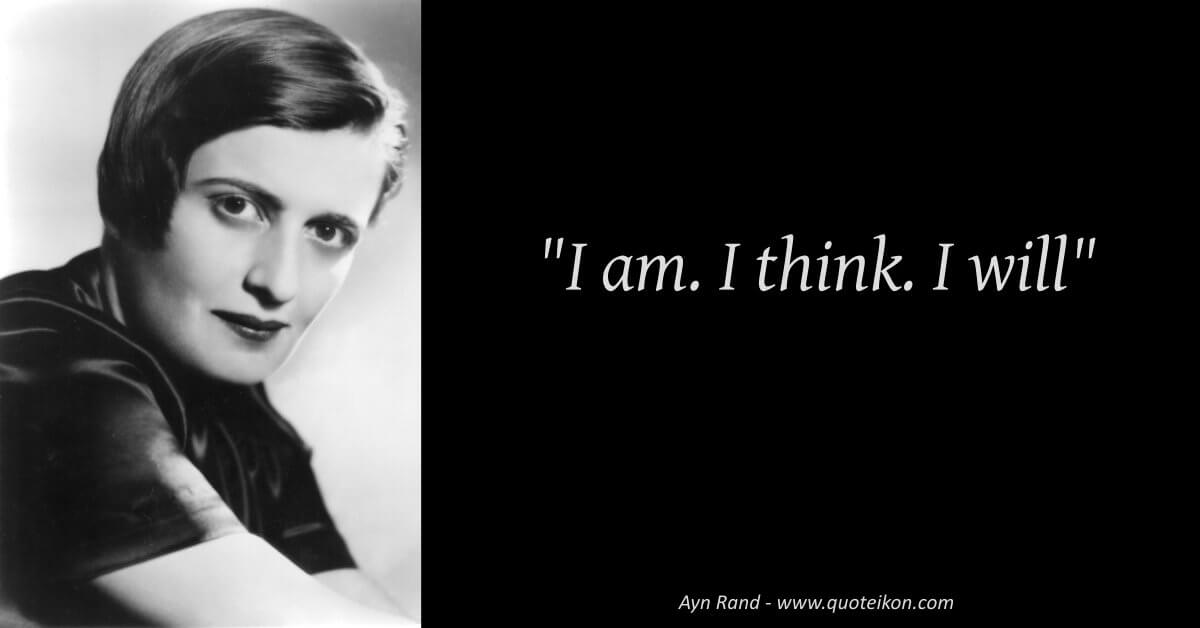