Ambrose Burnside was born the fourth of nine siblings in Liberty Indiana in 1824.

After showing an interest in the army he joined he joined the U.S military academy in 1843 and after four enduring years he graduated in 1847.

Burnside had minimal involvement in the Mexican American war but in the American civil war he was to see a lot of acion. He had some early successes including his North Carolina expedition which saw him gain a promotion with more troops under his command. His reputation was further enhanced in the battle of Antietam after little support his men still managed to take some credit in what were hectic and unpredictable battles due to a lack of coordination.

The Battle of Fredericksburg saw Burnside receive a military comeuppance when Confederate general Robert E. Lee and his army gained a major victory and a psychological boost with more than 13,000 union soldiers killed on the battle field.

The Knoxville campaign saw another turn in the fortunes of war for Ambrose Burnside when his men won a number of both skirmishes and races against the confederate forces under James Longstreet. Burnsides objective was to hold Knoxville and he successfully achieved this with military aplomb.

Ambrose Burnside achieved a few more minor successes before the Battle of the Crater became his final military undoing resulting in severe Union soldier casualties. He was relieved of his post and this was to prove his final commanding role of the civil war.

After the war Burnside found a new battle field in the political arena and was elected governor of Rhode Island. He served three years as governor. He died of heart disease in 1881 and is interred at Swan Point Cemetery, Providence, Rhode Island.

Military mismanagement aside, he is fondly remembered for his facial whiskers and his name was inverted to coin the phrase 'sideburns' given to facial hair growing from the side of the ears to the moustache, he was good for a quick quip also so this is my compilation of 16 of the best Ambrose Burnside quotes.

General Ulysses S. Grant said this to the Committee on the Conduct of the War: "General Burnside wanted to put his colored division in front, and I believe if he had done so it would have been a success. Still I agreed with General Meade as to his objections to that plan. General Meade said that if we put the colored troops in front, we had only one division, and it should prove a failure, it would then be said and very properly, that we were shoving these people ahead to get killed because we did not care anything about them. But that could not be said if we put white troops in front."

The historian Bruce Catton shared this observation: "Burnside never mistook himself for Napoleon. Physically he was impressive: tall, just a little stout, wearing what was probably the most artistic and awe-inspiring set of whiskers in all that bewhiskered Army. He customarily wore a high, bell-crowned felt hat with the brim turned down and a double-breasted, knee-length frock coat, belted at the waist—a costume which, unfortunately, is apt to strike the modern eye as being very much like that of a beefy city cop of the 1880s."

The author Jeffry D. Wert gave this assessment: "He had been the most unfortunate commander of the Army, a general who had been cursed by succeeding its most popular leader and a man who believed he was unfit for the post. His tenure had been marked by bitter animosity among his subordinates and a fearful, if not needless, sacrifice of life. A firm patriot, he lacked the power of personality and will to direct recalcitrant generals. He had been willing to fight the enemy, but the terrible slope before Marye's Heights stands as his legacy." 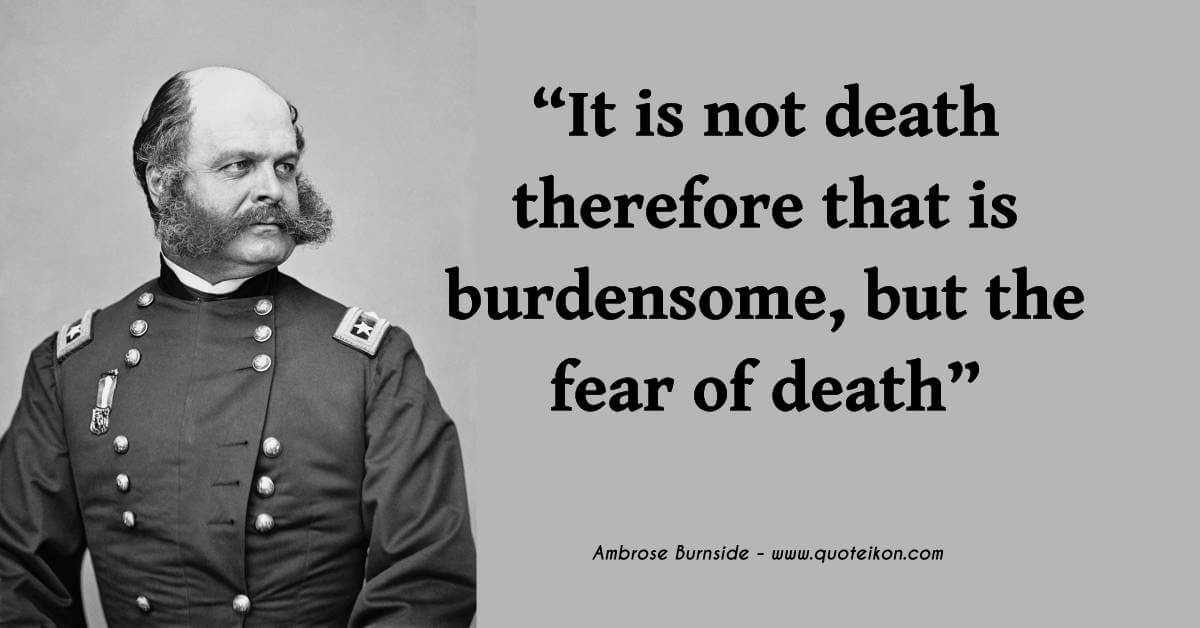