The academics at West Point would barely have batted an eyelid at the graduation of Ulysses S. Grant in 1843 and would have called you stark raving mad if you suggested this was the future commanding general of the U.S. army. Little did they know about the true soldier inside Grant and sometimes it takes the theatre of war for the real leaders to stand up and be counted.

The only remarkable thing West Point ever gave Grant was his newly adopted name Ulysses S. Grant and that was an administrative error he kept with him for the remainder of his life.

Grant first saw action in the American Mexican war and straight away he was receiving commendations for both bravery and tactical awareness in the heat of battle and quickly achieved promotion to Captain. Although he carried out his duties professionally he was deeply opposed to the rationale behind what he called an unjust war and was later to state that the American Civil War was the karma for the U.S. transgressions in Mexico.

Ulysses was also opposed to slavery and being a civilian by the time the civil war broke out he quickly reenlisted and it was a decision that helped shape the course of the war. Under his command the Union army won their first big battle of the war after taking Fort Donelson on the Cumberland river and capturing 12,000 enemy troops in an unconditional surrender. This was with a volunteer army and against the orders of his military commander who ordered him not to engage and subsequently complained to Washington about his actions.

President Abraham Lincoln cared only about the result and Grant was someone who he recognised 'could get the job done' so against the professional military advice he promoted him to major general of volunteers while the free press of the north lauded Grant as a Union hero.

Battle after battle Grant won and despite begrudging resonance from the army hierarchy he was again promoted by Lincoln to major general in the professional army. By March 1864 Lincoln was again rewarding Grant with another promotion this time to Lieutenant general commanding all Union armies and answerable only to Lincoln himself.

The next stage of the war proved bloody and gruesome with both sides suffering heavy losses which the confederates could ill afford as replacements were not easy to come by. Grant wore down the confederates and their eventual surrender was inevitable.

Grants war efforts gained him the respect of a nation and he was to become a two term president of the United States of America. After his Presidential reign was over Ulysses wrote his memoirs and his long time friend Mark Twain published them on his behalf.

Ulysses S. Grant was an honourable man who was more soldier than politician, he was a dignified leader of men who sometimes spoke bluntly but never with ill intent and although his presidential term was marred by corrupt officials his integrity and honesty were never subject to questioning. His efforts to help African Americans eclipsed all presidents of the nineteenth century but ultimately his policies were before their time because as abolishing slavery had been accepted the mindset of much of the country was still content with segregation and discrimination which left a gulf between the true freedoms every person should be born to despite their race or skin colour.

He did as much as any man did to end slavery. Then he tried to enforce equal rights for citizens of colour, but he found he could not succeed in the latter. Another century would pass before equal rights would be observed for all shades of skin under the southern sun.

The historian Stephen E. Ambrose summed up as much when he said: "For those of us who lived in the American south from World War II to the 1980s, we can only say how right Grant was... He was a great American who did far more good for our country than most generals or presidents can even approach." Indeed he did. A commanding general in his day and a President of high repute before his time.

President Abraham Lincoln recognised his abilities to get the job done: "Grant is the first general I have had. You know how it's been with all the rest. As soon as I put a man in command of the army, they all wanted me to be the general. Now it isn't so with Grant. He hasn't told me what his plans are. I don't know and I don't want to know. I am glad to find a man who can go ahead without me. He doesn't ask impossibilities of me, and he's the first general I've had that didn't"

The author Roy K. Lintz placed him here in history: "Grant was in the first rank of American heroes, alongside Washington and Lincoln"

The soldier and politician Theodore Lyman described him thus: "He is the concentration of all that is American"

President Theodore Roosevelt was praiseful of the work ethic of two great men: "Our debt is yet greater to the men whose highest type is to be found in a statesman like Lincoln, a soldier like Grant. They showed by their lives that they recognized the law of work, the law of strife; they toiled to win a competence for themselves and those dependent upon them; but they recognized that there were yet other and even loftier duties - duties to the nation"

The author Mark Twain paid this wonderful compliment to his character: "I mentioned Grant's loyalty – remember Harrison, his colored body servant? The whole family hated him, but that did not make any difference, the General always stood at his back, wouldn't allow him to be scolded; always excused his failures and deficiencies with the one unvarying formula, 'We are responsible for these things in his race. It is not fair to visit our fault upon them, let him alone'. ... he was the most lovable great child of the world" 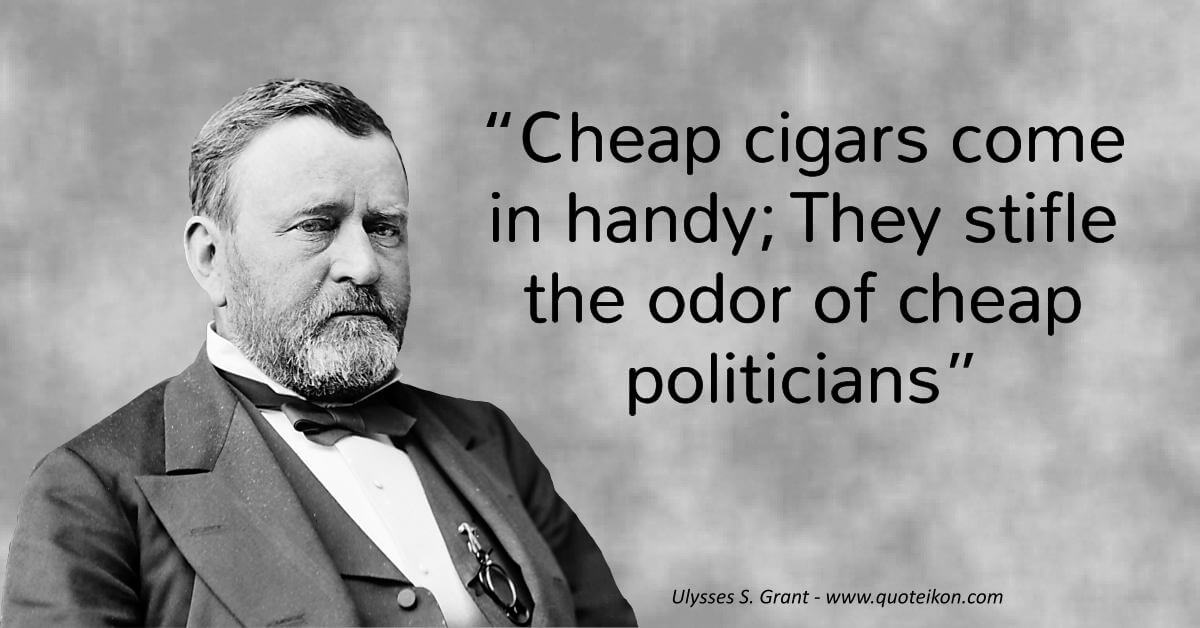