Wallis Simpson was at the heart of what has been described by some as the romance of the century and by critics as the Jezebel who nearly brought down the English monarchy and caused the King of England Edward VIII to abdicate his throne so he could marry the woman who he claimed he could not bear to be apart from.

Hacks and historians have covered this affair in intricate details with facts and figures that if one was to digest everything that has ever been written it would probably take a life time to read, such has been the intense interest and voluminous output of every so called expert with an opinion on the subject.

It could be said that the marriage was one of convenience because they both desperately were seeking to gain something from tying the knot. To Edward it was the possibility that marriage to a twice betrothed commoner could cause a constitutional crisis from which he could escape the role of being king as he hated the royal responsibilities of state duty expected of him. For Wallis Simpson however she had her eyes set on being queen and saw it as the ultimate peak of her social ascendency.

So they needed each other, albeit for different reasons and when Edward announced his abdication Wallis called him a fool, but such was the uproar the scandal caused she was destined to enter into a marriage from which there was no escape. The hate generated for being the cause of the abdication was bad enough but if she were to leave Edward after all he had sacrificed for her she would have been shunned and ostracised in every corner of the globe.

So she chose to stay married as the most convenient solution in a conundrum entirely of her own making. The marriage of convenience seems to be the generally accepted theory but the fact remains they did stay together for the remainder of their lives. If Wallis Simpson was as calculating as she is often made out to be then she would have grinned and bared it for a few years and then divorced Edward after the dust had somewhat settled to try to live the life that she really wanted.

The press at the time of the affair and abdication would not leave Wallis and Edward alone and they created stories that were repeated so many times they became, in the eyes of the world, facts. Edward and Wallis had no choice but to maintain a dignified silence as engaging the tabloids would just have intensified the spotlight on them.

In a world of cynical headlines where sleaze sells it can be challenging to find the true story and I believe the propaganda machines won the battle of their truth but lost sight of the love of Edward and Wallis.

The real marriage of convenience in this story is between the 'hacks and historians' to the 'establishments will' as the marriage between Edward Windsor and Wallis Simpson truly was the romance of the century as they stayed together for life, much to the chagrin of the establishments pet poodle called the media. Historical theories aside this is my list of 14 of the best Wallis Simpson quotes.

One year after the death of the Duchess part of her jewellery collection was sold for a then record of $33,507,131 at a Sotheby's auction. The beneficiaries of this auction was a Paris medical research centre called the Pasteur Institute, as was willed by the duchess before her passing

Winston Churchill worked tirelessly behind the scenes to find a solution: "My main difference with the Government has consisted in the fact that I regarded abdication as a far greater disaster than they did, and I would have put up with the disadvantages and dangers of a prolongation of the controversy within moderate time limits"

About the abdication King Edward VIII simply said: "I have found it impossible to carry the heavy burden of responsibility and to discharge my duties as king as I would wish to do without the help and support of the woman I love"

Edward added: "Do you really think that I would be crowned without Wallis by my side?"

Winston Churchill in defending the king said: "The king should be allowed to marry his Cutie"

The playwright Noel Coward responded drolly: "England does not wish for a Queen Cutie"

Lady Alexandra Naldera Metcalfe described the relationship thus: "The effect is of an older woman unmoved by the infatuated love of a younger man" 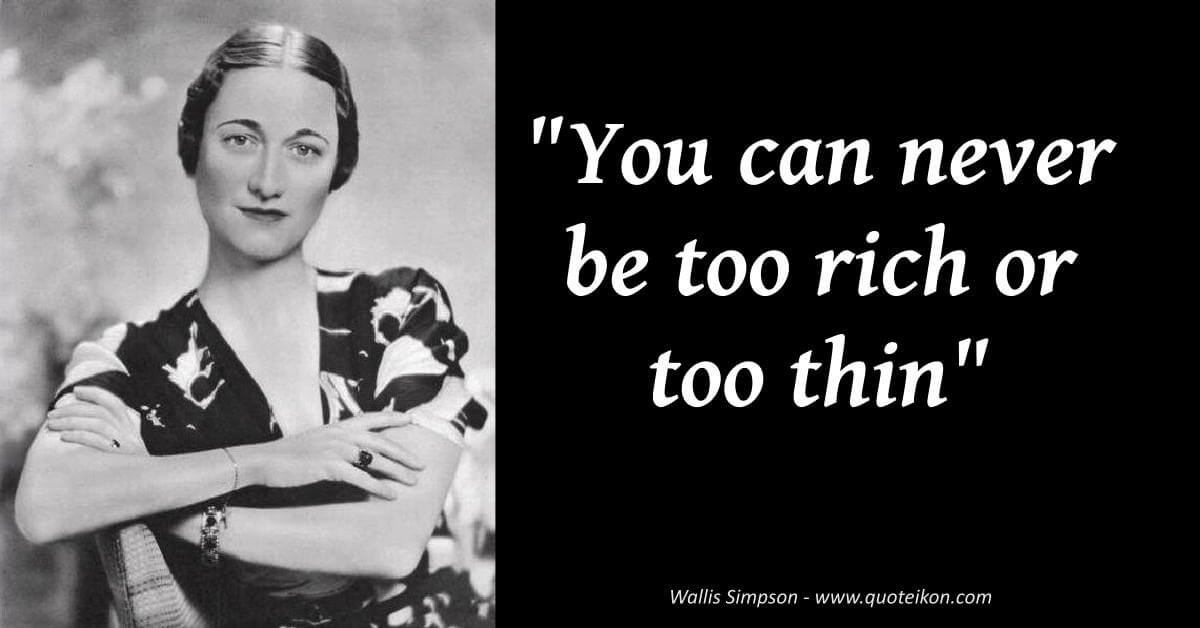