Louis Pasteur experimented his way into the annals of scientific history with his germ theory research that led to his discovery of vaccines and processes such as pasteurisation that have been responsible for saving millions of lives.

Born to a family of tanners, Pasteur's father who had fought in Europe for Napoleon Bonaparte, wanted a better life for Louis, he wanted him to receive a good education and encouraged him to enter the École Normale Supérieure where he worked hard to earn his master’s degree in 1845 and in 1847 he gained a doctorate for his work on molecular asymmetry whereby he demonstrated molecular chirality and was credited with the first explanation of isomerism.

His work earned him a position as professor of chemistry at Strasbourg University and Louis was to embark on a life changing journey where he met and married Marie Laurent who bore him five children three of whom died of typhoid before reaching adulthood, this had a devastating effect on the family and gave Pasteur a grief inspired ambition to use his science to help mankind.

In 1854 Pasteur left Strasbourg taking the lofty position of Dean of the Faculty of Sciences at Lille University, it was at Lille that one of his students asked his opinion on the process of fermentation employed at distilleries throughout France and why the results gave inconsistent results and sometimes soured the alcohol. Pasteur immersed himself in the fermentation process and very soon spotted that the current belief that fermentation was caused by a single cell microorganism dying and decomposing was incorrect. The microorganism was called yeast and Pasteur proved that the correct fermentation process required a living yeast, at the time Louis Pasteur was quoted as saying: "alcoholic fermentation is an act correlated with the life and organization of the yeast cells, not with the death or putrefaction of the cells".

What Pasteur had discovered and could prove scientifically had previously been discovered in 1836 by Theodor Schwann who suffered ridicule for his research because people were not ready to accept change, this time around Pasteur had the ear of the scientific community and the winds of scientific change were to be accepted. Pasteur later wrote in a respectful letter to Schwann where he humbly stated: "For twenty years past I have been traveling along some of the paths opened up by you"

In 1857 Pasteur returned to Paris to take up the position of Director of Scientific Studies at the École Normale Supérieure where he spent several years observing and testing the different effects of germs and microbes on foodstuffs. The results of this research produced a process that bore the great chemists name; Pasteurisation. This process involved heating farm produce such as milk or alcohol products such as beer or wine up to a temperature ranging between 60°C and 100°C and rapidly cooling them, this process killed the microorganisms that could cause the product to go bad or make the person imbibing the product to fall ill or die. Pasteurisation was revolutionary to the industries of dairy and alcohol and it is a process that is still in use in the 21st century.

Pasteur used his germ theory lessons learned in pasteurisation to hypothesise that diseases in humans could also be caused by germs and microbes, before he had the opportunity to concentrate on humans he had a silkworm problem to deal with as the European crop was being devastated by a disease and no one had a solution. After some false dawns Pasteur identified two separate parasitic microbes and created a solution for farmers to eliminate them and preserve their crops.

Pasteur then turned his attention to two deadly human diseases anthrax and rabies, he discovered that if he created a weakened form of both diseases it would work with the subjects immune system which would then overcome the lethal effects of either disease. He demonstrated the anthrax process in 1881, although this was a process similar to that previously proposed by the veterinarian Jean Joseph Henri Toussaint, it was successful. Then in 1885, after years of experimenting with rabid dogs, he demonstrated the successful vaccination of a human when, after a series of inoculations using a weakened form of the viral disease, a nine year old boy named Joseph Meister was cured by the vaccinations.

From his student days onwards, Louis Pasteur was on a scientific voyage of discovery that would lead to some of the most significant breakthroughs in microbiology and medicine of the 19th century, his legacy went beyond his personal achievements as he established the Pasteur Institute in Paris in 1887 which has persisted the great achievements of its founder throughout the twentieth century including the Nobel Prize winning discovery of identifying the HIV-1 virus in 1983.

He trail blazed his way to stand shoulder to shoulder with the most eminent scientists in French history including Blaise Pascal, Marie Curie and René Descartes as he left his mark for the betterment of humanity, so, using his words and his comments I have compiled this list of 15 of the best Louis Pasteur quotes.

The doctor Axel Munthe witnessed his bravery: "Pasteur himself was absolutely fearless. Anxious to secure a sample of saliva straight from the jaws of a rabid dog, I once saw him with the glass tube held between his lips draw a few drops of the deadly saliva from the mouth of a rabid bull-dog, held on the table by two assistants, their hands protected by leather gloves"

The pioneer of antiseptic surgery Joseph Lister was inspired by Pasteur and was quoted as saying this to him on his 70th birthday: "As a matter of fact, there is no one living in the entire world to whom the medical sciences owe so much as they do to you… Thanks to you, surgery has undergone a complete revolution which has robbed it of its terrors and extended its efficacious powers almost without limit"

The author Ross King shared this anecdote: "In September 1873 the Germans, who had been occupying sixteen départements, finally left the country. Showing remarkable resilience, the French had discharged the entire five-billion-franc indemnity in a little more than two years. These reparations had been paid so promptly thanks largely to the profits from a booming wine industry, since Louis Pasteur had discovered that pasteurizing wine—briefly heating it to fifty-five degrees Celsius to kill off the microscopic organisms—made it last longer and travel better. The result was an increase in exports to countries such as Britain and America. French art as well as French wine looked like it was beginning to travel well"

The scholar John McMurry gave this assessment: "Pasteur was far ahead of his time. Although the structural theory of Kekulé had not yet been proposed, Pasteur explained his results by speaking of the molecules themselves, saying, “There is no doubt that [in the dextro tartaric acid] there exists an asymmetric arrangement having a nonsuperimposable image. It is no less certain that the atoms of the levo acid have precisely the inverse asymmetric arrangement.” Pasteur’s vision was extraordinary, for it was not until 25 years later that his ideas regarding the asymmetric carbon atom were confirmed. Today, we would describe Pasteur’s work by saying that he had discovered enantiomers. Enantiomers, also called optical isomers, have identical physical properties, such as melting point and boiling point, but differ in the direction in which their solutions rotate plane-polarized light"

The macrobiotic dietitian Michio Kushi spoke of an unintended legacy: "Pasteur originally conceived the idea of germs and of destroying them. Although this started as a personal thing, it has mushroomed into DDT, killing beetles and worms, resulting in food contamination, much sickness, and trouble. Although he is regarded as hero by modern medicine, Pasteur will be treated in much the same way as a warmonger when he is judged in the spiritual world" 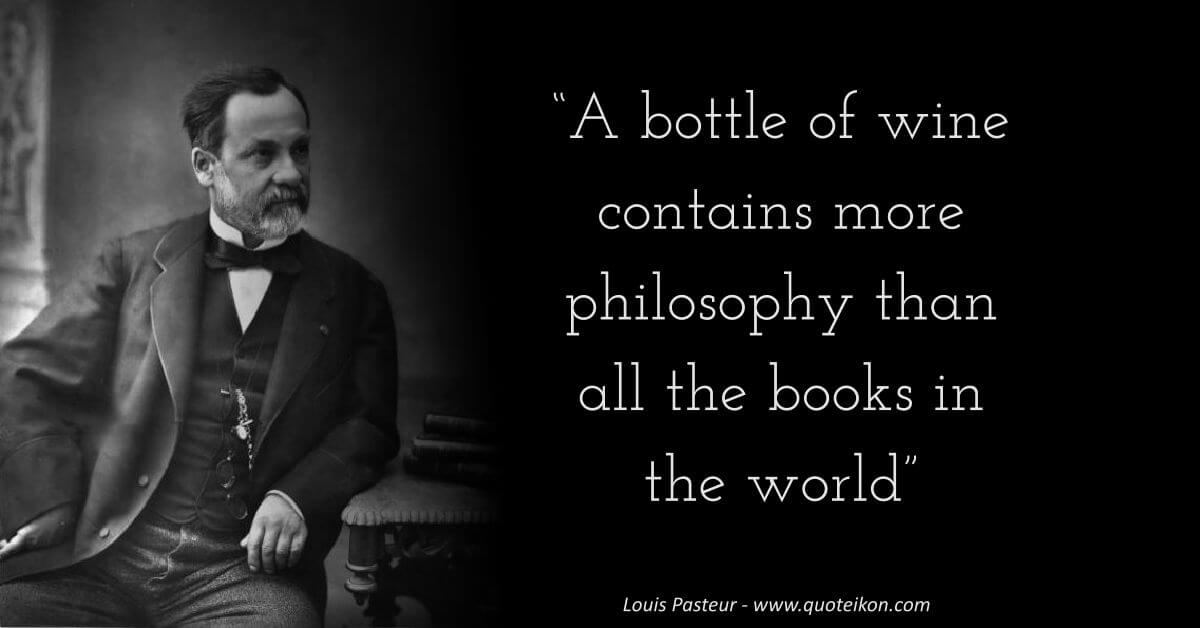