Valentina Tereshkova, who was part of Joseph Stalin's last generation, was brought up by her mother in Maslennikovo in central Russia, she never knew her father who died a war hero in WWII. There was a paramilitary flying club local to where she lived which she joined and from an early age learned how to parachute.

Tereshkova quickly became accomplished and was trained in day and night jumping onto land or the more challenging Volga River and she has nearly 100 jumps to her name. She was brave too as she was once famously quoted as saying "I learned to wait as long as possible before pulling the cord, just to feel the air; 40 seconds, 50 seconds. It’s not really falling; you experience enormous pleasure from the sensation of your whole body. It’s marvellous".

It was this bravery and experience that put her at the forefront of the selection process to be the first female cosmonaut in space. Valentina made the cut and was duly selected to pilot Vostok 6 on 16th June 1963 where in the process of making history she even made more earth orbits than all previous American astronauts combined.

Since her record breaking first space flight Tereshkova became a proverbial part of the Soviet establishment and then the uncrowned queen of Russia such is the esteem she is regarded in her motherland.

From politics to diplomacy to royal weddings and state funerals Valentina has been wheeled out as the acceptable face of Russian achievement. She was prepared to go further than no man would be prepared to go and she even volunteered herself for a one way mission to Mars. Amidst all this she shared many inspirational stories so this is my compilation of 21 of the best Valentina Tereshkova quotes.

The director of cosmonaut training Nikolai Kamanin spoke in 1961 of Soviet determination: "We cannot allow that the first woman in space will be American. This would be an insult to the patriotic feelings of Soviet women"

One of the Soviet space program designers Sergei Korolev spoke of her PR capabilities: "None could compete with Tereshkova in the ability to influence crowds, arouse sympathy among people and appear before an audience"

The Soviet leader Nikita Khrushchev was over the moon with her achievement: "Now you see what women are capable of…. I am very proud and feel fatherly pride that it is our girl, a girl from the land of the Soviets that is the first in space"

On her 80th birthday Vladimir Putin sent heartfelt congratulations: "You have always been an example to us of how you have served the motherland, over time and with different tasks. Today you continue to do so in the Duma" 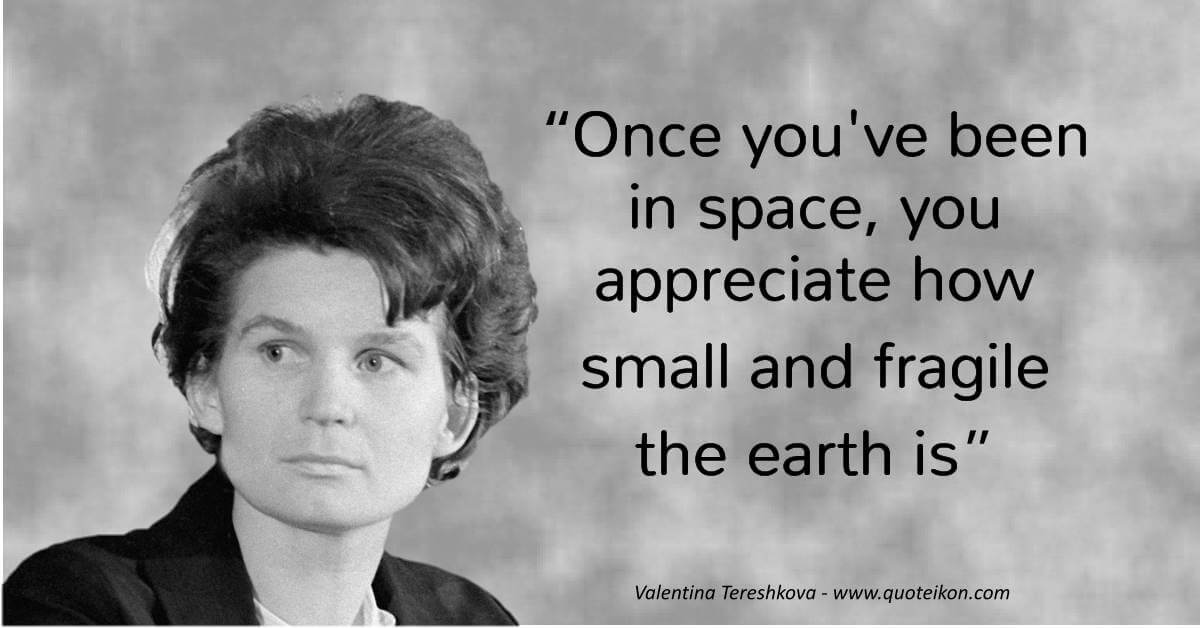