You can be fairly certain the Olympics will come around every 4 years and whilst electing a new U.S. president usually runs on the same cycle there are sometimes unexpected events that take place that have a significant effect on history. Theodore Roosevelt was urged to run for Vice President in William McKinley 1900 re-election campaign and he helped him romp to victory in the largest Republican triumph since 1872.

The vice presidency did not suit Theodore as he was more used to the cut and thrust of life on the edge, this was the man that had led the "rough riders" into war a couple of years previously and he found the role a monotonous bore. Things took a completely unexpected turn after the assassination of president McKinley and Roosevelt was sworn in as his successor.

His presidency was a remarkable difference to most of his predecessors as Roosevelt brought an energy and vigour into the White House that had seldom been seen before. He had drive and determination in abundance, he was decisive and when making speeches he could charm any crowd with his timing and elegance.

Roosevelt was also a mans man who believed in what he described as a "strenuous lifestyle", he partook in vigorous exercise including boxing where during one bout he lost vision in his left eye. He believed that a man should always uphold good principles and he always spoke of having good "character" being the trait most important to mankind.

He understood diplomacy but he was never weak as a famous Theodore Roosevelt quote articulated both his temperament and his determination when he said: "speak softly and carry a big stick". When Theodore spoke people listened, he had the respect of the nation, he understood what the people wanted and his policies reflected that.

Roosevelt's achievements in conservation were visionary, he used his powers of veto time and again to protect forest and wildlife lands and drawing inspiration from Upton Sinclair's book "The Jungle" he introduced the Meat Inspection Act of 1906 and the Pure Food and Drug Act.

Teddy, as he had been nicknamed, was responsible for breaking up monopolies on the rail roads and in the oil industry and during his tenure at the helm he proved his corruption busting reputation by raising 44 antitrust suits which was more than the previous 3 presidents combined.

His foreign policy rewarded him with a Nobel Peace prize and saw him instigate the building of the Panama Canal. Even an assassins bullet could not stop him in 1912 as Teddy continued to make his speech despite being shot while campaigning in Milwaukee, his steel framed glass case in his jacket took the brunt of the force of the bullet although it did penetrate his skin to lodge in his chest.

Roosevelt continued and completed his speech before seeking medical treatment. He is often voted as one of the greatest ever presidents and was honoured with his inclusion at the Mount Rushmore Memorial. His eloquent speaking gave great meaning to his speeches and he was good for a thoughtful one liner, so here is my compilation of 23 of the best Theodore Roosevelt quotes

The author Bram Stoker was impressed and recognised his statesmanship years before he was a presidential candidate: "Must be President some day. A man you can't cajole, can't frighten, can't buy"

The French journalist Georges Clemenceau recognised how respected he was in France: "The name Roosevelt has this legendary force in our country at this time"

The historian Thomas Andrew Bailey spoke of his electability: "He dominated his era as he dominated conversations … the masses loved him; he proved to be a great popular idol and a great vote getter"

One man not impressed by his presidency was the author Mark Twain who was quoted as saying: "Mr. Roosevelt is all that a president ought not to be - he covers the entire ground"

Upon hearing of his sad demise Vice-president of the U.S. Thomas R. Marshall was moved to say: "Death had to take him in his sleep, for if he was awake there'd have been a fight"

The historian Arthur M. Schlesinger, Jr. once asked Alice Roosevelt Longworth why her father (Theodore) held Winston Churchill in such disdain, to which she was quoted as saying: "Because, they were so much alike" 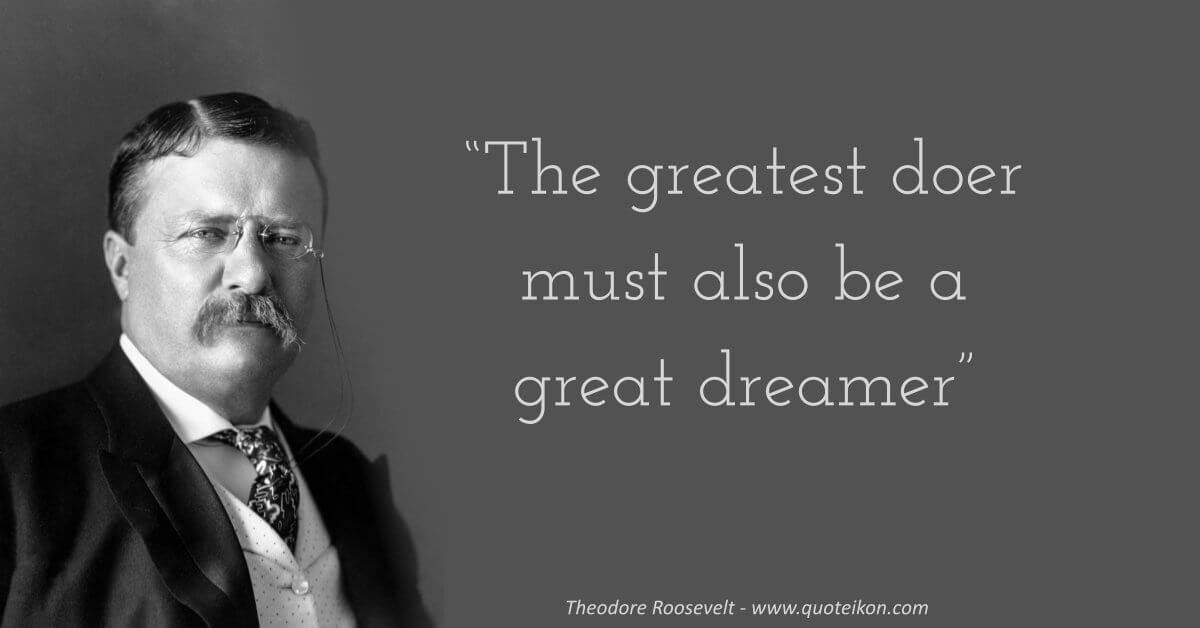