Stanley Baldwin was the Conservative politician who led the party through the turbulent political times between the two great wars and despite economic depression and the threat of another big European war still managed to serve as prime minister on three separate occasions.

Born to a wealthy industrial family his father Arthur held their local Bewdley seat in parliament until his demise in 1908 when Stanley stepped up and succeeded him as the constituencies MP. In 1917 he became Financial Secretary of the Treasury where he was aghast at the financial cost of WW1 and he showed the first glimpse of being a true leader by donating twenty percent of his wealth to the exchequer and in a partisan letter to The Times newspaper he fuelled the patriotism of the rich by appealing for donations to reduce Britain's war debt.

The 1920's was a politically balanced see-saw weighed down by depression and economic plight that saw no political party gain the large majorities required to make the changes that were needed. It was a time of political heavyweights such as Ramsay MacDonald, David Lloyd George and Winston Churchill who Baldwin managed to keep at bay despite the constant boom of political broadsides he faced.

Indeed, in 1925 Winston Churchill was quoted as saying about a Baldwin Commons speech that thwarted a revolt: "I had no idea he could show such power. The whole Conservative Party turned round and obeyed without a single mutineer. I cease to be astonished at anything".

He held respect in turbulent political waters and he could hold his own with the best of them when it came to snappy one liners as Stanley Baldwin was once famously quoted as describing two of the most passionate speech makers of the day thus: "David Lloyd George was born a cad and never forgot it; Winston Churchill was born a gentleman and never remembered it".

Baldwin remembered only too well the high human cost of WW1 and he was determined to keep Britain out of the next big war as the powder keg that was 1930's Europe grew ever more menacing and real. The press and political commentators of his day and in the early years of WW2 were not kind as they scathingly described his political legacy in words less sympathetic than the cheap jibes of spineless appeasement.

As the years passed historians are taking a more pragmatic view of his 1930's economic and anti-rearmament policies as he was in a 'damned if I do' or 'damned if I don't' kind of situation. As with all politicians if given a stage he could produce some remarkable one liners, so here is my compilation of 23 of the best Stanley Baldwin quotes

The Labour leader Clement Attlee spoke fondly of their political rivalry: "He appeared to be in many ways a typical Englishman alike in his virtues and his failings. I was for many years his political opponent, but I always regarded him not only with respect but with affection"

The Conservative stalwart Lord John Biffen revealed an unlikely Conservative trait when he quipped: "He believed that social obligations went with wealth and he lived by that precept"

Winston Churchill recognised his talent and his opportunism: "He had a genius for waiting upon events and an imperturbability under averse criticism. He was singularly adroit in letting events work for him, and capable of seizing the ripe moment when it came"

In a speech in Brynmawr on 26th April 1929 David Lloyd George included this little witticism about his political rival: "There was a popular song, "Wait till the Clouds Roll By". That seemed to be Mr. Baldwin's election song"

The historian George Macaulay Trevelyan summed up his human side quite nicely: "In a world of voluble hates, he plotted to make men like, or at least tolerate, one another. Therein he had much success, within the shores of this island. He remains the most human and lovable of all the Prime Ministers" 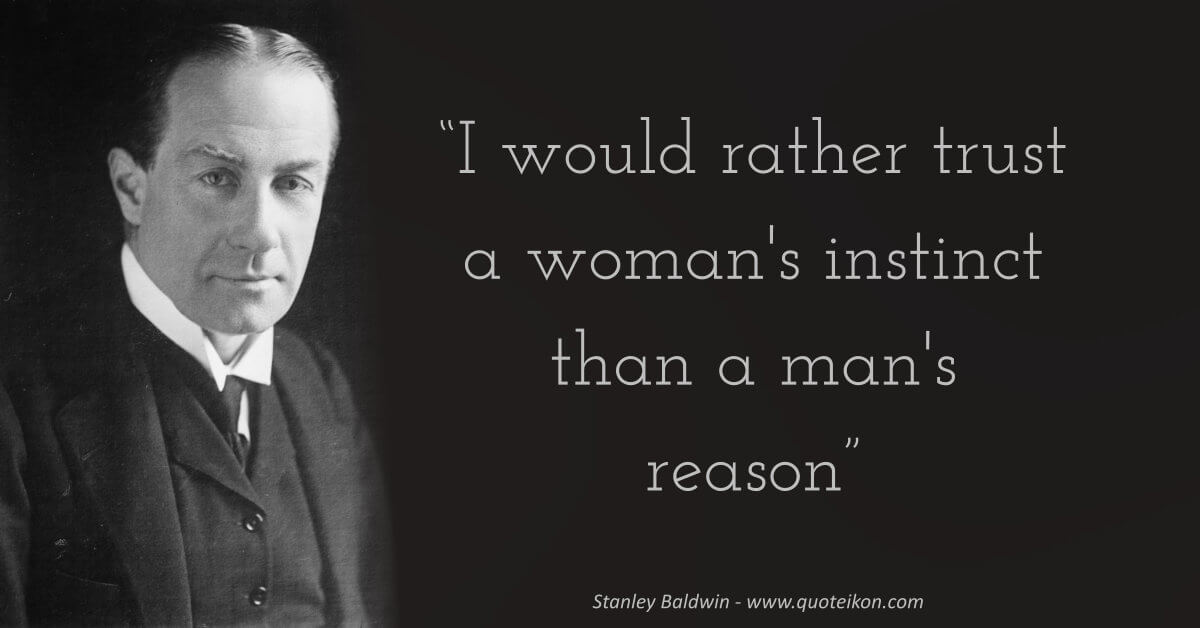