Ramsay MacDonald was a polarising figure in the emergence of the Labour party's rise to political prominence, he was a man of great moral integrity wading through a quagmire of political opportunists sniping from the safety of the changeable direction of their party machines.

With the outbreak of WWI he resigned as leader of the Labour party because of his oppostition to Britains involvement in the war, he had seen the after effects of the Boer war and he could not allow his pacifist views be changed to accommodate the politics of patriotism running through the corridors of power. For many years he was on the receiving end of scathing attacks accusing him of everything from cowardice to treason.

By 1922 the Labour party was now the main opposition to the governing Conservatives and after winning the seat for Aberavon the party had decided to forgive and he was again elected as the Labour leader. In January 1924 he made history by forming the first Labour government as he took command in his first stint as Prime Minister.

It was a turbulent period but the Labour party proved they were capable of governing the country before an anti-communist smear campaign affected MacDonald and the split parliament caused him to lose the general election of October 1924. The 1929 general election saw the labour government return to power with MacDonald again at the helm, it was another turbulent period with the whole world suffering an economic crisis.

He made a decision that he viewed as the right thing to do for the country and he disregarded the political will of his Labour party to cut public expenditure. Losing the support of his own party he did what many in the Labour ranks called "making a deal with the devil" by governing with the support of the conservative party and his hold on power lasted until 1935.

MacDonald's health deteriorated and in 1937 as part of his convalescence he boarded the ocean liner Reina del Pacifico en route to America, he passed away in the mid Atlantic leaving a legacy of bitterness amongst his political colleagues of the day.

Politics is mostly about opinions and once the fervently active and ambitious politico's of his era had all joined him in the great debating chamber in the sky a more rational judgement of his time in power began to shine a more favourable light on his actions and decisions whilst in power.

MacDonald unselfishly allowed his political reputation to be put through a press driven mincer by making unpopular decisions for the betterment of the country as a whole. He kept both his dignity and his integrity in what were very testing times and he was good for a one liner also, so this is my compilation of 16 of the best Ramsay MacDonald quotes

Winston Churchill poked fun at him by saying: "I spoke the other day, after he had been defeated in an important division about his wonderful skill in falling without hurting himself. He falls, but up he comes again, smiling, a little dishevelled but still smiling"

The Scottish labour activist Patrick Dollan labelled him thus: "The Gladstone of Labour"

In a 1966 speech, 8 years before he became prime minister, Harold Wilson adopted a more appreciative tone: "He was a man who had vision, and dared all in those years to make that vision a reality; a man who inspired affection in his associates as in his own domestic circle, and who, daring all, created a lasting and durable political instrument which today 60 years after its first political success, provides the Government of this country and in so providing owes more than many are prepared to admit to the young Ramsay MacDonald" 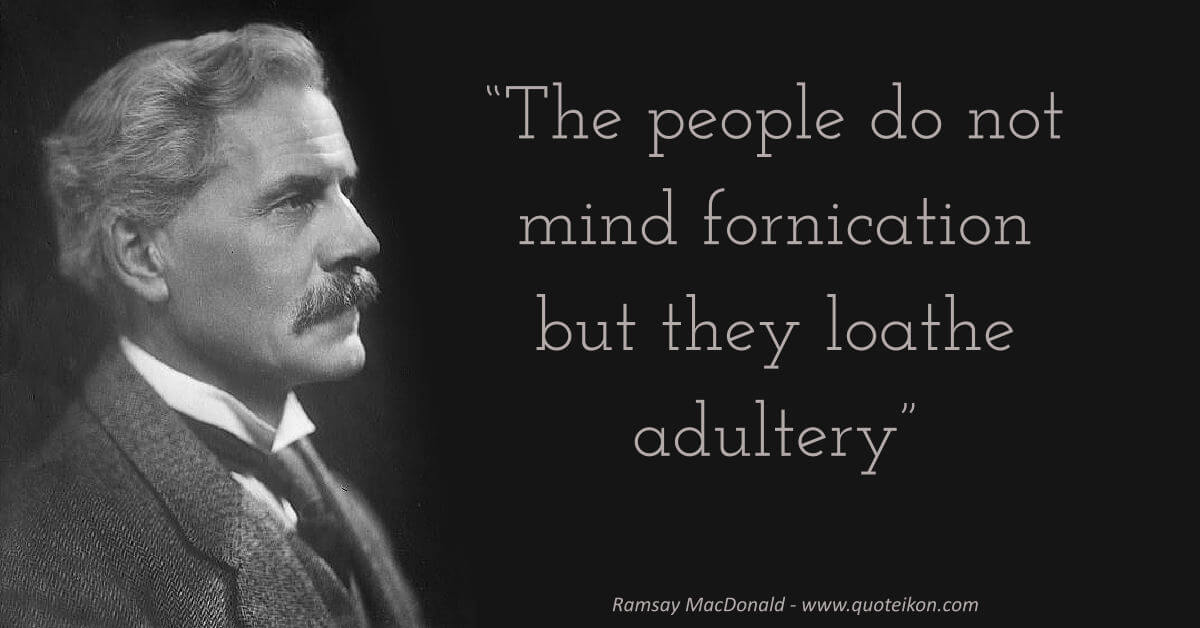