Ram Mohan Roy was born into the upper echelons of Bengal's Hindu caste hierarchy on 22nd May 1772 in Radhanagar. He received a varied education that was to prove useful in later years where he published journals in several languages most notably English, Hindi, Persian and Bengali.

In 1828 he founded the Brahmo Sabha movement which was instrumental in both social and religious reform. He campaigned vigorously against the Sati which followed a tradition of widows being sacrificed on the funeral pyre of their dead husbands. He succeeded and the practice of Sati was abolished in 1829.

Ram Mohan Roy's legacy to India was a successful reintroduction of the Vedanta school of philosophy whose pure and ethical principles were a welcome contrast to the excesses of the ruling classes.

The social reform hinduism he promoted and the large number of schools introducing an English education system are a lasting legacy to his great works and achievements.

Ram Mohan Roy often voiced his displeasure against missionaries and was quoted as saying: "In Bengal, where the English are the sole rulers, and where the mere name of Englishman is sufficient to frighten people, an encroachment upon the rights of her poor, timid and humble inhabitants and upon their religion cannot be viewed in the eyes of God or the public as a justifiable act". He went on to say: "During the last twenty years, a body of English gentlemen, who are called missionaries, have been publicly endeavouring, in several ways, to convert Hindus and Mussalmans of this country into Christianity"

In 1830 Ram Mohan Roy was appointed an ambassador of the Mughal Empire and travelled to England where he spent a successful 2 years diplomatically taking care of Indian needs back on the Indian sub-continent.

He died of meningitis on 27th September 1833 in Stapleton (just south of Bristol) and he was interred at the Arnos cemetery in Bristol (England).

Rabindranath Tagore spoke highly of him: "Raja Ram Mohan Roy inaugurated the modern age in India. He was the father of Indian Renaissance and the prophet of Indian nationalism"

Mahatma Gandhi paid him this tribute: "Roy was undoubtedly the father of advanced liberal thought in Hinduism"

Jawaharlal Nehru, India's first Prime Minister was impressed to say: "He was more than a scholar and investigator, he was a reformer above all"

The Serampore Missionary Joshua Marshman once (quite disparagingly) described Ram Mohan as: "an intelligent heathen whose mind is as yet completely opposed to the grand design of the Saviour's becoming incarnate". Then went on to call him: "an injurer of the cause of truth"

The academic Hiren Mukerjee made this comparison between Lala Lajpat Rai with Ram Mohan Roy: "If he does not fulfil all the expectations we may have from his grandeur, it was not so much his fault but the fault of his times and environment"

Dr. Sisir Kumar Das made this assessment: "Ram Mohan had left out, all passages in these gospels which describe either any miracle or refer to any prophecy or to the doctrines of atonement, Logos or the divinity of Christ... Ram Mohan is almost ruthless in his rejection of materials from the fourth gospel which is... the most important interpretation of Christ's teaching and the meaning of his life and death on the cross"

The author Sita Ram Goel made this observation: "It is only when we move to modern times that we find the first traces of sarva-dharma-samabhâva surfacing in India in the form of the Brahmo Samaj. Raja Ram Mohun Roy, the founder of this cult, was a votary of Islamic monotheism, and later on became infatuated with Jesus Christ. He confused the monism of the Upanishads with the monotheism of Biblical creeds, and gave birth to a lot of confusion. But, by and large, he stayed a Hindu who had some very hard words to say about the doings of Islam and Christian missionaries in India" 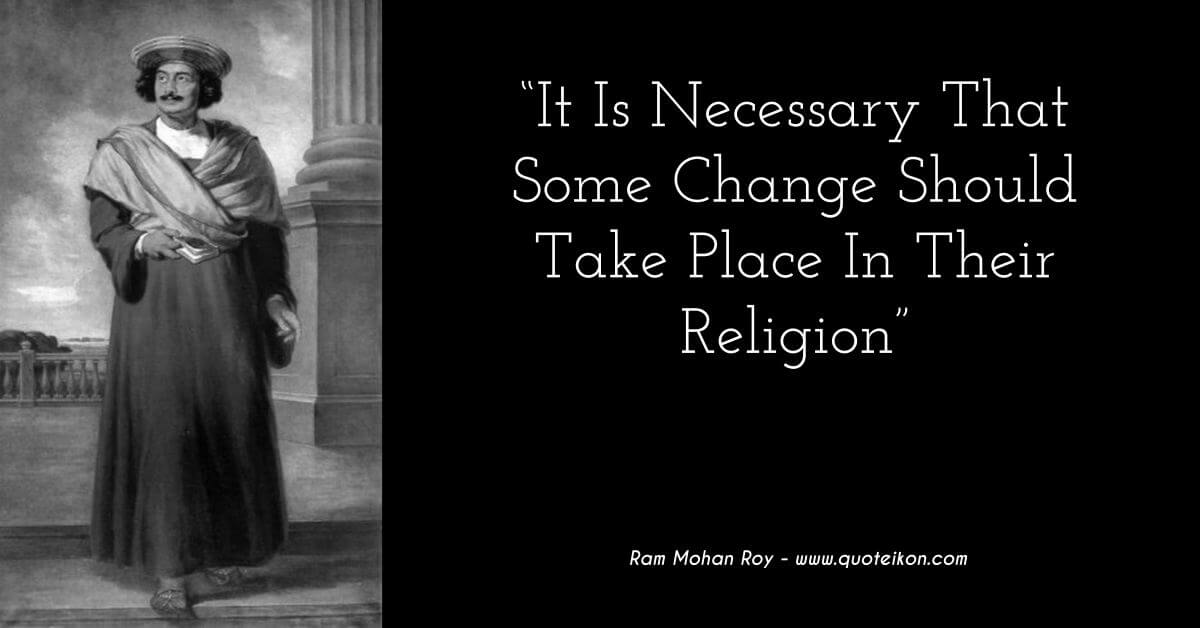