Queen Elizabeth I was the English monarch who was never meant to sit on the throne of England yet despite being removed from the line of succession in favour of her younger brother Edward and elder sister Mary she managed to keep her head and her dignity to become a legend in the history of the British monarchy. Edward died at just 15 years of age and his successor Mary caused wars and turmoil and shortly before her death she acknowledged Elizabeth as the rightful heir apparent to her throne.

Elizabeth's accession to the throne was greeted with much enthusiasm and she went on to become one of the most popular and successful monarchs in the history of British royalty. The annals of history records the Elizabethan Age in honour of her name which included her presiding over the defeat of the Spanish Armada in 1588 which was a victory over the then worlds strongest super power.

Sir Francis Drake and Lord Charles Howard led the British forces to victory and Drake was an able sea captain with a history of epic voyages to his name which included circumnavigating the globe and being labelled a pirate by the Spanish for his privateering exploits around the coast of the Americas.

Before the might of the Spanish Armada descended on England Elizabeth was boldly quoted as saying: "No prince of Europe should dare to invade the borders of my realm", and the epic quote which is one of my all time favourites: "Men fight wars. Women win them", priceless.

The people wanted their queen to get married and bear an heir to her throne and the most eligible princes and bachelors of Europe came to try to win the hand of Queen Elizabeth but all were to no avail. She was called the virgin queen but there was a pragmatic approach to her reign where she cared deeply about ruling England which was to the detriment of her many opportunities of betrothal for she knew that many of her silver tongued suitors had ulterior motives to be in the position of influence and be king to the behest of various foreign powers.

Queen Elizabeth once stated to parliament: "I have already joined myself in marriage to a husband, namely the kingdom of England", meaning that her true loyalty lay to England and the crown. Elizabeth was outwardly charming, quick witted and throughout the years she held court she proved herself as a wily operator who easily manipulated situations into her favour.

She used her femininity to great effect with princes, kings and the great and the good of her day all standing in awe of her flirtatious demeanor in court whilst knowing her ruthless streak was never far from the surface as she inherited a trait of beheading's from her father Henry VIII.

Elizabeth I is the English monarch that has been portrayed on the silver screen more than any other king or queen of England. Sarah Bernhardt was the first actress to portray Elizabeth in the 1912 silent movie called Les Amours de la Reine Elisabeth and since this screen watershed a galaxy of movie stars have reenacted the role including; Ellen Compton, Florence Eldridge, Flora Robson (twice), Bette Davis (twice), Jean Simmons, Irene Worth, Glenda Jackson, Miranda Richardson, Dame Judi Dench, Helen Mirren and Cate Blanchett to name but a few.

She was a born leader who inspired a nation during her 44 year reign, so this is my compilation of 15 of the best Elizabeth I quotes.

Quotes About Queen Elizabeth I

Winston Churchill was impressed in his assessment: "Victory over Spain was the most shining achievement of Elizabeth's reign, but by no means the only one. The repulse of the Armada had subdued religious dissension at home. Events which had swung England toward Puritanism while the Catholic danger was impending swung her back to the Anglican settlement when the peril vanished in the smoke of the burning Armada at Gravelines"

Oliver Cromwell paid this tribute to her in parliament: "Queen Elizabeth of famous memory, - we need not be ashamed to call her so! ...that Lady, that great Queen"

Sir Walter Raleigh once quipped that she was: "a lady whom time had surprised"

The historian Christopher Haigh spoke of her enduring legacy: "In 1603, Elizabeth had seemed a foolish old woman, as men looked expectantly to a Stuart king. By 1630, when Stuart kings had proved rather a disappointment, she had become the paragon of all princely virtues" 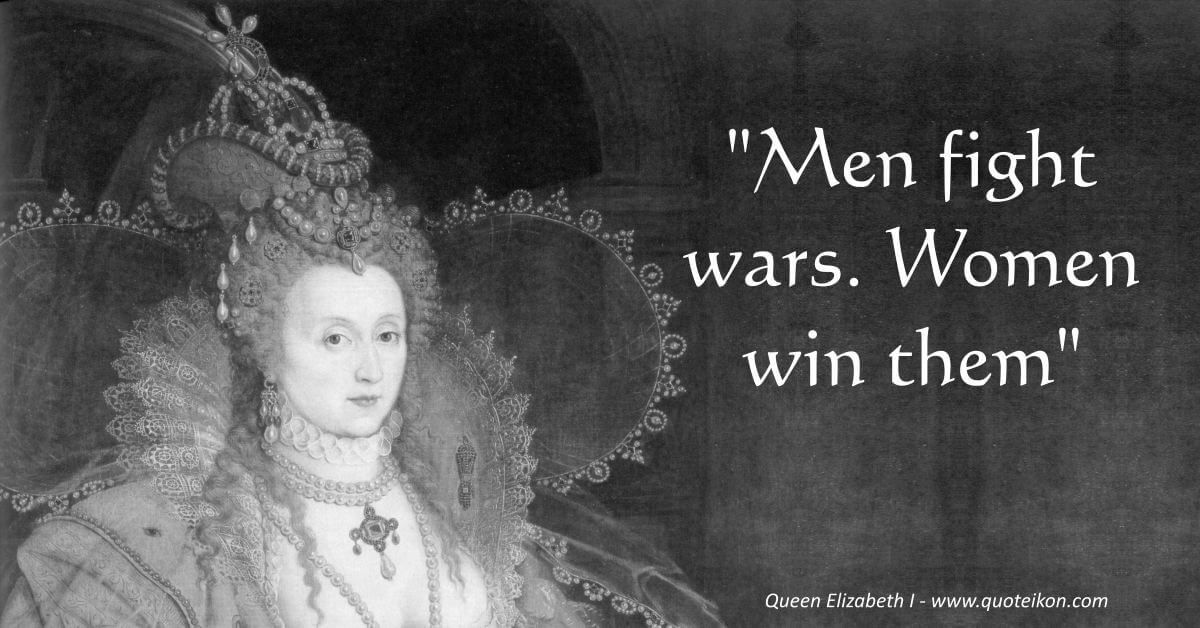