The story of Sir Walter Raleigh is a fascinating tale of 16th century swashbuckling on the high seas, fighting religious wars in Europe and firing verbal broadsides in the house of commons as an MP. Yet, despite his meteoric highs in life he was just as swiftly returned to biting the dust of terra firma. For all his various misdemeanours, with some perpetrated by others, he spent many a year incarcerated in the Tower of London. To top it all he suffered the grave misfortune of having his head chopped off in a quite reprehensible travesty of justice.

His upbringing was devoutly protestant and his family suffered under the brief reign of Mary I (1553-1558) which left him with a loathing of all things catholic. As a young man he travelled to France to fight in the French religious civil wars and later served for England fighting insurrections in Ireland.

Walter's bravery and valour were noted by Queen Elizabeth I and when his opportunity came to meet with her he proved to be a charming courtier and a favoured subject for many years to come.

Raleigh's first downfall was when he fell in love and impregnated one of the queen's ladies in waiting Elizabeth Throckmorton. They married in secret in 1591 but the following year their secret came out and the queen sent them both to the Tower of London as punishment. After a few months in the tower they were both freed and it took a couple of years for Sir Walter to get back in the Queens favour.

In 1594 Raleigh sailed to South America and explored parts of Guiana, upon his return he used some poetic licence to extend the tale of riches to be found in the new world, he published a book called "The Discovery of Guiana" in 1596 and this added fuel to the fire of the legend of the lost city of El Dorado.

In 1603 the queen died and King James I was the new monarch and within 4 months Raleigh had been arrested as a conspirator against the king and charged with treason. He was found guilty but the king commuted his sentence to life in the tower. He served a very sorrowful but productive 13 years in the Tower of London and wrote the acclaimed book "The Historie of the World" which he was allowed to publish in 1614.

Raleigh was released on licence in 1616 and set sail for Guiana under orders from the king to find El Dorado and bring back gold and riches. Part of the deal was to avoid conflict with the Spanish, but unbeknown to Raleigh his men were involved in a skirmish which saw them attack a Spanish colony and it sealed the fate of Sir Walter Raleigh.

Back in England Walter was arrested and sent to the tower which was to prove 3 times unlucky as the king ordered his head to be chopped off to appease the Spanish. Away from the politics, pirating and profiteering he was a wonderful poet and gifted writer, he was good for a one liner also so this is my compilation of 17 of the best Walter Raleigh quotes

Historian Anna Beer described him thus: "Raleigh knew how to get things done. He could justify the unjustifiable while in the same breath standing up for the underdog"

The author Alexander Balloch Grosart was dumbfounded to say: "That such a head should be struck off is of the infamies of our island story. One inevitably pronounces it damnable that it should have been possible for a sovereign of England to perpetrate judicial murder of this type and the nation be dumb"

One of the judges at his trial later recalled in disbelief: "The justice of England has never been so degraded and injured as by the condemnation of the honourable Sir Walter Raleigh" 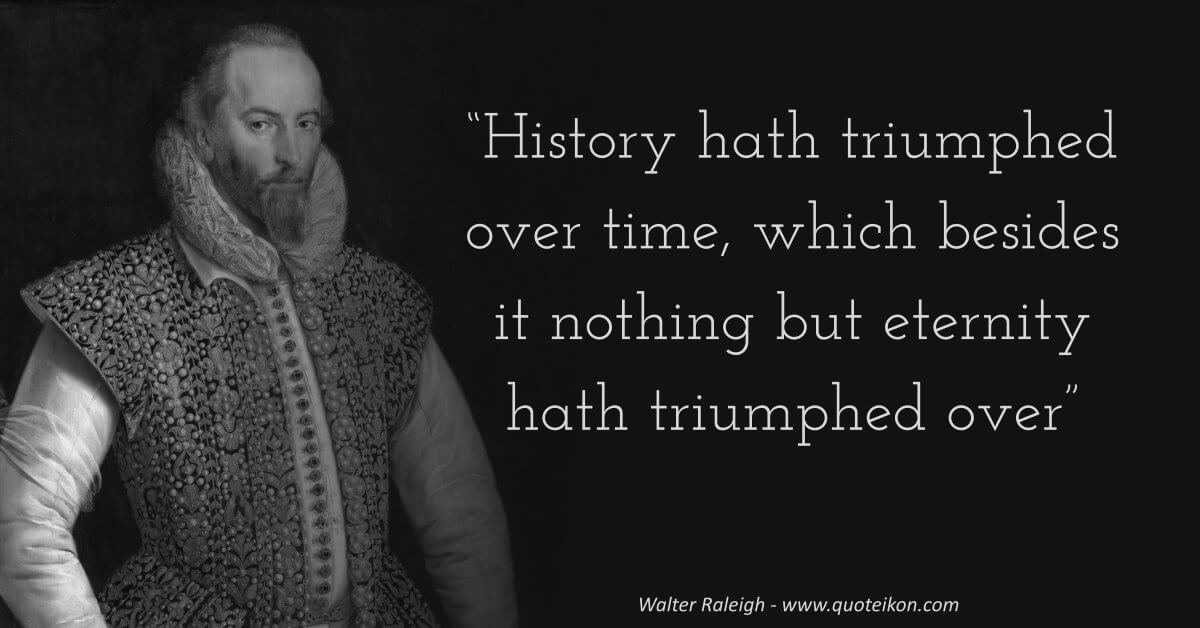