Niccolò Paganini was the Genoese violinist whose frenetic style captivated 19th century audiences whose appreciation elevated him to become the most celebrated virtuoso of his era and beyond.

He was a child prodigy who outperformed each and every one of his many teachers during his meteoric rise to fame which saw him give his first public performance at eleven years old and by the time he was fifteen his mercurial talent saw him playing his own solo tours.

There was a price to pay for his early fame as Paganini drifted into alcohol fuelled gambling binges and womanising on a scale that would make Errol Flynn blush and Giancoma Casanova green with envy, he was at a point where it could either make or break his precocious talent. After the armies of Napoleon Bonaparte had taken control of much of northern Italy the emperor placed his sister Elisa Baciocchi in control of the Republic of Lucca in 1805 and Paganini was chosen as solo violinist for the Baciocchi court which gave the young musician some much needed stability in his life. By 1807 Paganini was in Florence as he became a favoured musician in the entourage of Baciocchi when she became the Grand Duchess of Tuscany.

In 1809 Paganini left the Florentine court on good terms to pursue a solo career and he embarked on what became a five year tour starting in Vienna and triumphantly culminating in an eagerly anticipated Paris performance that confirmed his superstar status as a virtuoso violinist.

A typical Paganini concert would involve everything from audience hysteria to critics accusing him of having made a pact with the devil such was the astonishment at not just his technical ability but the speed and the presence of his stage performance. An accomplished composer, Paganini’s Caprice No. 24 is considered to be one of the most technically challenging pieces ever written for the solo violin.

As a virtuoso performer Paganini took the evolution of the violin performance to new heights drawing comparisons to historic giants of innovative bowing techniques such as Johann Sebastian Bach and Antonio Vivaldi. Not satisfied with the critical acclaim received for his unparalleled skill and technique on the violin, Paganini became the first soloist to perform publicly without sheet music as he memorised everything he needed to play.

The mastery of his instrument led critics to claim Niccolò Paganini was the greatest virtuoso violinist in the world and his on stage improvisation backed this up with legendary tales of his performances continuing unabated through broken strings yet still delivering an ambrosial sound of melodious mystery that left audiences gasping in the wake of the ferocity of his bow.

Off stage Niccolò Paganini was as benevolent to the poor as he was influential to the Romantic movement on stage with his revolutionary composition for the violin. Despite his many affairs he remained unmarried although his mistress, the singer Antonia Bianchi, bore him a son who they named Achille Ciro Alessandro. His legacy as the whirlwind virtuoso violinist places Paganini at the apex of the classical world for his instrument whose on stage shock and awe was summed up by an astonished German poet called Ludwig Boerne who described his 1831 Paris debut by saying: "It was a divine, a diabolic enthusiasm. The people have all gone crazy and will make everybody else crazy". In discourse he rarely minced his words of wisdom which I have collected to compile this list of 18 of the best Niccolò Paganini quotes

Franz Liszt summed him up thus: "Charmed, stunned, yet seeing clearly at the same time, he could have cried out for sorrow and exultation. This playing! it was the vision of his soul"

Franz Schubert was inspired: "In Paganini's adagio, I heard the singing of angels. We will not see this fellow's like again"

The writer Gustav Schilling felt his presence: "At the first stroke of the bow on his Guarnerius, one might almost say at the first step he took into the hall, his reputation was decided in Germany. Kindled as by an electric flash, he suddenly shone and sparkled like a miraculous apparition in the domain of art"

The composer Hector Berlioz lamented with this anecdote: "All Paris was raving about Paganini, while I, with my usual luck, was kicking my heels in his native town instead of listening to him"

The composer Albert Jarosy recognised the talent: "There was nothing wanting to the greatness of Paganini, not even the failure of his contemporaries to understand him"

The critic Heinrich Heine was impressed to say: "Is that a man brought into the arena at the moment of death, like a dying gladiator, to delight the public with his convulsions? Or is it one risen from the dead, a vampire with a violin, who, if not the blood out of our hearts, at any rate sucks the gold out of our pockets? Such questions crossed our minds while Paganini was performing his strange bows, but all those thoughts were at once still when the wonderful master placed his violin under his chin and began to play... Paganini with each stroke of his bow brought visible forms and situations before my eyes; he told me in melodious hieroglyphics all kinds of brilliant tales; he, as it were, made a magic lantern play its coloured antics before me, he himself being chief actor.... A holy, ineffable ardour dwelt in the sounds, which often trembled, scarce audibly, in mysterious whisper on the water, then swelled out again with a shuddering sweetness, like a bugle's notes heard by moonlight, and then finally poured forth in unrestrained jubilee, as if a thousand bards had struck their harps and raised their voices in a song of victory"

Robert Schumann shared this comparison: "The mysterious force with which it manages to move us, in addition to Liszt, only Paganini possesses it"

The British musician William Gardiner gave this assessment: "There was no trick in his playing; it was all fair, scientific execution, opening to us a new order of sounds, the highest of which ascended two octaves above C in alt"

The composer Gioachino Rossini was relieved to say: "Truly, it is fortunate that Paganini did not devote himself exclusively to lyric composition; he would have become a very dangerous rival"

The composer Ignaz Moscheles found him hit and miss: "His concertos are beautiful, and have even their grand moments; but they remind me of a brilliant firework on a summer's eve, one flash succeeding the other—effective, admirable—but always the same. His 'Sonate Militaire,' and other pieces, have a southern glow about them, but this hero of the violin cannot dispense with the roll of the drum; and completely as he may annihilate his less showy colleagues, I long for a little of Spohr's earnestness, Baillot's power, and even Mayseder's piquancy" 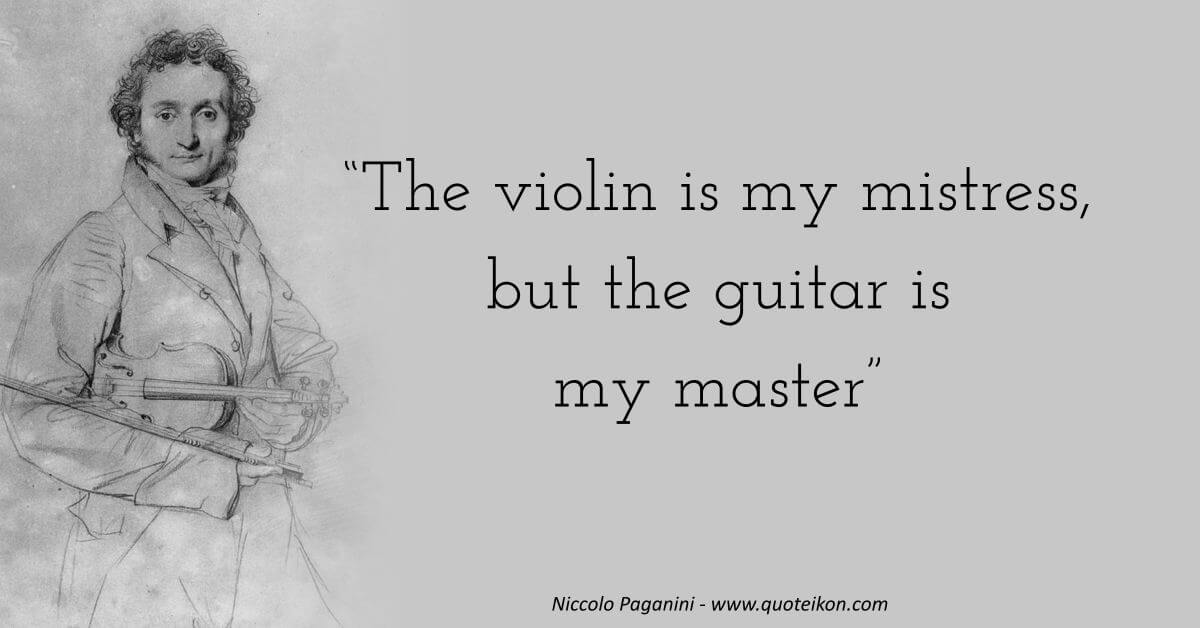