Mickey Spillane was born in Brooklyn but grew up in the shadow of New York on the not so mean streets of Elizabeth, New Jersey. Nonetheless Spillane had a appetite for the written word and it was not long until he was writing for comics and magazines alike.

Spillane was later quoted as saying that the comic book scene was "a great training ground for writers". Indeed his first creation was a private investigator called Mike Danger that he struggled to sell to the comic publishers. So he decided to ratchet up the sex, gore and violence a few notches and turn it into a novel with the not too subtle name change from Mike Danger to Mike Hammer and Spillane's first novel 'I, The Jury' was born in 1947.

Post war America was fed up of being drip fed the old classics and was looking for something new and vibrant and the rather shady character of Hammer became the new hero of the masses. Spillane grabbed the market by its short and curlies and was soon the king of pulp fiction, he was the prince of the private investigator genre and the literary giants of the day gasped in awe as he sold his books by the millions.

Literary critics queued up to denounce his work as sordid, nauseating and downright dreadful they described it in words that would make an alley cat blush. But Spillane was undaunted, a quote oft trotted out was when he stated; "If the public likes you, you're good", and the public did indeed like him, at the last count at least 220 million of them liked him by putting their money into his pockets by buying his books.

Ernest Hemingway disapproved of his writing and had a legendary feud with Spillane, but he was not alone as the critics allowed their literary snobbery to cloud their judgement and their stance cemented itself as jealousy as their frustration grew in tandem with Spillanes book sales. This reminds me of the Frank Sinatra quote: "The best revenge is massive success" and novelists do not come much bigger than Spillane with 7 of his books in the top 25 best selling fiction list for the 20th century.

Hard bitten writers are great for one liners so this is my compilation of 16 of the best Mickey Spillane quotes.

The novelist Lawrence Block paid him a somewhat unorthodox compliment: "I learned a lot about transitions from reading Mickey Spillane. In the early Mike Hammer books, he hardly ever explained how Hammer got from one place to another, or wasted time setting up scenes elaborately. There were no slow dissolves in those books. They were all fast cuts, with each scene beginning right on the heels of the one before it. Since the books had enormous appeal to a generally unsophisticated audience, I would assume few readers had trouble following the action line, for all the abruptness of the transition"

The writer Max Allan Collins explained his sales strategy: "Spillane once persuaded his publisher to run a full-page newspaper ad with blurbs from his negative reviews, along with his stratospheric sales figures and the tagline 'Let’s hope the next one gets even worse reviews'"

The philosopher Ayn Rand was impressed to say: "There is no one that I could say I admire among the so-called serious writers. I prefer the popular literature of today, which is today’s remnant of Romanticism. My favorite is Mickey Spillane"

Ayn Rand went on to say: "He is primarily a moralist. In a primitive form, the form of a detective novel, he presents the conflict of good and evil, in terms of black and white. He does not present a nasty gray mixture of indistinguishable scoundrels on both sides. He presents an uncompromising conflict. As a writer, he is brilliantly expert at the aspect of literature which I consider most important: plot structure"

Dr. Daniel Turner described him thus: "Mickey Spillane was a master at the typewriter. It was like his piano. He was hunting and pecking at that keyboard to keep the smoke coming out of the chimney, to keep the bills paid" 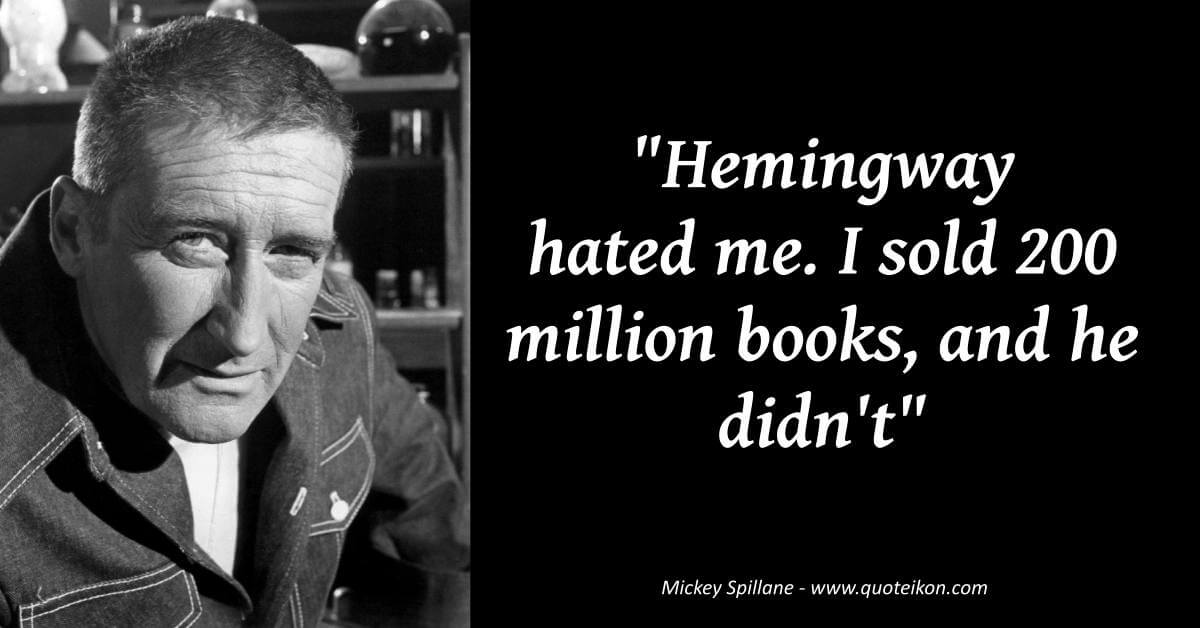