Born to the spirit of enlightenment Ludwig van Beethoven set the tone for composers stuck in their classical ways to take the leap into the romantic era of musical influence as he stood on the shoulders of all who went before to create a musical tapestry so sublime yet grippingly intensive to unleash a melodic passion even in the most discerning listener.

Beethoven was born to a musical family who encouraged him to learn music from an early age, he received an assortment of private tutelage including from the Bonn electoral choir organist Christian Gottlob Neefe who was to become his mentor during his formative years. His fathers main motivation for this education was money, his rationale was the young Beethoven could become a successful child prodigy like Mozart or at least have a skill to be employed as a court musician for many years to come.

Beethoven had a natural affinity to music and started his career by being employed by the court as a reserve organist at the age of 11, however the young prodigy had higher ambitions as at 12 years old he published his first composition and he dreamed of playing in Vienna, the home of the Habsburg empire and the centre of world for musical excellence.

At seventeen he travelled to Vienna with the hope of meeting the master Mozart but his trip was cut short when he received news his mother had fell ill so he returned home and continued his musical studies whilst writing new compositions.

In 1792, one year after Mozart's death, Beethoven accepted an invitation from Joseph Haydn to study in Vienna under his tutelage which he gladly accepted, he was now a 22 year old with a burning ambition to succeed. Beethoven was able to survive in Vienna as he received a stipend from his sponsors in Bonn, however this source of funds dried up in 1794 when his home town fell to the French as part of the Napoleonic empire expansion. By this time Beethoven had built up a good reputation for himself as a virtuoso pianist playing in the salons of Viennese nobility who upon hearing of his sudden financial plight rallied around so he quickly found patronage with a succession of aristocratic benefactors.

By 1795 Beethoven started to put his reputation to the test by performing his own piano concertos which were generally well received, he composed his first six string quartets by 1800 and his first symphony also premiered in the same year to high critical acclaim. The stage was set for the young composer to make his mark, but the winds of change were sweeping through Europe, Napoleon Bonaparte was busy crushing empires and redrawing the map of the continent, music was the last bastion of hope where people looked for inspiration in a chaotic world of changing aspiration.

To deny Ludwig van Beethoven was influenced by the politics of the day would be credulous in the extreme, Beethoven communicated emotions through his music and at the core of Europe was the turmoil of the militaristic drum reverberating around a continent in constant change, but who would be the winner? Whose drum would bang the loudest? It mattered not, Beethoven did not pick sides with explicit political reference, he felt the pulse of an empire and tapped into the passion of the people which became his creative muse. His irrational temperament became his ingenious eccentricity, it gave him a carte blanche handle on creativity in the sphere of musicality and Beethoven immersed himself in his immense imagination for the melodic that produced some of his epic early works including the "Eroica symphony" performed in 1805 and brilliant sonato's such as "Appassionata" in 1806.

The artistic talent of Beethoven was just warming to the task as his best masterpieces were still figments of a musical realm yet to be imagined as he gifted the world his creative spirit with the ever ebullient "Fifth Symphony" that became one of the most played pieces of the modern repertoire and the revolutionary "Choral Symphony" which, quite remarkably, he wrote when he was completely deaf.

The creative genius of Ludwig van Beethoven stretched his artistic limitations beyond the expectations of mere mortals when assessing his musical output, after going completely deaf he relied on his mind's ear and natural instinct for melodic harmony to compose his musical thoughts into his final finished 9th symphony which he first performed on 7th May 1824 at the Theater am Kärntnertor in Vienna. It was a tense evening because Beethoven had not performed live since 1822, yet here he stood, baton in hand ready to unleash his most imaginative Symphony No 9 on an audience primed to witness history in the making. It was to be a memorable night as one of the violinists that evening Joseph Böhm was quoted as saying: "Beethoven himself conducted, that is, he stood in front of a conductor's stand and threw himself back and forth like a madman. At one moment he stretched to his full height, at the next he crouched down to the floor, he flailed about with his hands and feet as though he wanted to play all the instruments and sing all the chorus parts. The actual direction was in Louis Duport's hands; we musicians followed his baton only".

In the creation and first performance of his ninth symphony, Beethoven had come through what must have been the most challenging of circumstances, at the end of the concert he had to turned around to witness the rapturous applause he was unable to hear because of his disability. It was his reward for his last great masterpiece, but I cannot bear to contemplate how tortured his mind must have been to create such melodic beauty but not be able to actually hear it, perhaps his mind's ear was stronger than anyone could ever imagine and he heard every single note in that realm of sublime creativity that had earlier so painstakingly composed this exquisite piece of musical history.

His legacy, much like his bellowing personality, is one for the ages to revere as the tortured soul compelled to compose his way into the hearts and minds of a world that still stands in awe at his musical achievements. His blustering words have been gleaned and measured for meaning more than any other composer as a library of books have been written about this musical legend which I have used to help compile this list of 21 of the best Ludwig van Beethoven quotes.

The composer Joseph Haydn recognised the talent: "Beethoven will in time become one of the greatest musical artists in Europe, and I shall be proud to call myself his teacher"

Franz Liszt looked back fondly about meeting the great man: "I was about eleven years old, when my highly esteemed teacher Czerny introduced me to Beethoven. He had long before told him about me and had asked him to hear me play. But Beethoven had aversions against prodigies and for a long time refused to hear me. Finally though he was persuaded by my indefatigable teacher Czerny and said: 'Then for God's sake – bring the little rascal'."

The composer Christian Gottlob Neefe spoke highly of the child prodigy: "If he continues like this, he will be, without a doubt, the new Mozart"

The author Ernst Theodor Amadeus Hoffmann summed him up thus: "Beethoven’s music sets in motion the machinery of awe, of fear, of terror, of pain"

The conductor Yehudi Menuhin was praiseful with his words: "A colossus beyond the grasp of most mortals, with his totally uncompromising power, his unsensual and uningratiating way with music as with people"

The biographer Johann Aloys Schlosser talked of his legacy: "His art reached a level far above what others will attain"

The Viennese pianist Abbé Joseph Gelinek described him thus: "That young fellow must be in league with the devil. I’ve never heard anybody play like that! …he manages difficulties and effects at the keyboard that we never even dreamed of"

Count Ferdinand Von Waldstein thought fate would favour him kindly: "You are going to Vienna in fulfillment of your long-frustrated wishes. The Genius of Mozart is mourning and weeping over the death of her pupil. She has found a refuge but no occupation with the inexhaustible Haydn; through him she wishes to form a union with another. With the help of assiduous labor you shall receive Mozart's spirit from Haydn's hands"

The composer Carl Czerny shared this assessment: "His improvisation was most brilliant and striking. In whatever company he might chance to be, he knew how to produce such an effect upon every hearer that frequently not an eye remained dry, while many would break out into large sobs; for there was something wonderful in his expression in addition to the beauty and originality of his ideas and his spirited style of rendering them"

The composer Leonard Bernstein was impressed to say: "Form is only an empty word, a shell, without the gift of inevitability; a composer can write a string of perfectly molded sonata-allegro movements, with every rule obeyed, and still suffer from bad form. Beethoven broke all the rules, and turned out pieces of breathtaking rightness. Rightness - that's the word! When you get the feeling that whatever note succeeds the last is is the only possible note that can rightly happen in that instant, that context, then chances are you're listening to Beethoven. Our boy has the real goods, the stuff from Heaven, the power to make you feel at the finish, "Something is right in the world". There is something that checks throughout, that follows its own law consistently--something we can trust, that will never let us down" 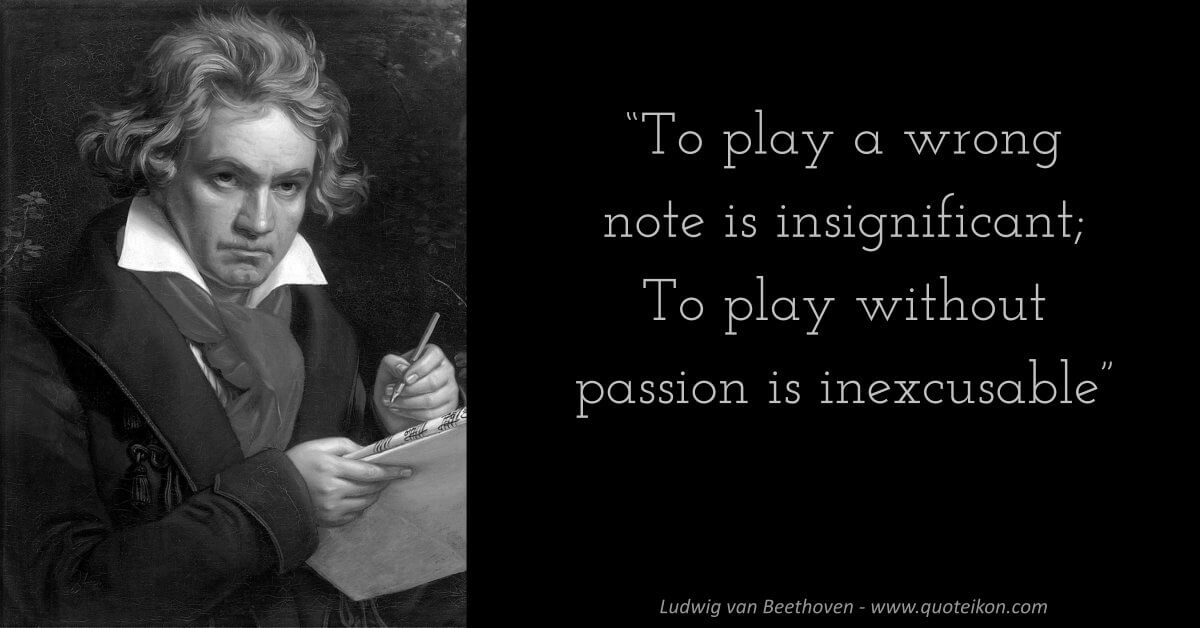