Kim Philby was the double agent whose escapades of espionage scandalised Britain's top spy network MI6 when he crossed the cold war divide and defected to the Soviet Union in 1963. He left in his wake a security service shamed by its incompetence as the depth of his treachery was fully revealed.

Philby was Cambridge educated and it was during these years his leanings towards Communism grew and he became a part of what is now famously known as the Cambridge five along with Anthony Blunt, Donald Maclean, Guy Burgess and John Cairncross. After Cambridge Philby went to Vienna and married a member of the Communist party Litzi Friedmann, it was a marriage that helped her evade the Adolf Hitler inspired Nazi regime and also raised Philby's profile as someone to be approached as a potential Soviet spy. Arnold Deutsch was the Soviet agent who recruited Philby as an agent to the NKVD, and it was to Deutsch that Kim Philby recommended recruiting Donald Maclean and Guy Burgess.

Philby had to cut all his ties to Communism to be a useful spy to the Soviets and he even went as far to ingratiate himself to the forces of General Franco, who were anti Communist, when he was covering the Spanish civil war as a journalist. It was during this time Philby started passing information to both the British and the Soviets.

In 1940 Philby joined MI6 and he was soon supplying information to the Joseph Stalin regime to whom he sent intelligence about Germany's invasion of the Soviet Union code named "Operation Barbarossa" and the Japanese intention not to attack the Soviets but to expand into SE Asia instead. Kim Philby was instrumental in the turning point of the German offensive when he passed vital information about the Nazi's "Operation Citadel" which allowed the Soviets to prepare and win the decisive battle of Kursk in 1943, from this point on Germany was on the back foot fighting a losing battle.

In 1945 Konstantin Volkov was an NKVD agent working in Istanbul who applied for political asylum in England and offered to give information revealing the names of three Soviet agents inside Britain. Philby acted fast to inform his NKVD handlers who had Volkov arrested and sent back to the NKVD headquarters in Moscow which was by then under the watchful eye of the blood thirsty Lavrentiy Beria. Philby avoided suspicion about Volkov's disappearance because it was found that the Soviets had tapped the telephones of the British Embassy in Ankara where the negotiations for his defection had taken place.

Philby had led a charmed life, but the cold war was beginning and Great Britain's security service had failed to notice the red flags of his Communist past and seemed indifferent to his penchant for consuming vast quantities of alcohol. In 1949 Philby was posted to Washington working closely with the CIA as the chief British intelligence officer in a position where he could readily pass top secret information t the KGB. However Philby found himself in the midst of a spy scandal when the Americans uncovered information about the British sending information to the Soviets from inside the British embassy in Washington.

Donald Maclean was the chief suspect for the Washington leaks and he was due to be questioned by MI6 but Philby tipped off Guy Burgess who drove Maclean to Southampton docks where they both boarded a ship to France and from there made their way to Moscow via Prague. Because both agents absconded it was realised they were in cahoots together and the suspicion fell upon Philby as the "third man" in the spy ring who tipped them off in time to make their escape. Kim Philby was grilled by investigating officers from MI5, the interrogation went on for weeks and although no proof of his collusion could be proven his position was compromised and he was forced to resign.

In 1955, after a series of investigations, Philby was officially cleared of any involvement in the spy ring by the Foreign Secretary Harold MacMillan who was quoted as saying "I have no reason to conclude that Mr. Philby has at any time betrayed the interests of his country, or to identify him with the so-called 'Third Man', if indeed there was one".

Philby went to work as a journalist in Beirut and although the cloud of suspicion was still in peoples minds he continued passing low key information to both the British and the Soviets. Eventually it was the American's who pieced together who the "third man" was and passed the information to MI6 who sent Philby's former colleague Nicholas Elliott to Beirut to extract a confession. After confronting Philby he verbally confessed but was reluctant to sign the confession asking for a delay, Elliot agreed and rescheduled another meeting. Philby contacted his Soviet handler and requested asylum, his extraction from Lebanon was swift as he boarded a Soviet freight ship called The Dolmatova whose destination was Odessa, the "third man" was finally exposed and he would never again set foot on British soil.

There is speculation that the British allowed him to leave to avoid an embarrassing show trial where the agency's name would be dragged through the mud. Everything was not all rosy for Philby in Moscow as his Soviets hosts were suspicious he was still an active British agent so he was never welcomed into the KGB fold and had to be content to live out his life in his Moscow flat being closely monitored by the nation he sacrificed everything for.

Kim Philby found the only absolutes in his Moscow life to be the solace of vodka whilst back in Blighty a succession of celebrated authors churned out spy novels by the dozen based on the espionage of this turncoat MI6 agent whose betrayal outsmarted some of the finest analytical minds the western intelligence services of the cold war could muster. He lived out his days in relative comfort, wrote his memoirs and gave selected interviews, where the KGB permitted, his undeniable charm was a major reason he was never caught and his smooth tongue helped me to compile this list of 25 of the best Kim Philby quotes.

The MI6 Intelligence Officer Nicholas Elliott was outraged at the betrayal: "I once looked up to you, Kim. My God, how I despise you now. I hope you've enough decency left to understand why"

The former director of the CIA Allen Dulles called him: "The best spy Russia ever had"

The historian and former curator of the CIA's Historical Intelligence Collection Hayden Peake talked of Philby's time in Moscow: "He had the whole collection of Marx in Russian on his book shelf but he didn't speak a word of Russian. Maclean did, he was fluent. And Rufina learnt English when the pair married. He could learn it and remember bits, but he never spoke it"

The author Graham Greene gave this assessment: "The end, of course, in his eyes is held to justify the means, but this is a view taken, perhaps less openly, by most men involved in politics, if we are to judge them by their actions, whether the politician be a Disraeli or a Wilson. 'He betrayed his country' – yes, perhaps he did, but who among us has not committed treason to something or someone more important than a country? In Philby's own eyes he was working for the shape of things to come from which his country would benefit"

At one point, the MI6 officer and later historian Hugh Trevor-Roper was impressed to say: "I looked at Philby. He alone was real. I was convinced he was destined to head the service"

The author Michael Smith shared this grim assessment: "The number of MI6 operations destroyed and agents killed as a result of Philby’s betrayal is impossible to calculate. But operations mounted into the Baltic states, Poland, Albania, and the southern Soviet Union were all compromised by Philby’s involvement. Some of those operations were no doubt doomed to failure for other reasons, but the full extent of their failure is down to Philby"

The Soviet agent Theodore Maly wrote in a letter to the NKVD regarding a plan to assassinate Spain's General Francisco Franco: "Though devoted and ready to sacrifice himself, [Philby] does not possess the physical courage and other qualities necessary for this [assassination] attempt"

His 4th wife Rufina Ivanovna Pukhova spoke of his disillusionment at life in the Soviet Union: "Kim believed in a just society and devoted his whole life to communism. And here he was struck by disappointment, brought to tears"

Alan Bennett shared this observation: "Philby does seem to have been responsible for the betrayal and presumed torture and death of a network of agents in a way that's never been proved of Blunt. What counted though against Blunt, and Burgess too, was that they weren't journo-friendly. Journalists look after their own and Philby masqueraded as a devil-may-care drunken newspaperman and so was treated more indulgently by those in his profession"

The author Phillip Knightley posed this question: "Could the British intelligence service really be run by such fools that no one had noticed that precious information was leaking to Moscow? ... that Philby, with his Communist views in Vienna and his Austrian Communist wife, had been recruited for SIS and had sailed through its vetting procedures?" 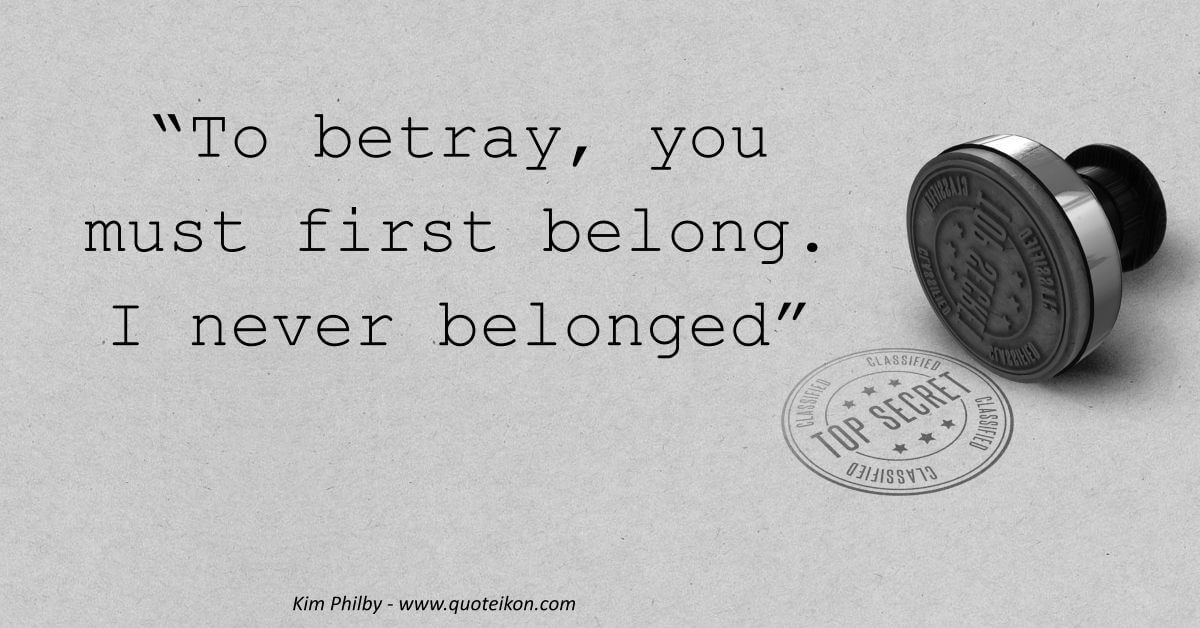