Kim Jong Il was born in 1941 in the Soviet Union to a military family where his father was a commander of the Soviet 88th brigade that consisted of Chinese and Korean conscripts.

His family settled back into Korea after the Japanese occupation ended at the twilight of WWII only to see more conflict in the shape of the Korean war which was supported tacitly by the Joseph Stalin Soviet regime and more overtly by Mao Zedong and his Communist forces.

Once his father took control of what is now North Korea under the guise of the Democratic People's Republic of Korea and he stayed in power until his death in 1994. Kim Jong Il had been groomed for power for many years and by 1980 was openly mooted as the heir apparent to take supreme command.

Although firm favourite to take over power upon his fathers death it took him 3 years to consolidate his position and by 1998 he fulfilled his destiny to become Supreme Commander of North Korea. The break up of the Soviet Union in the early 90's meant dwindling support from Moscow and the economic follies of Kim Jong Il's regime saw the country plumb the depths of famine in the mid 1990's. This led Kim Jong Il to support a military first stance whereby the army grew strong at the expense of the people.

Politics aside he was a film buff bar none who had a movie collection in excess of 20,000 dvd's including many by his favourite singer and actor Elvis Presley. In 1978 he even organised the kidnapping of South Korean movie producer and director Shin Sang-ok in a bid to bolster the North Korean film industry, he even kidnapped his wife to make Shin Sang-ok feel happy in his new Pyongyang home.

The most famous North Korean movie he produced was Pulgasari in 1985 and one year later Shin Sang-ok escaped from North Korea after 8 years of captivity.

As eccentric leaders come Kim Jong Il has been portrayed as being up there with the best of them, although Madeleine Albright described him as attentive to detail and a reasonable man in negotiations, so maybe the western media played that one up a bit. All great leaders start off as well meaning but not many attain the giddy heights of Supreme Leader so here is my compilation of 15 of the best Kim Jong Il quotes.

The Russian scholar on the Korean peninsula Andrei Lankov compared two legacies: "Kim Il Sung remains venerated, and due to the luck of dying in time, has a remarkably good reputation in death. The opposite is very much the case with his unfortunate son, Kim Jong Il, who inherited power in 1994 and reigned for 17 turbulent years, till 2011"

The North Korean defector Kim Duk Hong was not exactly complimentary: "When it comes to the orchestration of terror, Kim Jong-il is a natural born genius"

The U.S. Secretary Of State Madeleine Albright described him diplomatically: "I found him very much on top of his brief"

When he was U.S. President George W. Bush was not a fan: "Look, Kim Jong-il is a dangerous person. He's a man who starves his people. He's got huge concentration camps. And ... there is concern about his capacity to deliver a nuclear weapon" 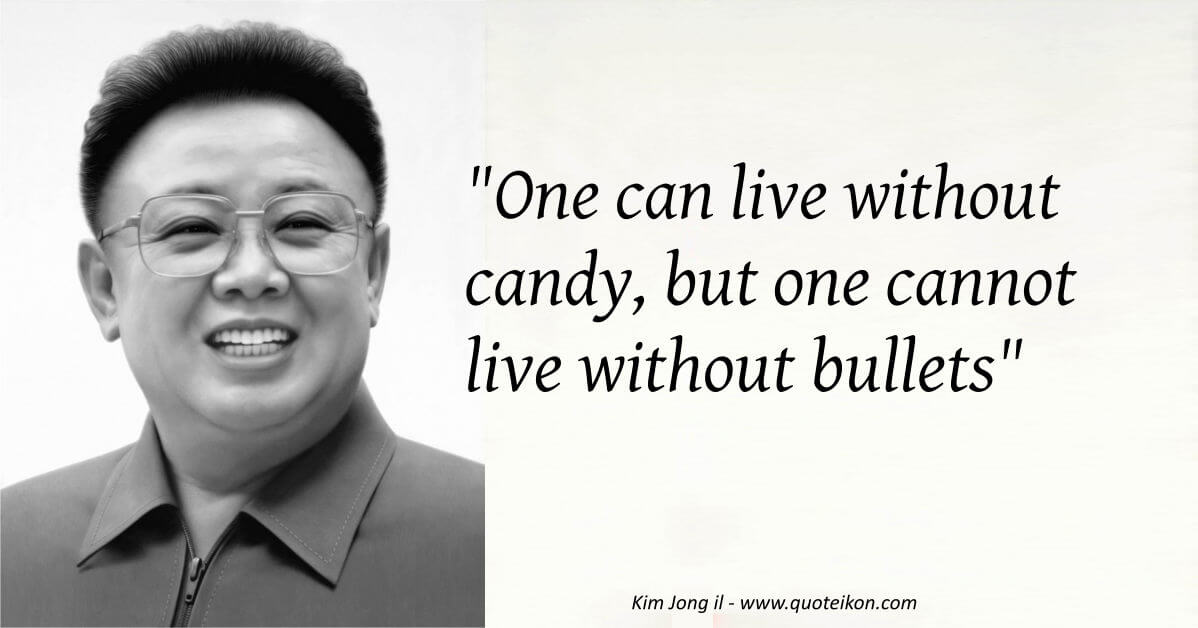